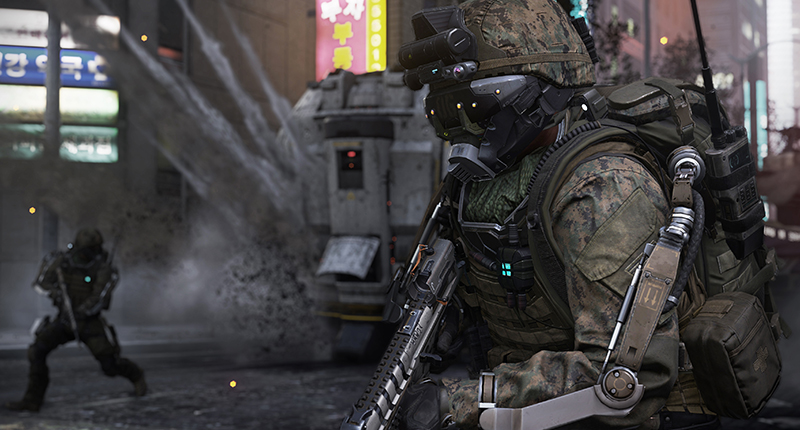 Call of Duty: Advanced Warfare is the FIFA of shooters. Year after year, its chosen development studio pumps out a bombastic sequel with similar plots attached to linear missions with little to no room for exploration. But this is Call of Duty we’re talking about, so following a successful, if not linear formula is par for the bullet-ridden course. While this years Call of Duty won’t stray far from the course, it is going to appeal to its core demographic: the 99% of gamers who just want to have a good time.

Sledgehammer Games, makers of Modern Warfare 3 are at the helm for Call of Duty: Advanced Warfare and the two levels on display demonstrated how expert they are at adapting the franchise for current-generation technology. Animations were realistic, sound design was ear-splitting awesome, and the ultra-modern setting (the year 2058 no less) brings the drone technology from Black Ops 2 into the far flung future, but adds Elysium-style exoskeletons to create the true modern solider. Buckle up Marine. Linearity can destroy a lesser game, but Call of Duty: Advanced Warfare embraces it with stylish panache. The first level, set in futuristic San Francisco was an interactive Michael Bay action film a thousand times more dynamic than the Transformers director could ever imagine. It all begins with a fellow soldier staring you dead in the eye, explaining how the muscles animate on his face, and how his pupils even dilate (it was an E3 demo, some boasting was required). Call of Duty: Advanced Warfare kicks off in a drivable vehicle with the player at the helm of an ATV with a pulse cannon, blowing away baddies while dodging incoming traffic. The game fails to impress until the on-foot action starts, then it all clicks into place. Call of Duty: Advanced Warfare is a rock concert with submachine guns and Sledgehammer Games puts you right in the front row.

Sound design is exceptional, and this is the first time gamers will truly be able to hear how the future sound. Bullet casings ping against the floor, granite explodes from cars wheels and scrapes the metal as you careen through traffic, and explosions deafen when triggered. Outside of the highly-detailed graphics, which are expected, the sound dazzles the ears. This is how games were meant to sound.

As the San Francisco level progresses, Call of Duty: Advanced Warfare gets to show-off a few new tricks up its sleeve. Firstly, grenades come in one, multi-selectable flavour, allowing the player to rotate through grenade types kind of like the way Judge Dredd would select different bullets within the same gun. It’s a smart tactic which sees a new grenade, an enemy detecting one, being launched into the air to highlight foes before you pick them off with a noisy machine gun. Outside of this weapon, there was also a laser rifle, and that’s about it. Sledgehammer Games was coy with its arsenal.

The first level peaks after a brief firefight, which ends in the Golden Gate bridge spectacularly crashing. Before this though, the players new ability to jump like Super Mario is demonstrated. It’s a little gimmicky, but fun to watch nonetheless. Hopefully it’ll be more of a tactical advantage in the full game. The second playable level was a sneaking mission through a forest, and was also the most boring part of the demo. It’s a stage Call of Duty fans have played countless times. Avoid spotlights, silently knife enemies and follow a friend to safety before repelling into a base. Even an invisibility cloak and mechanised soldiers can’t spice up this bland section. Luckily, the player eventually meets up with other cyber soldiers and the second half of the stage kicks in. From here, it’s Call of Duty by the numbers with a few interesting additions, namely the mute bomb, or whatever it’s really called. So as to not break stealth, a land mine which muffles sound in the near vicinity can be quickly activated, lending a new degree of strategy to what could have been a mindless shooting section. It breaks up the action quite nicely.

After navigating to a server room and downloading data (it all feels very familiar), it’s into a future tank where one of the many expected on-rails sections begins. It’s “hold fire until the level ends” and business as usual for Call of Duty: Advanced Warfare fans. 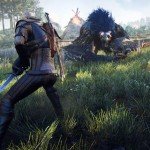