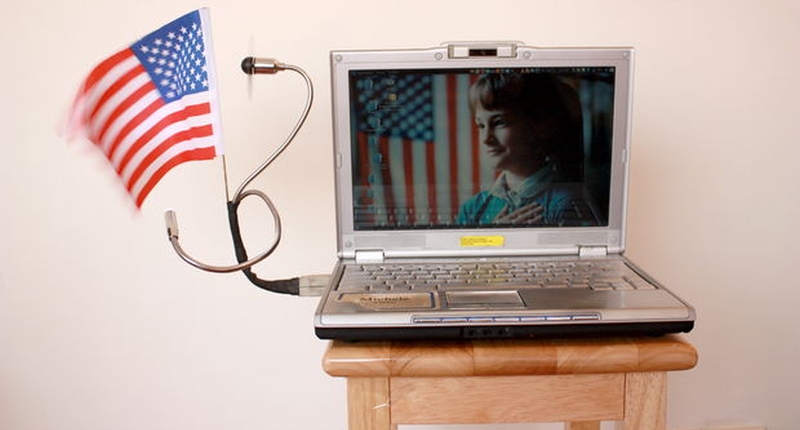 When John Hancock signed the Declaration of Independence back in 1776, the term “technology” probably encompassed what was then bourgeoning stream engine technology and the quill used to sign the parchment. Nearly 350 years later though, as Americans gear up for the celebration of this day, technology is an integral part of their and the world society in general. As the homes and streets from New York to Los Angeles are painted red, white and blue, why should techology not follow suit and take part in the celebrations?

Here are nine of the most patriotic, America-loving, Fourth of July-celebrating gizmos and gadgetry collected from around the web. This little MP3 player, while proudly flaunting an American flag exterior and a star-shaped navigation pad, also features 15 pre-loaded “patriotic songs.” Users reviewing the device noted that said tracks included classics like James Brown’s “I Feel Good” and KISS’s “Rock and Roll All Night.” The ZVUE Spirit, although packed with an underwhelming 1GB storage, is about as small as a matchbox and currently retails on Amazon for US$149, or US$20 second-hand. To enjoy these tracks, one would undoubtedly need a pair of earbuds to match. iPopperz American flag-brandished in-ears are perfect for the post-Independence Day wind down. The Florida-based company Konoaudio distributes these gems, and can be had on Amazon for around US$10 each.

The statue donated by the French has become a symbol of New York City and the US as a whole. This lighter lets users carry a part of her torch wherever they go. Although one can’t exactly connect it to the internet or send selfies from it, it is no less inspiring.

This is perhaps the most essential Independence Day gadget. The little jewelry-box sized contraption is an absolute example of patriotic tech in the flesh. Pressing a button turns the device on and the flag, attached to the top of it, begins to ceremoniously wave. After a few seconds, a stirring rendition of Star Spangled Banner is belted out through its speakers. It can be used in total darkness too, as it features a tiny light projecting onto the flag itself. If the previous gadget proves difficult to find (which it does), what could possibly be more patriotic than building your own version? This DIY Instructables version of the memorial also features a flag, a light and a little fan, and runs on the same fundamental principle. However, instead of sitting on a desk, the user can use it directly from a laptop via two USB ports. The author of this Instructable humourously notes that this contraption turns your PC into a “patriotic computer.” Of course, once it’s complete and plugged in, the final step is to “take off your hat and place your right hand over your heart.” There are many companies that produce skins for headphones, but this particular example puts the American flag on users’ beloved Beats. Design Skinz will coat the headset in the red, blue and white flag for around US$19. It’s perhaps a more stylish and tech-based solution than simply donning an oversized Uncle Sam hat.

Speaking of influential American figures, Krusty the Clown is one often overlooked as an anti-hero in The Simpsons. He is, however, more a symbol of American spirit than Homer or Bart could ever be. This particular Krusty figurine doesn’t quite provide buyers with a sterling rendition of Star Spangled Banner, or even a James Brown track, but it does belt out a Krusty-sung version of Rick James’ “Superfreak”. Patriotic? We think so. The generically-named “USB-Flashdrives” is a company that produces custom USB drives for those who are so inclined. Customers can choose anything from a former president, to the Grand Canyon or a bald eagle. Our favourite undoubtedly, is this little Obama caticature. Back in 2011, the company brought out this edition that, as its site recalls, “went down very well with the Democrats, but not so much with the Republicans.”

Last but not at all least, Independence Day should be followed by a massive fireworks display. In fact, nearly every major city in the nation prepares stockpiles of pyrotechnics to light during the post-parade celebrations. But fireworks are dangerous, loud and often scary for kids.

The children’s adventure toy manufacturer, Uncle Milton, has developed what it calls the “Fireworks Light Show” especially for children’s Fourth of July enjoyment. Essentially, it’s a lamp and laser tube that projects firework-like lights onto any reflective surface. Children can adjust what type, colour and effect they desire for each firework, without all the usual accompanying mayhem.

Have you come across any patriotic gadgets recently? Let us know in the comments below. 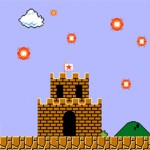