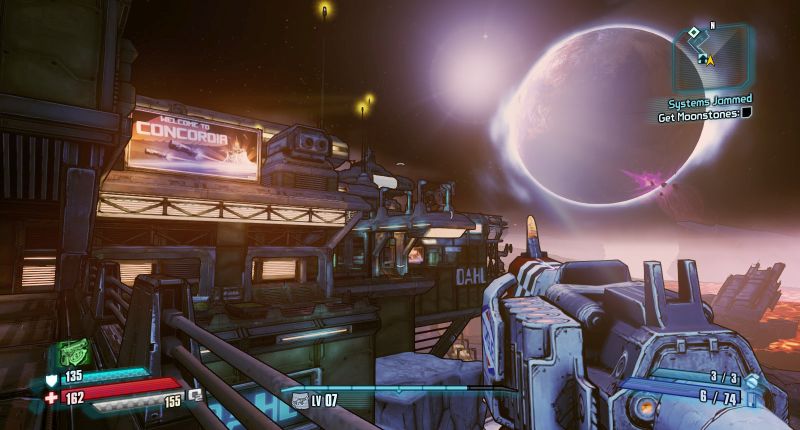 With such an unusual name, you can expect a unique game. That is exactly what the new Borderlands is, and in the best way possible. Shoot n’ loot your way across the desolate but flamboyant landscape of Elpis and witness the rise of Handsome Jack from a sharp-tongued coward into an even more sarcastic ultra-villain.

Borderlands: The Pre-Sequel! (BLPS), awkwardly nestled between its predecessors, stays true to the odd but winning recipe of excessive bizarreness but does not come without its new twists and turns that keeps the gameplay fresh and exciting. This role-playing shooter is one that is sure to leave you with a pleasingly devious grin across your face.

Welcome to Elpis, the moon of Pandora. This unforgiving location used to be the setting of a Dahl mining operation but was eventually abandoned because of an event known as “The Crackening”, leaving it vacant for the scum of the universe to inhabit it and turn it into their own chaotically twisted circus of misconduct. In a nutshell, the story of BLPS follows the rise of Handsome Jack, the main antagonist of Borderlands 2, and the Hyperion Corporation. But in this title he’s friend, not foe. He is still armed with his cutting wit and arsenal of insults, but it is now directed at your enemies instead of you.

The game introduces a whole bunch of new, rich and memorable characters. As always, the script and dialogue are brilliantly written and the characters feel alive and leave a potent impression on you, be it good or bad.

BLPS opens up with a bang and quickly reminds us why we fell in love with Borderlands in the first place: insanity, absurd humour and a shooter where anything goes. The action-packed opening cinematic really got my adrenaline pumping and is probably one of the most entertaining introductions I’ve ever seen in a game. It reveals the four Vault Hunters you can choose from, all of whom were unplayable characters in the previous games, and in such a bad-ass way that I had a damn hard time choosing who I was going to play with. Your four choices are:

Wilhelm as the Enforcer (the tank), Athena as the Gladiator (warrior class), Nisha as the Lawbringer (assassin) and Claptrap as the Mistake (a class that’s hard to pin down). Each class is extremely versatile and fun to play with. BLPS still boasts that unique and distinctive visual edge of a brilliant and vividly colourful graphic novel. But this instalment takes you away from the familiar desert landscapes of Pandora and drops you on its moon, Elpis.

Elpis is a harsh and unforgiving place plagued with an abundance of dangers such as wildlife, bandits and mercenaries, all of whom will kill you simply because they don’t value the shape of your face. There is no oxygen on Elpis and barely any gravity, with only the most unsavoury of characters dare to inhabit its surface.

You can see that there was a lot of hard work put into creating the new gaming environment of Elpis. This large and immersive world was constructed with great detail and immediately transports you into a remarkable action fantasy. The game world is quite large and you be navigating in and out different sections of Elpis as you explore the environment and complete missions.

Although, after spending some time playing the game, you will start to recognize patterns in events and enemy reactions and it does make the game seem exceedingly repetitive as you progress. Luckily most of the narrative and the wealth of missions do keep the game exciting, even though most of the time you are running, gunning and collecting loot.

If you look at the big picture, BLPS is still the trademark shoot n’ loot badlands adventure game it always was. It was and is a winning formula that will more than please die-hard fans of the previous games. But, even with the new gameplay features, there is a healthy selection of us who would have loved to see a bit more innovation. That being said, the changes that were made are definitely welcome and does provide the gamer with a somewhat fresh experience.

For starters, we move away from Pandora and are transported to its moon. It has extremely low gravity and lacks the presence of any breathable air, which in turn increases both the difficulty and the fun-factor of the game.

The addition of low-gravity is a love/hate feature of this title. It enables you to leap great distances that make for some intense combat moments or for making up loads of ground when you’re on foot. But it can get pretty annoying after a while as the low-gravity is always present. Sometimes you only want to climb a small ledge and you will find yourself frustratingly drifting miles into space. I would regularly use jumping as an evasive manoeuvre in most games. But if you jump in this game, it could lead to you being lengthily exposed to enemy fire and there’s not much you can do about it. Also, in lots of instances, when you open certain containers the loot will speedily fly off into a direction and disappear into some lava-filled crater. Yes, I have died many times thanks to my looting addiction.

Because there is no oxygen on Elpis you will see the addition of an O² tank in your inventory. O² tanks provide you with a limited oxygen supply so that you are able to explore the lunar surface. It can be replenished by stepping into any building, the affected zone of an atmosphere generator or standing on oxygen cracks that exude a purple gas.

Oxygen tanks can also be used to manoeuvre around while in mid-air. But it can only be used once in the air and it depletes a liberal amount of your oxygen when doing so. This can be a problem in battle as when your oxygen is depleted your health starts draining and in a combat situation it’s not always easy to reach a refill point.

To be honest, half of the time you will probably be busy gunning down enemies from all directions. Almost every inch of Elpis has some kind of threat lurking around the corner. The other half you will spend looting, selling and arranging your arsenal. This may sound repetitive but with the endless array of guns that BLPS provides, including the addition of laser guns and two new “Moon Buggies” (one with a laser gun, the other has guided missiles), you will be frothing at the mouth to try out these new tools of obliteration.

Verdict: Borderlands: The Pre-Sequel! is a brilliant escape from reality. It takes you into a remarkable cyberpunk fantasy that is filled with immersive action and memorable characters, a place where nothing and no-one is normal. The narrative fills in an entertaining part of the Borderlands series with the focus on Handsome Jack’s rise and will provide much nostalgia for Borderlands fans. As for gameplay, and even with the new added features, this installment doesn’t really feel like something innovative but more like a solid repackaging of its predecessors. 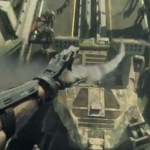