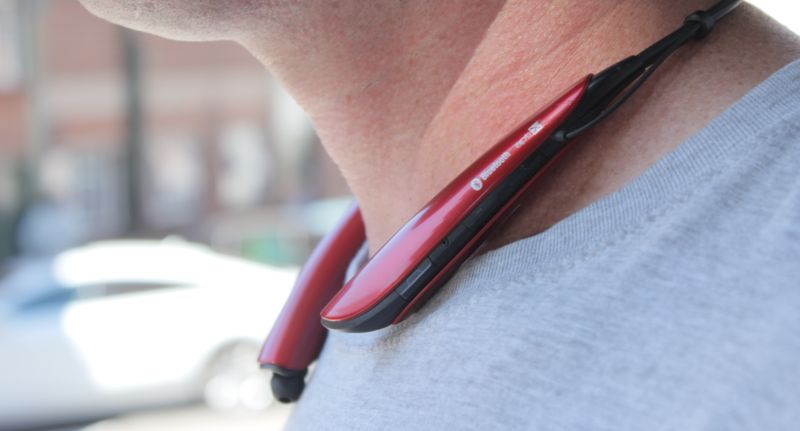 I’ve never liked over-the-ear headphones. For me, and many others, it’s an uncomfortable experience. Headphones squish the ears, keeping heat in and muffling noise. I’m an inner-ear music-listening kind of guy and because of that, I’ve been stuck with ugly, wired earphones most of my life. LG has a solution for people like me and it’s called the Tone Pro, a wireless stereo headset. Based on its price (US$69.99), battery life (15-hours plus) and design (it’s both comfortable and styled like a robot’s necklace), LG’s Tone Pro is an absolute winner.

The best feature of the Tone Pro is the clear audio with surprisingly meaty bass. I tested the Tone Pro with many different types of audio content: music, film and podcast all sound excellent with one niggle, that video content had delayed audio. My Tone Pro was paired with an iPhone 5, the LG G3 Beat and a no-name Android tablet; the issue was present in all three devices. The delay can be measured in milliseconds, but it was still enough to slightly irritate me. Standard audio playback was a dream. The Tone Pro has aptX sound, an audio codec made for streaming high-quality sound in real-time and the result is terrific audio playback. I only have one band on my phone, namely Radiohead, and they sounded just as depressing as ever. The initially confusing controls become second-nature after a day or so of use: there’s a call answer button on the bottom left, with volume controls just above it. On the right are the playback keys, with an on/off toggle hidden next to the USB charging port. None of this gets in the way of audio playback and because of the way the Tone Pro is designed — buttons must be hard-clicked — there’s no accidental button clicks to ruin the flow of the music. So audio playback is excellent, but video is left a little wanting. How about phone calls? Well, it’s a mixed bag. Bluetooth audio is not the best carrier of voice, but neither are the disgusting and outdated GSM networks we’re stuck with in backwater South Africa. VoIP calls, like with Skype, were perfection and the stereo wireless earphones made it feel as if the person was telepathically communicating with me. I do like the vibrating though, it’s a neat way of never missing a voice call. One bonus feature, and something I’ve never considered before, is the Tone Pro’s ability to speak GPS commands. Now, and when driving, I don’t have to look at the GPS anymore. Instead, Tone Pro speaks each step of the journey. “Turn left” she said as I aimlessly drove down Sandton. “In 300-meters, slight right” intoned the Tone Pro with the emotion of an android.

Audio playback is perfect, the 400mAh battery is long-lasting but voice calls are fuzzy and there’s some audio lag with video content. It’s the design which will sell it for most.

LG designed the Tone Pro well. It’s light, comfortable and hugs the neck without feeling cramped. It looks like a melted headset, but is worn on the neck like a fancy piece of jewelry. The two earphones magnetically attach inside the hollow ends of the Tone Pro and don’t drop out, even with a vigorous shake. With the Tone Pro worn around the neck, music is always at hand. Pluck the earphones from their magnetic placeholders, comfortably squish them inside the ear, start the music and relax.

Setting it all up meant holding the Call button for a few second and pairing my Android phone with the Tone Pro. I didn’t even have to do it twice, it just worked. After that, I kept it off unless I really needed it. And because it’s so damn light, I’d wear it all day without any hassles. That’s all I want from my technology. For it to work, and for it to operate without my even knowing about it. I cannot stress enough how excellent the design really is. The Tone Pro is 35-grams light and weighs as much a pen, or even the paper itself. You won’t remember it on your neck, it’s that good. In-ear comfort is also of the highest quality, and as such the Tone Pro comes with different-sized audio buds to fit even the roomiest of ear canal.

Best of all, no-one will know you’re using it. If you get the white or black model, it blends into your clothing. Those who select the fashionable red or blue will have their Tone Pro mistaken for neck fashion but the point is, it’s discreet. Verdict: Take it from me, this is the only wireless headset you need. I’ve tested Beats, Bose, Razer and many others, but none gave me the comfort or maneuverability of LG’s Tone Pro. I literally use it all day long, only charging it every other day. The price is right and the technology is even better. A must buy for audio fans who don’t like to advertise their choice of garish, childish headset. 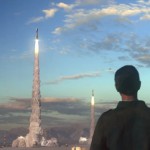