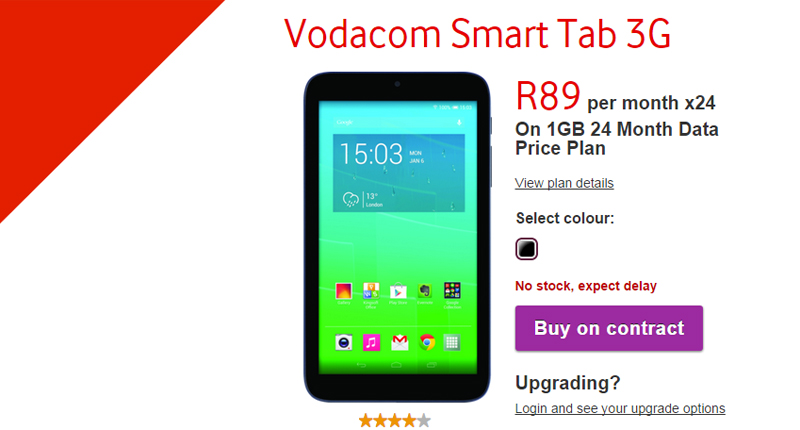 Two months after the launch of the Smart Kicka, an entry level smartphone retailing at R549, Vodacom has launched a 7-inch 3G tablet that will cost less than R1 000 and will, if the cellular giant is to be believed, also bring mobile connectivity to a whole new section of the South African population.

“Providing access in South Africa is not easy, but our strategy is to deliver access to everyone,” says Vodacom Chief Officer for the Consumer Business Unit Phil Patel.

The Vodacom Smart Tab 3G is available from today and can be purchased on a 24 month contract, starting at R59 a month, which includes 500MB of data. Prepaid users will receive 100MB/month for the first three months.

The Smart Tab 3G, which weighs in at 275g, runs on Android 4.4 KitKat and has 2MP rear-facing camera and 0.3MP camera on the front.

Compared with high-end tablets like the Samsung Galaxy Tab or the HP Slate 10 HD 10, the Smart Tab 3G’s specs might not seem that impressive, but it’s really all about the price.

The tablet is aimed at low income groups, particularly those living in rural areas and townships. If the 3G it boasts is not to be a wasted feature then, Vodacom’s much vaunted network upgrades will have to serve these areas as much as they do areas of urban wealth. If it’s really going to change the face of mobile connectivity, it also has to think about its data prices. The tablet might be cheap to purchase, but if the cost of data remains high, the low income market is still not catered for.

According to Patel, at least one of those problems will be solved. Its R9-billion network upgrade means that wherever there is currently 2G connectivity, there will be 3G connectivity in the future.

Patel is also not worried about the cost of data, stressing that, it will become less of a concern as time based and event based billing models is introduced. The plan is to get users to pay a flat rate for certain types of content.

Patel says that this will depend on the user and their habits, but packages that provide access to data based on the time consumers use it for will change the way entry-level smartphone devices are used in rural communities. 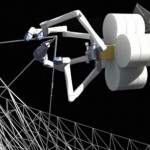