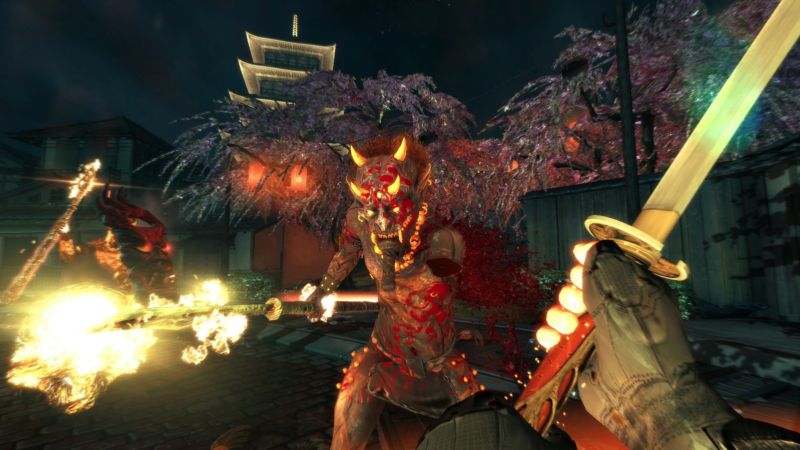 Games take themselves too seriously. Between the serious death and destruction of Mass Effect, Shadow of Mordor and Advanced Warfare, games like Hotline Miami, Sunset Overdrive and yes, the titular Shadow Warrior stand out as titles that just wanna have fun. So I’m here to tell you that Shadow Warrior, a remake of a fairly racist Nineties classic by 3D Realms, is fantastic fun. Here’s a game that doesn’t take itself seriously for even a split-second, even while you’re spinning through crowds of exploding demons with a fiery Katana.

(As an aside, is Devolver Digital the best games publisher of the modern era? They knocked out Hotline Miami, Broforce, OlliOlli and literally every other game of the last three years that had stellar gameplay. EA ain’t got shit on them.)

Shadow Warrior takes everything we love about gaming and packs it into one ten to twelve-hour journey. The star is Lo Wang, a corporate shogun sent to retrieve some legendary blade. He obviously does, and this kicks-off a demon invasion on earth, which is just really an excuse to fill each level with inventive enemies that actually break the standard shooter cannon-fodder tropes. Like I said Shadow Warrior is about fun and everything from the controls to the enemy variety is aimed at keeping you happy from start to finish.

Let’s begin with the negative: Shadow Warrior is a port of an almost year old PC game and at times, it really does look like a game from a year ago. Shadow Warrior definitely doesn’t push the PS4, but at least it kept it at 1080p and at a buttery-smooth 60fps throughout my playthrough (the Xbox One port is only 900p, so get the PS4 version if you want the best experience). This is also quite the “old skool” game, in terms of structure and control. Murder a room of enemies, open a door, defeat a boss, move on. Controls are also extremely convoluted and for the initial few hours you’ll be slashing and shooting without much precision. Also, it’s single-player only.

Happily, these negatives quickly become exceptional positives as the game progresses, as the linear levels and tight controls funnel you from one fight to the next. Let’s discuss the story briefly because it surprised me with its richness of plot. Shadow Warrior‘s hero, Lo Wang begins as a silly caricature of every Asian gaming protagonist ever: tattoos, a funny accent, a penchant for violence (with honour), connections to crime cartels, stuff like that. But, Lo Wang slowly develops into a genuine hero throughout the course of Shadow Warrior in a way that actually surprised me. Wang is incredibly well-written and along with his sidekick demon pal, represent one of the funniest pair-ups in recent gaming history. Wang quips throughout and becomes supremely powerful, but even during desperate times, he’s always throwing out a light-hearted pun. Seriously, he’s cool as balls.

And those convoluted controls I mentioned, once learned become the best part of Shadow Warrior because this is a shooter more comfortable with melee attacks than shooting itself. Yes, you read that correctly.

Shadow Warrior‘s melee controls are perfect. Your Katana becomes an instrument of pure death as it dissects hordes of demon scum. Once you’ve upgraded it a-slight and learned a few special moves, a room of enemies becomes a playground of death as you attempt to get the best score as possible. Yup, each fight gets rated up to a maximum of five stars (or shurikens) depending on how stylish your skills are. While there are loads of interesting weapons to use and upgrade — quad barrel shotgun anyone? — Wang’s Katana is the star of the show and was the weapon I used most often. It’s extremely fun to use and makes light work of every enemy in the game. Shadow Warrior may look slightly dated, but at least it’s inventive and ultra-colourful, like a rainbow-pastiche nightmare brought to life. There is never a dull moment, in terms of graphics and gameplay. Imaginatively-designed demons bleed from every inch of the fairly short stages. Sparks fly when swords meet. There’s a constant stream of explosions, colours and sound, and you can really feel that the developers wanted to keep your interest high. It pays off as there is literally never a dull moment to spare.

Yet as I said earlier, Shadow Warrior is single-player only and after two-to-three playthroughs it’s game over, man. Thankfully, you’ll love every second of it.

Verdict: Tired of games letting you down? Bored of the same old shoot, run, repeat? You need Shadow Warrior in your life. The PS4 port the year-old Shadow Warrior is an instant classic and my vote for the most-fun game of the year. 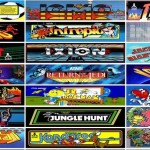