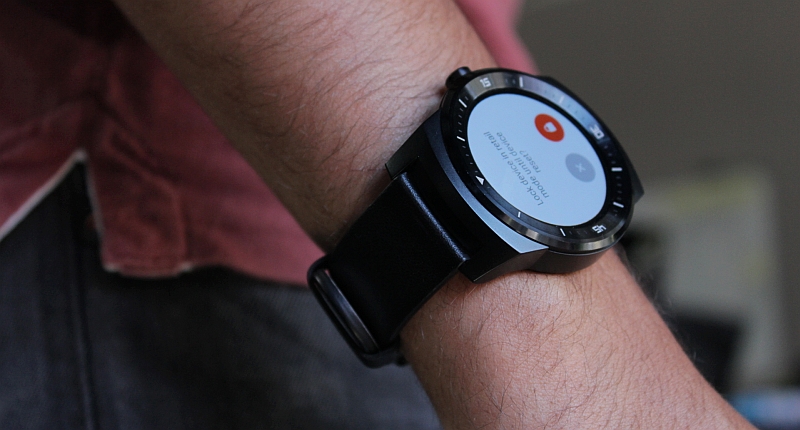 Smartwatches. What’s the point? I can’t think of another piece of technology that’s more superfluous to its wearer — perhaps only a shoe made entirely of shark teeth. Or electric can openers.

There’s just no dire need for them, but hell, they’re clearly here to stay.

With the likes of Apple jumping aboard the wristpiece train, there’s very little chance of the industry slowing down now, but there are companies that have been trudging away in the space hoping for some type of miracle sales breakthrough. LG is one.

It has had some glorious smartwatch ideas in the past, like the LG Watch Urbane for super-executives who don’t quite fancy fruit or companies named after them.

For the commoner — there’s the LG G Watch R — a timepiece that’s perhaps the most traditional of its generation, but is it any good?

Well, let’s begin with the boring and tedious task of the unboxing. While Sony places its SmartWatch 3 in a plastic cube which is all types of ceremonious, LG G Watch R arrives in a rather plain black box. It’s not as protected from bumps as the Sony SmartWatch 3 either, and while the box is decidedly smaller it means that the added cables and charger are all a bit cramped.

Included in the box is a wireless platform charger which uses the joys of magnetism to transfer juice to the watch, a microUSB cable and a small travel charger, similar to those packaged with LG’s smartphones. The charger was a lemon but luckily we had a spare LG G3 charger in the office, which was nearly identical to the faulty unit. Faulty chargers aside, once this watch is out of the box and on an arm, it’s extremely difficult to tell the difference between it and a traditional watch; that is until the bright OLED face is alight. It looks like it’s mechanical gear-powered cousins, and that’s definitely a good thing. It appeals to the more rugged wearer too, with its sports watch-like aesthetic.

Going back to the screen — honestly, it’s utterly gorgeous. It’s crisp, colourful and boasts deep contrasts akin to its much denser smartphone cousins. It works well in sunlight too but doesn’t give the LG G Watch R “smartwatch” tag away immediately. It all looks rather traditional from afar, and that’s LG’s theme throughout. The strap, albeit interchangeable, is classic black leather with a nude suede inner. It’s fairly comfortable to wear but does cause the watch to slide a bit on the arm. Notches are placed as sensible intervals, but I did need to adjust it every so often during the day.

While specs really shouldn’t be the be-all and end-all of smartwatch design, it is perhaps the one area where these little wrist cuffs are different.

LG has done well to shove a smartphone SoC into the watch — the Qualcomm Snapdragon 400 — that usually powers the likes of Lumias. Alongside it there’s 512MB of RAM and 4GB of internal storage to boot. There’s plenty of power and room to expand should Android Wear grow into a monster like its smartphone OS cousin. On the battery front, a 410mAh reservoir keeps the lights on while that circular OLED screen is undoubtedly the star of the show. Unlike the Moto 360‘s screen, the LG G Watch R employs a completely round 1.3-inch 320×320 screen and you can definitely tell.

The watch boasts an IP67 rating, which means its shower safe, and has a reasonable weight of 65g.

Android Wear isn’t a demanding OS, and with the Snapdragon 400 the LG G Watch R just breezes through menus and swipes. There’s also plenty of storage available for future Android Wear expansion, and 512MB of RAM is simply more than enough for a smartwatch. In terms of more practical performance markers, I had a number of issues with the device’s sensors.

The accelerometer struggled to notice my wrist position; so holding the watch up to my face didn’t switch the screen on automatically. For something that has “watch” in its job description, I was damn annoyed with this quip. I had to constantly tap the screen or leave it alight which didn’t do much for the battery life.

The battery life isn’t shocking though, and will keep up with you for much of the day. And as far as charging goes, it’s quite a pleasure with the wireless charger. Is it necessary? I’m not too sure, but it does make charging the device without the little magnetic marvel impossible.

Other sensors, including the altimeter and the heart rate monitor weren’t accurate either, with the former requiring a constant reset and the latter an overly tight fit. In brief, the LG G Watch R is rubbish as a fitness tracker. Finally, the real question is whether smartwatches are at all useful. Even though the LG G Watch R is a great attempt, I don’t see a need for it at all.

The included watch faces are useful for campers, hikers and runners, and if you’re particularly concerned about style, there are the stately faces available too.

As with all Android Wear watches, there’s the usual barrage of notifications that’s smartwatches’ bread and butter, but if picking up your phone to check notifications is too difficult, you really should rethink your life.

With that said, the LG G Watch R does what it does extremely well, except for the annoying niggles. As a “smartwatch”, it’s fairly usable and thanks to its waterproof rating, it’s not a device you’ll feel the need to remove when at the beach or in the shower. And as far as physically wearing the watch is concerned, it’s not a leaden weight. It’s fairly comfortable.

For around R3000 on the Orange Store, it’s a pricey piece of hardware considering its limited use cases and scenarios, but that can be said of practically every smartwatch too. For what it does, it’s one of the more pleasant smartwatch experiences I’ve had, but I would still wait a while before taking these devices seriously.

Of course, if you love the idea of having a wrist-worn personal assistant, the LG G Watch R is a fine choice. Verdict: While I won’t be manically sprinting to the store tomorrow with R3k in my hand, the LG G Watch R is a solid device and deserves credit. LG took what watch lovers appreciate to heart, and crafted something that’s both high-tech and tastefully traditional. With that said, its array of sensors often let it down and because of that, the Sony SmartWatch 3 would be a much better prospect for fitness fanatics. But if you’re looking for something stylish, the LG G Watch R won’t disappoint.