By Andy Walker, former editor
Read nextStar Wars: Battlefront should be playable on most gaming PCs 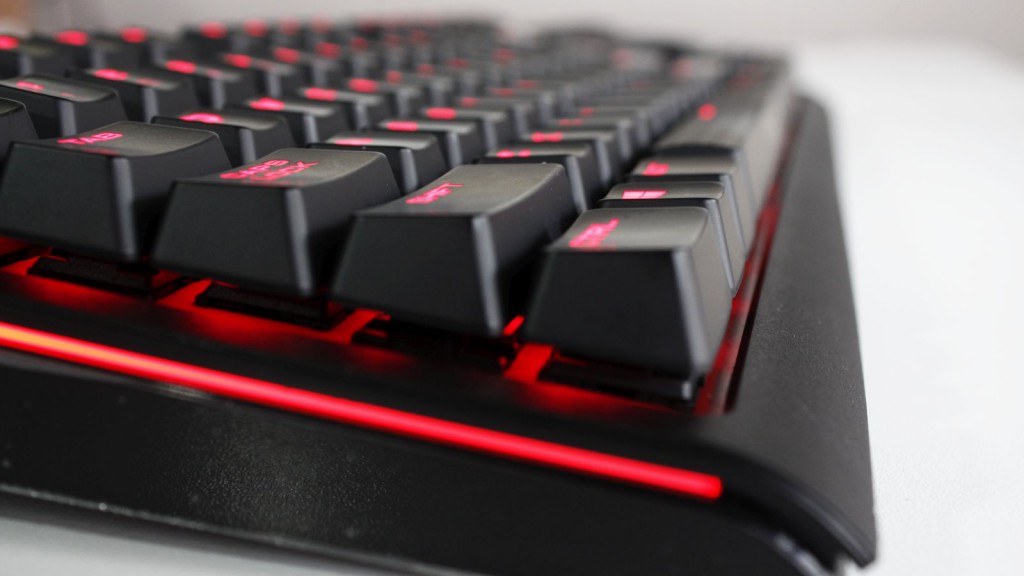 “Are mechanical keyboards worth it?” is a question that might get you a black eye at your local LAN, but it must be asked. The average non-mech board is about as good today as they’ve ever been, and are just perfect for the weekend angered play session. So why go mechanical?

The likes of Logitech and Razer have outed some seriously good mechanical boards recently, with the G910 Orion Spark and the BlackWidow doing both companies proud, but Corsair is responsible for the latest device in this hotly contested space. Its Corsair STRAFE keyboard is possibly the most hyped product we’ve seen from the Fremont company, but can it live up to it?

Donning the company’s new simplified sail logo, the STRAFE looks a lot like the Corsair K range without the hand rest support. It’s understated, but decidedly aggressive and angular. It should look flash alongside any monitor and mouse setup without outshining your rig.

It should be noted that the STRAFE is supposed to occupy the budget end of the mechanical keyboard game, while offering users a better-than-non-mech keyboard feel. For one, Corsair doesn’t shirk on the hardware, donning each key with a Cherry MX switch with LED backlights to boot. You have a choice between Cherry MX Reds or Browns, depending on your fancy.

I’m not entirely sold on the Cherry MX keys, namely because they tend to be too sensitive in moments I don’t particularly need them to be. The G910 seemed to be the opposite with its custom Logitech-developed switches, so when will we find the middle ground? Still, credit where its due: they are tactile, responsive, consistent. But we’ll get onto this a little later.

Beyond the switches, the STRAFE does boast some nice user-orientated features, including a USB plug at it’s rear and an extremely long cable with yellow-tipped sockets. I had trouble winding it down behind my desk thanks to their bamboo shoot-like rigidity, but the length is definitely welcome if you happen to host your rig on the floor (shame on you if that’s the case).

You’ll need two free USB ports for the keyboard, mind, so take note when purchasing this bad boy. But if you’re spending the best part of a grand on a keyboard, I’m sure you’ll have a few ports to spare.

What is comforting is the sheer weight of the board. It’s around 1.2kg, which means it won’t be sliding around on that slippery desk of yours any time soon. The large rubber feet at the base of the unit also helps. The feet also prop up from the top corners’ periphery, but they aren’t adjustable, so get a few old PlayStation 2 CD cases to prop it up if the angle isn’t sharp enough for you.

There are also a row of dedicated media keys as well, hosted on the F8-F12 column. They’re nicely positioned, and provide in-game media changing without the need for pre-programmed hotkeys. Within the Corsair Utility Engine software, these can be adjusted too.

But enough of that. Let’s talk performance.

If you’re looking for a keyboard with faster response times than you, you’ve found it. Corsair claims that the STRAFE has a 104 key rollover, which means you could play this thing like a piano without ghosting. Reliability approaching 5-million keystrokes is also gives the aggressive gamer peace of mind.

While we all love responsive hardware, I found the board a little too dainty in that regard for me. I had to hang my finger above keys before each stroke just in case I struck the wrong one. It’s horribly annoying, and while I do enjoy the larger key caps, they’re just too trigger happy.

Yes, each key stroke fills the user with a wave of satisfaction just knowing that there are actual pieces moving around beneath those key caps, but it’s not conducive to flowing combat in fast faced RPG melee combat. Sure, one could say that it’s a learned experience jumping onto a Cherry MX board, but I just couldn’t find my happy place. I never grew into it.

This isn’t a keyboard for mundane office drudgery either, but if you are going to do the heinous task of drafting a Word document on your gaming rig, you might want to swap it out for a keyboard that’s less sprightly.

And while Corsair does bolt niceties onto the board itself, it lacks a few gaming keyboard essentials, like dedicated hot keys.

The company has given its software free reign of the keyboard from head to toe, letting users program each button to suit his or her will, but this doesn’t quite work when games have their own dedicated keys. I love macros, but I don’t want to have to reprogram a key just to forget that I reprogrammed it half an hour later.

Nevertheless, the software is quite a piece of work. It’s as dense as a Christmas shopping list, and allows you to change practically anything regarding the STRAFE’s user features. Lighting can be adjusted to form waves, selectively glint upon key stroke or simply remain on regardless, while there’s a dedicated tab for macro editing and creation. Finally, Corsair has ensured that its suite works with pretty much all devices in its latest range. So if you have a Corsair VOID and a STRAFE, you don’t need two separate (and conflicting) versions of the same package. It’s on point.

But I have to go back to my initial question: do I, as a non-professional gamer, need a mechanical board?

The answer is a resounding no. Do I want one? Of course, but only because when one appreciates the technology and amount of R&D that goes into these things, it’s truly astounding. With that said, the Corsair STRAFE didn’t strike me as a must have this holiday season. It’s a nice keyboard, but I definitely wouldn’t consider it a linchpin of my gaming setup.

In terms of competition, it spanks the Razer BlackWidow as well, a keyboard which in some cases is actually more expensive, and undercuts the Corsair K series too. If you’re particularly against green things, the Corsair STRAFE should be your next buy.

Verdict: Impressive when evaluating the competition, the Corsair STRAFE didn’t leave me in a happy place. Every day usage was terrible and I didn’t feel as comfortable on it gaming as I have with other boards. While the technology is there, some design considerations left me scratching my head. Still, you could do a lot worse when choosing a mech keyboard, but ask yourself how badly you need one first before parting with your cash.

Our Corsair STRAFE review unit was kindly provided by Frontosa.