For more Microsoft announcement news, have a look at our dedicated Microsoft portal here.

There are few things that sell less impressively than wet paper bags in the smartphone world: BlackBerrys, and Microsoft Lumia devices, but the latest device from Redmond will look to change the latter’s credentials.

The Microsoft Lumia 950 XL was previously leaked, and leaked again, but now that its parent company has finally announced its existence, it looks a sharply impressive package.

Microsoft’s also adopting the two-antenna technology, something that Huawei does in its P8 already. It switches to the antenna with the strongest signal accordingly.

The 950 uses the hexacore Snapdragon 808 SoC, as well as a 5.2-inch screen (over 500ppi) but some other little additions makes this phone interesting. There’s a USB Type-C connector on both phones. That’s 5Gbps of info, additionally, faster charging times. Half an hour equates to around 50% charge.

Moreover, there’s the Glance Screen Technology which allows the phone to switch the screen on momentarily when the user picks the phone up. The company claims that it uses less battery and is more user friendly than unlocking the phone each and every time.

Of course, this all integrates with Windows Hello facial authentication software, which makes it a tad more secure than what it seems.

Microsoft also demoed the universal dock, which uses the USB-Type C port’s bandwidth for good effect. Plug the phone into the dock, a keyboard, mouse and screen (via HDMI or DisplayPort, and uses the phone as a pocket PC. Judging by Bryan Roper’s demo, it works impressively well too.

And if you’re wondering just how well the processor and GPU handles all of this, Microsoft uses “tablet class liquid cooling” within the devices to keep them cool. And speaking of which, Windows 10 is obviously the highlight of the device (at least in Microsoft’s eyes), the phone’s hardware is fairly impressive.

Both phones will be available from November, but the 950 XL will be US$100 more expensive at US$649.

Microsoft is also making the Microsoft Lumia 550 available, at US$149, its a much cheaper smartphone and takes care of the lower edges of the Lumia range. 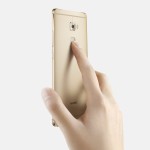