More
Home
Subscribe
Skip
Continue in 10 seconds
Skip
By Staff Reporter
Read nextOn remakes and remasters: all for the money, or some for the gamer?

BlackBerry has finally gone over to the dark side. In a bid to find some relevance in our smartphone world dominated by iOS, Android and Windows, the company has just released its first Android smartphone.

While most of its features are on par with that of your latest Android smartphone sporting Lollipop, there are a couple of areas where the tech giant is hoping the Priv will really shine through.

True to its legacy, the Priv comes with a slider QWERTY keyboard. Like the Passport, this physical keyboard is also capacitive and supports swipes for additional navigation options. Flexible to the demanding and diverse Android crowd, you can also opt to install keyboard apps like SwiftKey of course, and just keep the physical keyboard tucked away.

In terms of hardware, the Priv has kept the modern consumer in mind. The big 5.4-inch AMOLED display comes with curved edges, and sports a resolution of 2560 x 1440. The 1.8GHz 64-bit hexa-core Qualcomm Snapdragon 808 processor sits alongside 3GB of RAM, 32GB of storage and a microSD slot — more than enough to continue your Candy Crush Saga game or binge on all of Adele’s songs. It also carries a two-megapixel front camera with an 18-megapixel snapper at the back.

When it comes to security — an area used to sway its enterprise clients and NSA paranoid — BlackBerry promises state-of-the-art privacy (see where the name comes from now?). The smartphone, for instance, comes preloaded with WatchDox private file sharing, BBM Meetings for private conferences, and SecuSUITE which enables private voice calls.

The Priv also features BlackBerry’s DTEK which monitors apps and processes in real time to provide an overall security rating for your device. BlackBerry’s Hardware Root of Trust moreover protects the phone against rooting, meaning that it can’t be tampered with. 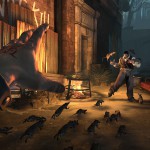 On remakes and remasters: all for the money, or some for the gamer?
Gaming • 6 Nov 2015
Read More
More