FTTH, or fibre to the home, is a term we’re going to hear a lot of in South Africa in the coming years.

Copper cables, although serving the world’s internet needs for so long, are slowly growing too old and dim for our insatiable bandwidth needs. As a result, the world’s connectivity boffins have realised that using fibre optic cables can increase the internet speeds between two points significantly.

Although undersea cables have used this technology for decades, fibre to the home is slowly becoming a reality thanks to South Africa’s internet service companies, a growing hunger for more data on the continent, and the dropping prices of internet connectivity. But perhaps the most important question to ask is: how will fibre to the home benefit the consumer in particular?

If you’re a gamer, fibre to the home might appeal to you more than most.

Ping is a swear word within gaming fraternities, especially those who live and die by Call of Duty or Halo. It’s a sensitive topic that can mean the difference between an enjoyable game, or you flinging your keyboard through your monitor in frustration.

Essentially, it’s the time it takes one packet of information to reach a server, introduce itself and report back to the client, and the more time it takes, the more issues gamers run into. In some instances, it can mean dropped information (which means less game updates in real time) and in extreme cases, servers kicking the gamer out completely (like in Battlefield 3 where high ping times are an unfair advantage).

Fibre cables running the length and breadth of the world, replacing copper in every sphere, should reduce ping times noticeably, especially to servers that are hosted on home soil. And even if that is still a few years away, fibre connections should be generally faster when connecting to local servers.

Thanks to fibre cables that use blasts of light to transmit data and not electronic impulses, sync speeds on fibre are generally much higher than copper.

Anything in the region of 100Mbps to the home is attainable which means that a 1GB video can be downloaded well within a minute. And a game? Well, there’s no longer those aching waiting times for DLCs to download or for your console to run its life-giving updates.

And downloading content is part and parcel of being the modern gamer. A good example was Tony Hawk Pro Skater 5. Released as a bundle of just under 5GB, Robomodo, its developer, published a patch of 7GB the following day. Games like Just Cause 3 promises to be around 43GB while Halo 5: Guardians, the next big Xbox One blockbuster, stands at 60GB.

Recent news also suggests that Halo 5: Guardians‘ multiplayer segment will be not be part of the disc purchase, and will instead be a 9GB download.

Generally, AAA games are all above 15GB in size, so a faster download speed will mean that you’ll have more time to play the game instead of waiting for it to download.

A slower connection means that less information can travel between your computer or console to the server, which means games can’t exactly update information such as player location in the map as quickly.

Any connection above 4Mbps is generally recommended for games, but as titles become more graphics intensive, that benchmark will soon rise beyond copper thresholds, which means that sooner or later, a fibre line will be needed.

As a gamer, it’s also great to know that you won’t suffer from sudden drops mid-killstreak because your internet connection decided to take its tea break early.

So fibre to the home, as it infiltrates modern homes of South Africa, will likely become the next internet connectivity standard within the coming years, and gamers will benefit extensively.

Fibre in Your Future, brought to you by Vodacom Fibre, is a series of four articles that will appear across the Burn Media group of sites. Whether you’re an occasional browser or a super-user on multiple devices, Vodacom Fibre has a perfect plan for you. 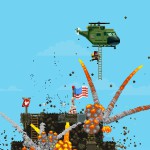