If you’re a gamer then you’re no doubt salivating about the prospect of playing games in Virtual Reality (VR). No longer will you have to sit ‘outside’ the game, pressing coloured buttons on a controller, watching your exploits on a flat screen. With VR you’re inside the game, naturally reacting to and interacting with objects and environments. No longer will you merely play the hero, you’ll be the hero. But we’re still in the early stages of VR gaming and VR tech and we’re still figuring out what works and what doesn’t. Here are the good, the bad and the ugly of VR games right now for both the Oculus Rift and the HTC Vive.

Perhaps a good starting point would be to explain one of the major challenges in creating content (games or otherwise) for VR right now. That challenge is nausea. It’s surprisingly easy to make a player queasy. Your brain expects certain conditions to be met when you move your head around. While in VR, if you look left your brain expects the images it’s receiving from your eyes to change accordingly and at a certain speed. When this doesn’t happen you’ll feel sick and that’s a sure-fire way to kill any experience.

With this in mind let’s explore some of the games available for the Oculus Rift right now. The first game I played on the Oculus was ‘Affected’, a simple horror game where you have to make your way through a haunted house.

It’s absolutely terrifying. I was sweating fear after the final scare. But moving around (I used a mouse and keyboard) kept me from feeling entirely immersed in the game. Just like in normal FPS games the mouse is used to change where you’re looking and the WASD keys are used to move forward, left, right and backwards. Changing what your eyes are seeing without moving your head is really disconcerting. On top of this, moving around in the game when your body is actually sitting still is also a bit weird.

The most praised Oculus game has to be ‘I Expect You to Die’. In contrast to ‘Affected’ you remain stationary in the game, eliminating the possibility of feeling ill. In the game you are a secret agent in a tight spot and you need to figure out how to start the car and escape out the back of a plane without being blown up or suffocating. You use the mouse to pick up and use objects like knives and screwdrivers. This method is the best I’ve experienced so far and I have no doubt it will be emulated by other games. For the Oculus, remaining stationary in games is probably the way to go right now. Of course you can still look around you but keeping the in-game body as still as the real body is important if you don’t want to make the player sick. Games taking this into account will be most popular at first.

HTC, in partnership with legendary game makers Valve are a step ahead in my opinion when it comes to immersive gameplay. The Vive offers room-scale movement that overcomes the disconnect between head and body you can experience with the Rift. Using laser arrays your head and hands (the Vive comes with controllers) are tracked in real space.

Playing a game like ‘Job Simulator’ is entirely intuitive. You pick up mugs, open drawers, press buttons, fly paper planes just like you would in real life and this gives you a level of immersion that is truly unbelievable. In Job Simulator you’re transport to the year 2050 where AI runs the show and it tries to train you to do the jobs us humans currently do, as if we’ve forgotten how to work. It’s quirky and humorous and widely regarded as the best VR game to date.

Another game for the Vive that I really enjoyed is ‘Final Approach’. In this game you have a bird’s eye view of a tiny airport island. Flying around your head are tiny planes and helicopters that you’re tasked with landing safely by plotting flight paths to the runways. Sometimes planes get struck by lightning and catch fire. When this happens you need to get them to the ground pronto and then you can transport yourself to ground level to man a fire hose to douse the flames. It can get pretty intense. I can only imagine what real air traffic controllers go through.

The consumer version of the Rift will ship with ‘EVE: Valkyrie’ and the consumer version of the Vive will ship with ‘Job Simulator’ and ‘Fantastic Contraption’. These are the cutting edge of games right now but it’s important to note that none of them are fully-fledged, multi-level AAA titles. At this stage, they’re prototypes, just like the headsets I’ve been using. Everyone is in the trial and error phase right now so we can expect that games will only get better. One thing is for sure though, the next blockbuster title will be a VR game. 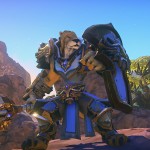