After canning its Nexus programme which invited other smartphone makers to build hardware for its Android platform, Google decided that it could do a much better job. The big G today unveiled the fruits of its labour in the form of the Google Pixel and Google Pixel XL smartphones.

These are the first two devices designed entirely by the Mountain View giant.

Think of these devices as the iPhone 7 and iPhone 7 Plus of the Googlesphere. It’s effectively Google’s first step into the ecosystem war; a war that Apple has practically dominated since 2007.

As Google can now control hardware and software, the company is at the forefront of its own platform’s development. With that though comes a certain degree of responsibility. And at least in terms of specifications, the Google Pixel family delivers.

Going with the 2016-esque metal unibody, the Pixel and Pixel XL look a lot like their smartphone contemporaries. In fact, they’re probably the ugliest smartphones produced this decade. Still, they pack a punch.

The more compact, cheaper and pocket-friendly Google Pixel boasts a 5.0-inch 1920×1080 AMOLED screen, powered by the new quad-core Qualcomm Snapdragon 821. With it comes 4GB of RAM and a choice between a 32GB or 128GB storage bank.

Google also has a lot to say about the camera.

“It has the highest rated smartphone camera. Ever,” the company triumphantly states on the devices’ home page.

As for the hardware behind these claims, there’s a Sony-made 12.3MP sensor with an f/2.0 aperture alongside both a phase-detection and laser autofocus system. This should ensure that subjects are snapped in as crisp a manner as possible.

The Google Pixel has the “highest rated” camera fitted to a smartphone, claims Google and camera reviewers DxOMark

Up front, there’s another Sony-made 8MP sensor with a wider f/2.4 aperture and fixed focus lens.

Finally, the Google Pixel is rounded off by a now-standard USB Typc-C port, a fingerprint reader at its rear, and a 2770mAh battery.

The Google Pixel XL is different only in size. At 5.5-inches, the screen also boasts a 2560×1440 AMOLED screen. The larger body also allows for a bigger battery at 3450mAh.

But Google’s phones aren’t all about the hardware.

As a software-first company, Google Android is firmly in the spotlight. The Pixels will be among the first devices to debut with Android Nougat, and will see Google Assistant — Mountain View’s answer to Siri and Alexa — baked-into the Android experience. Assistant is currently only available on Google’s chat app Allo.

As for pricing, this is where Apple and Google’s tussle truly begins.

At US$649 for the 32GB Google Pixel, jumping up to US$749 for the 128GB model, the smartphones are priced remarkably competitively.

There’s currently no word on whether South Africa will receive its first Google-branded devices in an official capacity, but expect the phones to hit retailers in the US, Canada, UK and Australia by 20 October. 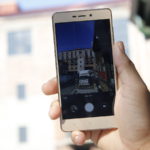