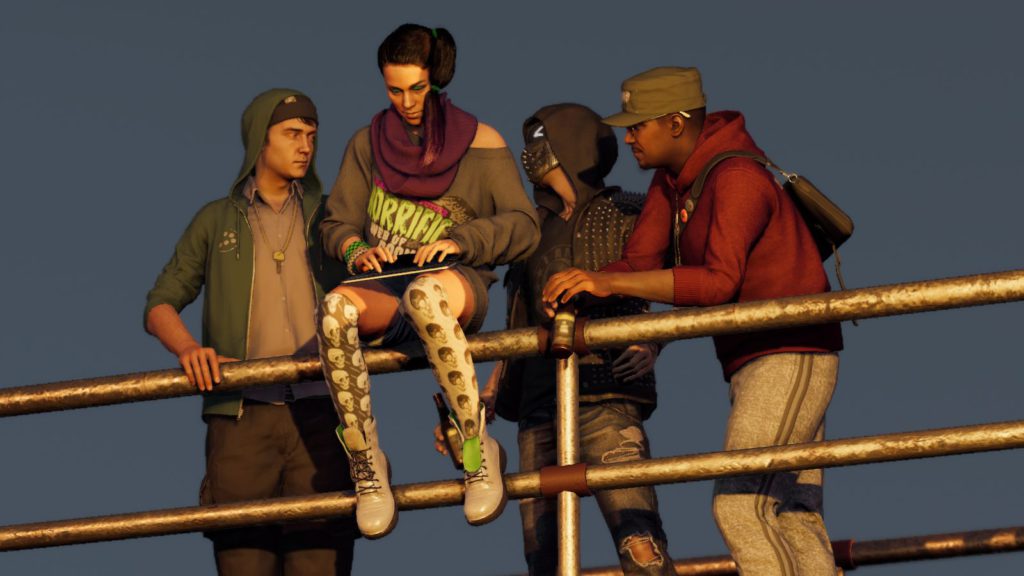 Gone are the days of the cold and sombre tone of Aiden Pearce’s Watch Dogs.

Ubisoft’s latest iteration of the franchise, Watch Dogs 2 is more colourful, in tune with its Millenial appeal and improves a number of facets of the original game. This includes driving machanics, the addition of fast travel, and different ways to play.

In Watch Dogs 2, you play as Marcus Holloway, a young talented hacker who is tasked with bringing down San Francisco’s intrusive surveillance systems. This after the baddies ctOS framed him as the lead suspect of a crime.

The open world map of San Francisco is beautiful with a better draw distance than most games out today. The map feels full and that’s something that the first Watchdogs missed.  The vibrant colours and nightlife of the city are incredibly alluring, I spent most of my time wondering around aimlessly and doing side quests just to see the city, something I haven’t really been interested in doing in many other games. The community of NPCs are living elements in the game and your interaction isn’t just limited to you hacking them or robbing them. It feels good to compliment a beautiful NPC or flipping off that asshole who runs into you.

Along with moving through the city, Watch Dogs 2’s soundtrack is pretty good, as well as the various ways to listen to said music. For one, if you’re roaming the city by foot you can purchase the music app on your phone and proceed to scroll through various tracks you wish to listen to. What’s more is that finding new tracks has become more of a joy than a pain that it was in the previous offering.

The colourful, over-saturated world of Watch Dogs 2 is a stark departure from the first’s melodrama

The radio stations also play a variety of awesome tracks which set a great mood when travelling or tackling missions. One of my major gripes with this game, however, is how difficult it is to change a song while driving. You have to hold down the touchpad on the control and then use the right analogue stick to change radio stations.

The gameplay can be clunky when traversing over or through obstacles, but it doesn’t detract too much from the game. Enemy NPC’s are a lot smarter as well, along with the sometimes over-powered NPC warning system. If one enemy NPC sees you there’s a good chance that every other will too — even if they aren’t in your line of sight.

Both police and ctOS securities are quite capable of dispatching you if you aren’t careful. This makes stealth gameplay that much more essential, also because combat in this game isn’t satisfying at all. And the game pretty much begs you to play stealthily — for instance, you start the game off with a stun gun. If that doesn’t scream non-lethal play then I don’t know what does.

This is immediately contradicted when you get to craft lethal weapons using a custom 3D printer.

Watch Dogs 2‘s hacking system has also been tweaked, making it easier for you to infiltrate surrounding terminals or peoples’ digital belongings.

The game now beckons you to use drones and tiny remote controlled rovers to access places you couldn’t normally reach. Using the drone to scout enemies or the rover to taunt them can be really satisfying. But, like many good things you’ve got to take them with the bad. The new hacking levels do require you to move around a given level more, hacking or tweaking various elements in a larger system. Sure, that’s annoying, but does provide a valid challenge and alternative to point-click-done gameplay.