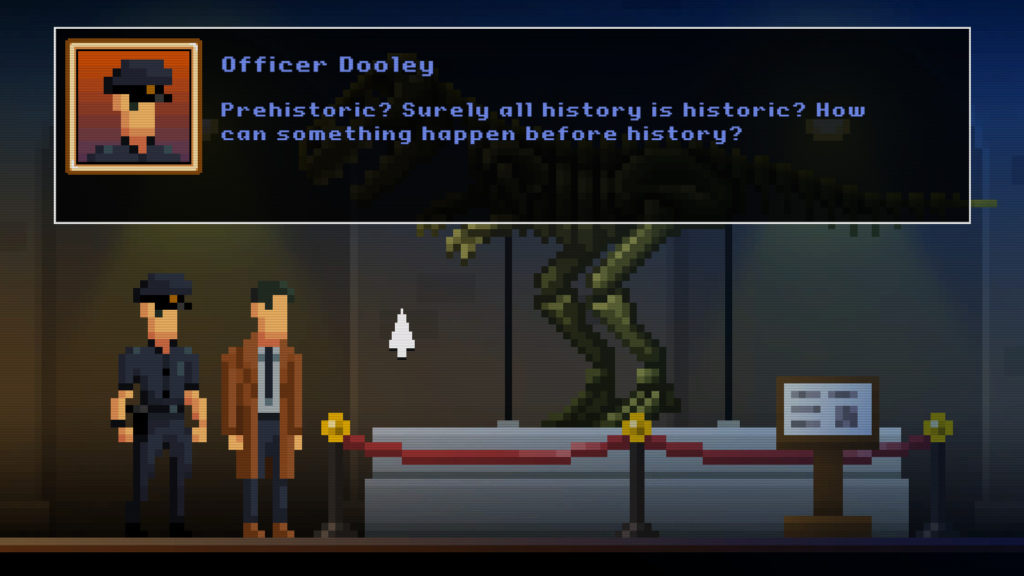 Darkside Detective is a point-and-click adventure game developed by the Ireland-based five-man indie studio, Spooky Doorway. Although it is the first title to come from the new indie studio, the team boasts an impressive collective experience, sporting the likes of artist Paul Conway, who worked on franchises such as The Sims and composer Ben Prunty, best known for his work on FTL: Faster Than Light.

Darkside Detective follows the adventures of the sharp-witted Detective Francis McQueen and his partner, the utterly clueless but equally loveable Officer Dooley. They are the only two members of the heavily under-funded and under-appreciated Twin Falls paranormal investigation team, officially known as the “Darkside Division”.

We experience this misfit duo’s adventures through a series of six short episodes, each presented as a case file. From the mysterious disappearance of a little girl to the melding-together of the material and spirit realms, Darkside Detective will provide you with a string of enigmatic and entertaining cases to solve.

I thoroughly enjoyed and appreciated the game’s episodic approach. As much as I love adventure games, it can be quite overwhelming to keep track of their usually-vast narratives and often colossal inventory systems. With Darkside Detective‘s episodic approach, you’re provided with easily digestible snack-sized portions of gameplay, packed with all the flavours we love about adventure titles.

For me, this also led to a much richer experience. Each case boasts its own unique adventure and cast of distinctively vibrant characters, which goes a long way to keep things fresh and interesting. The game is also fraught with on-the-nose nods to cult classics such Twin Peaks and X-Files, with a plethora of hidden references to pop culture thrown in as well. You never get the chance to be bored as you are constantly being introduced to new things. 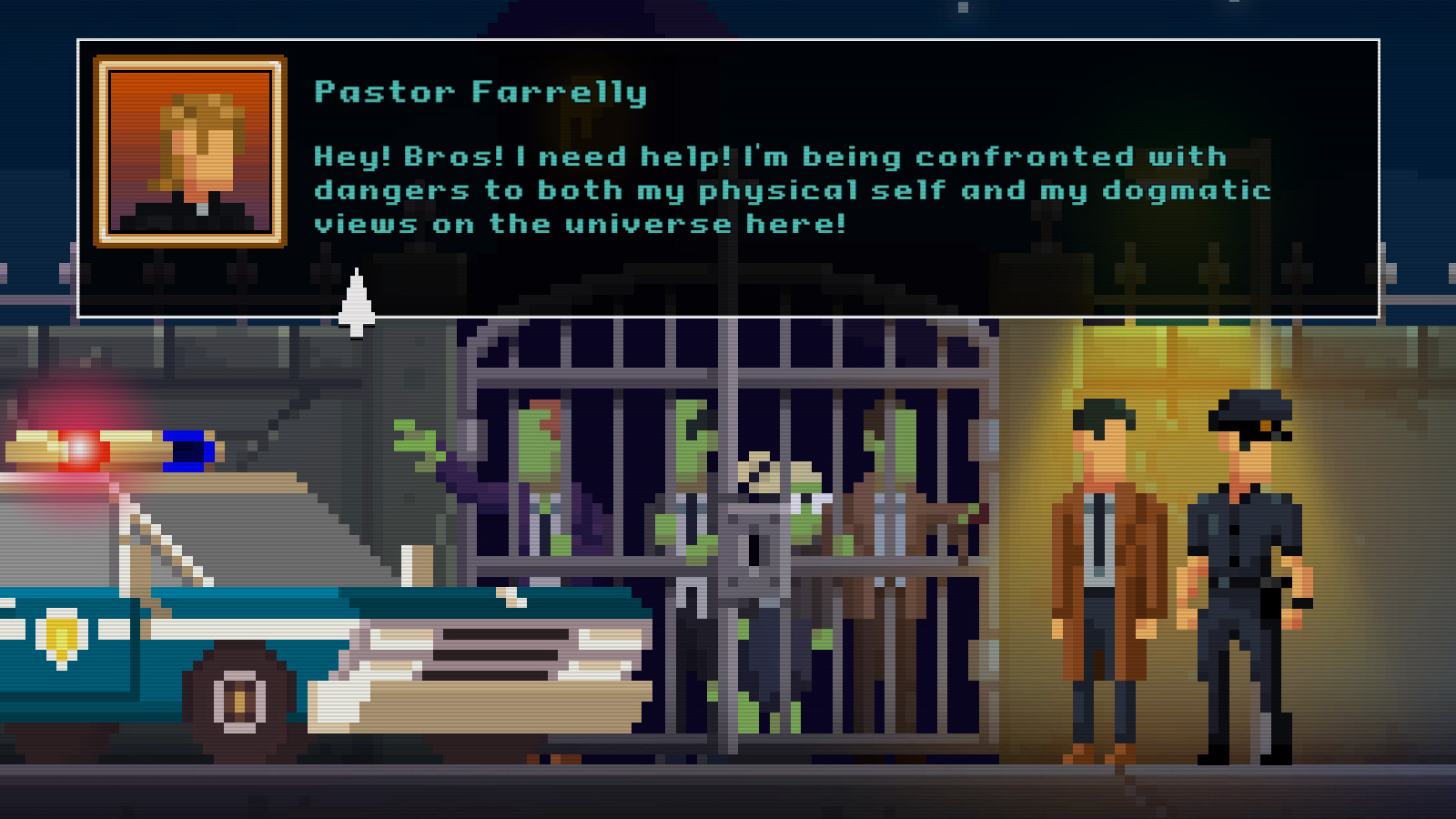 But of everything Darkside Detective has to offer, nothing kept me playing more than Officer Dooley. His ignorance is truly my bliss. Never have I witnessed someone so clueless and undedicated to their duties. Dooley is honestly one of best written characters I’ve encountered in a long time, regardless of medium. I’ve seen film performances with less personality than this pixel art officer that talks in text.

His blatantly careless attitude perfectly complements Detective McQueen’s steely demeanour. They are exact opposites that balance each other out, creating a bond that is an utter pleasure to see in action. The addition of Dooley also breaks the mould of the typically monologue-driven adventure game. You’re no longer mumbling to yourself but rather experiencing an adventure and
environments with a buddy by your side.

In terms of gameplay, Darkside Detective plays a lot like a simplified version of your typical old school point-and-click adventure games. You pick up various objects, sometimes needing to combine them, and then use these objects to solve puzzles or perform actions. Where it differs is the fact that you never have more than, say, five items in your inventory.

From entertaining puzzles to fantastic main characters, Darkside Detective has a lot to offer

For the most part, the puzzles aren’t too difficult, which is one area where I can imagine hardcore adventure gamers might find the game a bit lacking. But that certainly doesn’t mean it is without its share of challenging brainteasers. Another trait Darkside Detective shares with its point-and-click brethren is its share of entertainingly bizarre and nonsensical puzzle logic (which I won’t spoil with an example here).

There were a few occasions in my playthrough where Darkside Detective had me stumped, leaving me hopelessly clicking and re-clicking every object I can see to find some clue as to what the hell I’m supposed to do next. At one point, I have to admit that I even had to consult the oracle of Google to discover my solution. But as absurd as these puzzles may seem, once you’ve grown accustomed to their logic, you’ll be surprised at how intuitive they start to become.

Every so often you will also be introduced to various mini-games, such as using a selection of bones to pick a lock or rearranging a pair of esoteric symbols to complete a ritual. These mini-games also never share the same gameplay mechanics, providing yet another entertaining detour from the core gameplay. 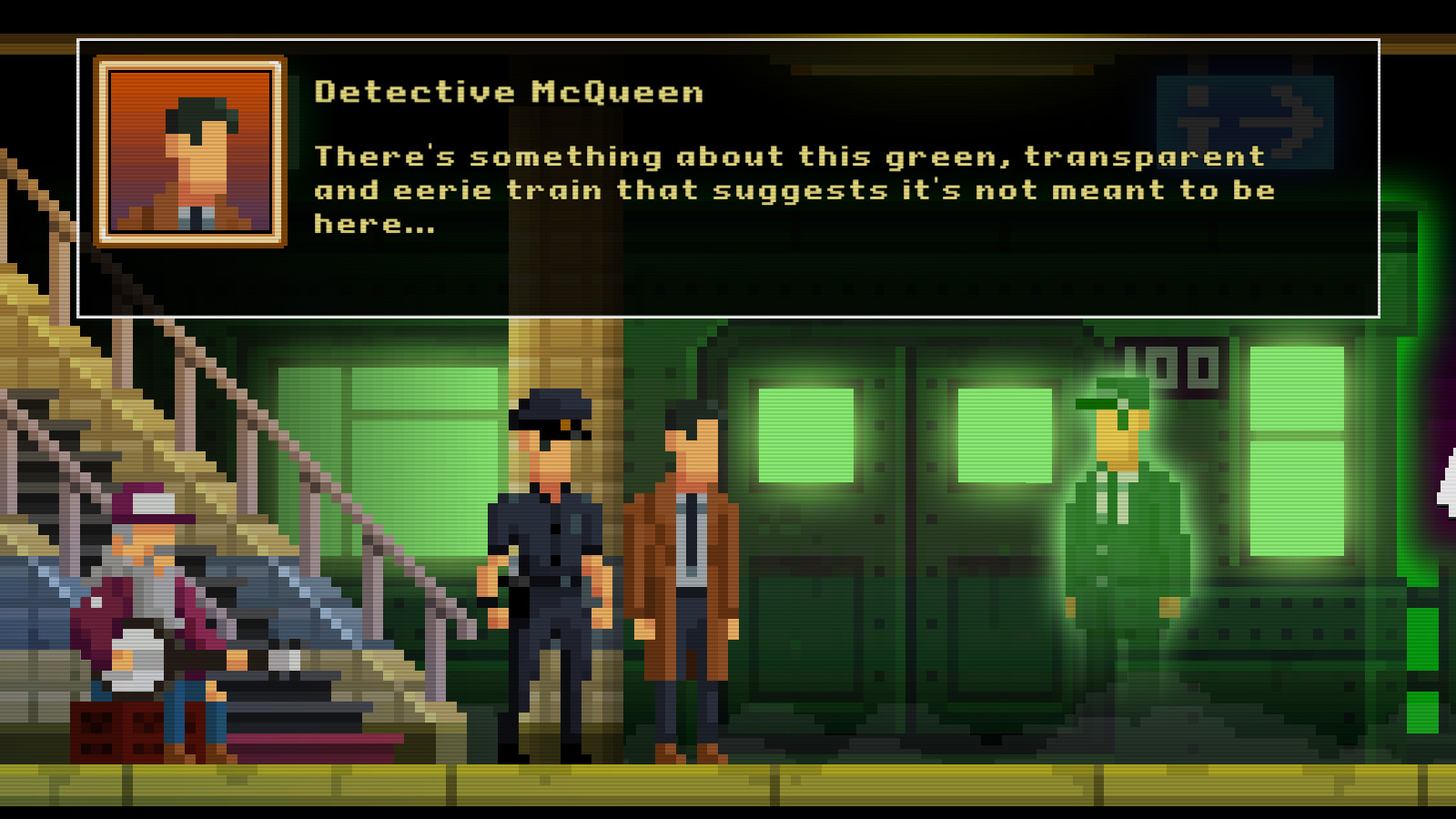 Few games can claim to have a personality but you can certainly count Darkside Detective among them. For all its pop culture references and similarities to other titles that will undoubtedly be drawn, it is its own creature.

There is very little I can find wrong with Darkside Detective, and it’s certainly not due to a lack of trying. From its superbly witty dialogue to its challenging puzzles and mini-games, it provides everything you could want in a point-and-click adventure game, with a whole lot of bizarre to spare. It’s clear that tons of passion went into its creation, with each team member providing us with shining examples of their craft.

Verdict: I hope we get to see more cases in the future. I for one wouldn’t mind if they kept adding to McQueen and Dooley’s adventures until the end of time. Darkside Detective isn’t only one of my favourite games of the year, but one of the most enjoyable and memorable gaming experiences I’ve had to date. 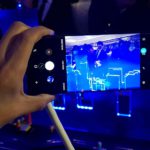