Earlier this year, we got confirmation that LG will be launching an upgraded V30 smartphone at MWC 2018. Now, on day zero of the expo, the company has revealed the LG V30s ThinQ.

We already got some of the details, including the AI-powered camera stuff, but LG has laid out all the specs now.

The firm revealed that the device will still have the same Snapdragon 835 processor as last year’s model, but packs 6GB of RAM and 128GB or 256GB of storage. So those hoping for a huge power boost due to new silicon will be disappointed.

As per its early news release, LG’s Vision AI platform will deliver Huawei-style smart shooting modes (using AI to determine the best shooting mode), as well as QR code scanning and the like. The firm also reiterated that it will use AI trickery to boost low light shots “by a factor of two”.

The LG V30s ThinQ hasn’t received a launch date yet. 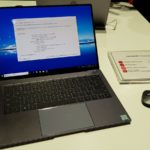