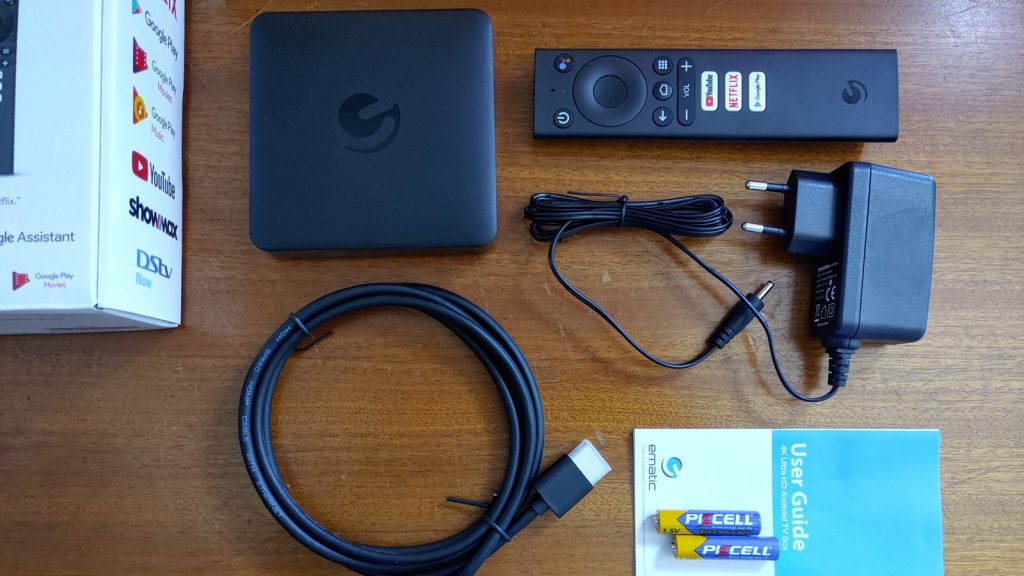 Shopping for Android TV boxes can be a painful task, even more so than smartphones. While most boxes in South Africa make similar promises of streaming bliss, very few deliver the actual experience.

What’s this experience, you ask? For one, seamless integration with some of the biggest streaming apps, Google certification, and the ability to play content cast from an Android phone.

Thankfully, alongside the likes of the Xiaomi Mi Box S, we can add another box to the country that delivers on these.

Built by Ematic, the 4K Android TV box retails for around R1200. On a good day you can get it for under a grand, but either way, it’s worth the price.

What’s in the box

First thing’s first, then. What’s in the box?

Alongside the Android TV box, you’ll find an HDMI cable, a two-pronged power cable with a barrel end, and a TV remote.

It won’t win any art competitions nor does it include any RGB, but utility is greater than aesthetics in the case of streaming boxes. To that end, the Ematic offers users practicality in spades.

With its plastic square design, it’s small enough to fit in a pocket, lighter than a budget smartphone but about twice as thick.

This makes it great for throwing into a bag. It also gives users a number of mounting options, too. You’d have no problem securing it to the back of a TV with some double-sided tape or Velcro. 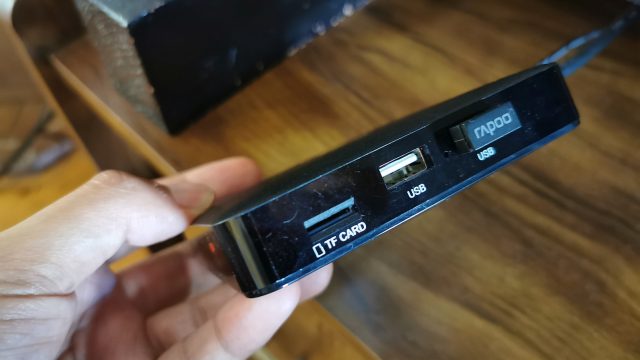 One potential gripe is the length of the power cable. If your TV is mounted on a monitor arm on the wall, while your power plug is at floor level, you’ll find it difficult plugging in the TV box. It’ll reach if your TV is resting on a cabinet that’s about waist high, but will be a stretch on anything taller.

At least the HDMI cable is of decent length.

The Ematic 4K Android TV box’s internals is nothing to really write home about. It’s powered by the Amlogic S905X chipset, which features four ARM Cortex-A5 cores at up to 1.5GHz.

That’s enough to push out 4K video with relative ease alongside the ARM Mali-450 GPU, a five-core chip that is clocked up to 750MHz.

Accompanying this is 2GB of DDR3 RAM and just 8GB of eMMC storage. It’s not lightning fast, and it’s about the lowest amount of storage you’ll find on a TV box in 2020, but it’s adequate.

I’ve about 10 audio and music streaming apps and VLC installed, and still have space for one or two games if need be. You can also install a microSD card if you want quick storage, or plug in a hard drive. You can also sideload apps if need be via a USB stick.

Speaking of I/O: you get a microSD card slot and two USB 2.0 ports on the right-hand side of the box, a single HDMI 2.0a port, a 10/100Mbps RJ45 Ethernet port, a 3.5 mm audio jack, and a SPDIF jack at the rear. The power port is also at the back, while the front and left of the box are free of ports.

I would’ve loved to see at least one USB 3.0 port, and perhaps even a USB-C port included.

Comprised of ten buttons and powered by two AAA batteries, the Ematic’s remote is fairly simple.

It fits in the hand really well thanks to a generously curved back, but that also makes it a horror to place or use on a flat surface. It’ll wobble when pressing buttons, or swirl around when you place it on a table.

Where it shines though is its options. Without being too cluttered, the remote features a back button, home button, and menu button on its primary row. Above that is a directional pad disguised as a control wheel. A select button is in its centre.

The latter’s placement is perfect though and your thumb tends to rest perfectly within the little concave select button.

In the top right corner, there’s an Android Assistant button, which lets you voice search on practically any screen and from within any app. The microphone sits just above the LED light at the remote’s top section.

It’s an excellent addition to the remote, and one that’s definitely needed. There’s no keyboard, which means either typing on the screen keyboard using the directional pad and the enter key, or connecting an external keyboard.

The latter will make more sense for some, but you can also get away with it by using your smartphone to find content and cast it to the box itself. This works flawlessly.

There are also dedicated buttons for YouTube, Netflix and the Google Play Store, which transport you directly into these apps from whichever you were in at the tap of a button. It’s great if you frequent YouTube and Netflix, but I would’ve loved to see a programmable button as well.

Finally, the volume rocker is below the home button row.

Overall, I had little issues with the remote bar the lack of a keyboard. Buttons feel good to click, but the printed surfaces will wear over time — especially on the home button — so keep this in mind.

I would recommend getting a small media keyboard if you’re looking to do some serious analog searching on this device.

Finally, we get to the best part of the Ematic Android TV, the software experience.

The box runs on Google-certified Android TV 9.0, the latest version of the OS optimised for large screens. It works extremely well.

Some would argue that it just isn’t as feature rich as the likes of Apple TV and other aftermarket Android TV skins, but I find it provides the user with just enough customisation and easy access to services.

As it’s Google-certified, Showmax, Netflix, and DStv Now works out the box. You can also update these apps as well, something you can’t always do on some Android boxes.

The Google Play Store also gives you access to other streaming services, like Twitch or Spotify, but you can also always side-load the apps you really want on this device too.

Unfortunately, Apple Music just isn’t available on the Android TV, so for these apps we’d recommend simply casting audio or video to the box. 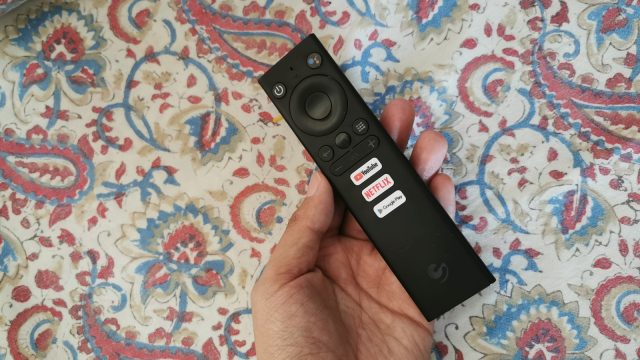 As I mentioned earlier, this works an absolute treat. You, and your family, can cast video to the device provided you’re connected to the same WiFi network. And it’s really as easy as opening the app on your phone, and tapping the casting button. It’s excellent, really.

I also gave VLC a go and can confirm the box can play video, music and other content via your home network without any issues. It can also play 4K content from a hard drive with ease too.

I would, however, recommend you install a wired network connection to the box. WiFi has a habit of dropping out after resuming from standby. This isn’t an issue with the primary WiFi connection in my house either. I gave it a go on three different networks, and all had issues resuming the connection at times.

To this end, you might want to use that Ethernet port at the back, but for some, this just won’t be an option.

Overall, I’d rate the Ematic Android TV box highly, especially if you’re looking for a seamless streaming experience. There are more powerful boxes out there, and the device is lacking some features others have.

The remote can be a pain, and typing is an absolute chore, but these can be solved relatively simply.

It’s annoying WiFi issues at startup can also be mitigated by a wired connection, but again, not everyone can run metres of cables around their dwellings.

Additionally, if you want to game on an Android TV, invest in something with a little more RAM, internal storage and a faster chipset. The Ematic Android TV box wasn’t really designed for all that.

In closing, if you want a stress-free streaming box that just plays media with minimal setup, you can’t really go wrong with the Ematic Android TV box. Just keep a wireless keyboard on hand, okay? 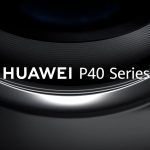