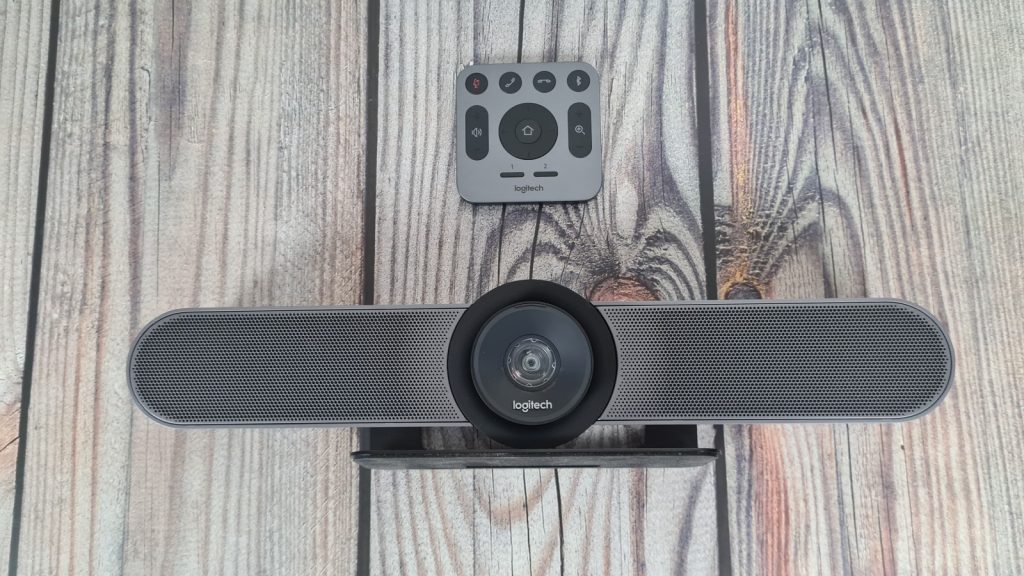 While the Logitech MeetUp has existed for some time, the pandemic and the rise of permanent hybrid or remote working setups has given the all-in-one conference camera its time to really shine.

Designed for small conference rooms and huddle rooms, the system simplifies video conferencing with a setup that delivers high quality and exceptional user-friendliness, making it a great solution for teams that regularly need to make a good impression on camera.

What to know about the Logitech MeetUp

The Logitech MeetUp is an all-on-one camera setup, meaning it has a built-in camera, microphone, and speaker system.

Besides the display and computer system you’re connecting it to, you don’t need additional hardware.

The MeetUp includes a 4K Ultra HD Camera with five times zoom functionality. The camera lens, which features a 120-degree field of view, is also able to pan and tilt, focusing on subjects in view.

To control the device, you get a remote. This remote includes buttons that allow you to mute the microphone, zoom, increase volume, answer and end calls, and control the lens angle. 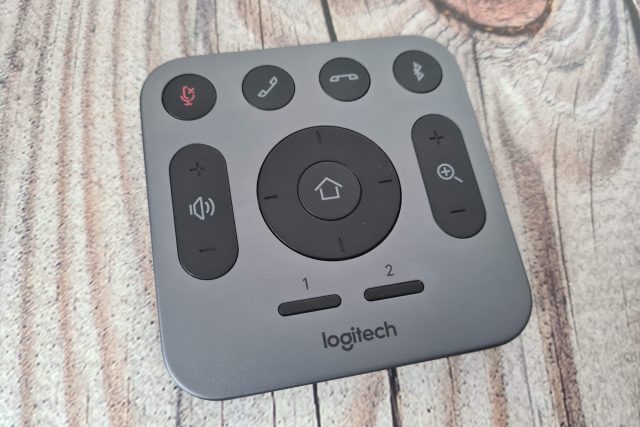 You can also buy additional accessories, such as an expansion microphone.

But the built-in microphone, with three beamforming elements, has a pickup range of four metres. So you would only need the additional accessory for larger rooms.

In the box, you get a five-metre USB 2.0 cable and power supply, as well as wall mounting hardware if you choose to connect the MeetUp to a wall-mounted display.

Otherwise, it has a built-in stand that you can use to place the camera on top of a table surface.

It has plug-and-play USB functionality and is compatible with all major video calling software, including Skype for Business, Microsoft Teams, Zoom, and Google Meet.

When first setting up the device, what immediately stands out is how simple it is to set up and use. It connected seamlessly with our computer, and we installed the Logitech Sync app to give us access to the simple settings for the camera.

The most trouble we had was finding a place for the camera considering the small desk setup we were testing it on. But using the device was extremely easy.

The long cable also gives you great manoeuvrability when it comes to positioning the camera, giving you options for more flexible setups.

When it came to its performance, the device also delivered exceptional quality. The only hiccup experienced was due to Skype (the consumer version) distorting some colours in the video, likely due to issues with compressing the image.

However, these issues weren’t experienced in Google Meet or other meeting software with fewer compression or stream quality issues.

The audio quality was also great. The built-in noise and echo cancellation meant that even though the device delivers clear, loud audio through the speakers, the microphone didn’t pick up any echoing.

The kind of issues I expected to encounter in an all-in-one solution didn’t seem to appear during calls.

Meanwhile, the microphone was also able to easily pick up my voice in different positions around the room — even when I was in a passage outside the room at one point.

I can't get over how cool the panning and tilting feature of the Logitech MeetUp camera is. pic.twitter.com/taH2mxFBru

Besides the colour distortion in the consumer version of Skype, video quality on the device was flawless. While most video calling platforms will compress the video feed, the Ultra HD image sensor comes with other benefits.

Firstly, there’s the ability to zoom. This means that even if you’re not using the wide-angle view and you’re participating in the call solo, you can zoom in without sacrificing quality or appearing pixelated.

It also gives you more freedom when it comes to call participant placement around the room. You don’t have to be right in front of the camera — you can be seated some way away.

The great lens and software also means it performs extremely well even in low light settings. This means you don’t have to worry about setting up additional lighting during calls.

Even in a dimly lit room on a cloudy day or during late afternoon, the camera delivers a clear, bright image. Logitech calls this the camera’s RightLight technology.

Finally, one of the best features of the camera is its RightSight technology, which provides automated camera control.

This tech automatically moves the lens and adjusts the zoom to get all participants in view. If a new person takes a seat in the meeting, for example, the camera tilts and pans to include them in the view too.

This just adds to the ease-of-use factor.

For the age of hybrid work, the Logitech MeetUp is a great all-in-one device.

In fact, its features are so impressive and simple to use, people who don’t mind splurging on the price tag might be tempted to purchase one if they frequently hold family video calls.

However, the price makes it best suited for businesses rather than consumers. While distributors and retailers all set different price points for the device, you’re looking at between R15 000 and R24 000 based on the listings we’ve seen online.

On the lower end of the price range, the device is definitely value for money for small businesses that are looking for a team conferencing solution. 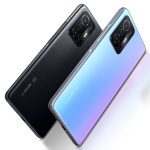