“The Muscles from Brussels,â€ Jean-Claude Van Damme recently starred in a YouTube advertisement for Volvo Trucks. In doing so, he made Volvo the coolest manufacturer of heavy commercial vehicles in the World.

The video, viewable below, sees Jean-Cleaude Van Damme (JCVD) standing on the mirrors of two Volvo FM trucks, reversing down a runway. As the dialogue unfolds, the trucks move apart and JCVD keeps his feet planted on the mirrors until he is in a full split between the two moving trucks. Accompanied by a rather interesting soundtrack from Enya, the final spectacle is rather special to watching, giving trucking a cool edge.

What is the technology that allows this to happen? The video mentions the â€˜Stability and Precision of Volvo Dynamic Steering.â€™ A look on the Volvo website shows them this technology is available on the Volvo FM, FMX and FH models. But how exactly does it work?

Volvo Dynamic Steering links the steering wheel to an electric motor which drives the hydraulic steering system. According to Volvo, the benefits include:

As the drivers moved their vehicles down the runway, the Volvo Dynamic Steering system maintained a set speed in each truck while an electric motoring made 2000 adjustments per second to ensure precision steering with minimal effort from the drivers.

Jan-Inge Svensson, the engineer behinds the system software at Volvo Trucks said, â€œThe stability and control are so good that you can reverse a truck over a long distance with very high precision, which is exactly what weâ€™ve had to do in this film. It had to be perfect — right down to the last centimetre.â€

How does this help JCVD to achieve his remarkable split between the trucks? Simply put, while the trucks drive, in reverse, down the runway the computer will monitor the position of the front wheels and keep truck and trailer heading perfectly straight and at the exact same speed. When ready to move apart, one of the drivers needs to slightly turn his steering wheel until JCVD is in full split, straighten the wheel and Dynamic Steering returned the truck to a straight and true path.

At the time of writing the video had been viewed 29-million times in the 7 days since it went live. That’s more views than most car companies can ever dream of and this is for a truck commercial. Well played Volvo. 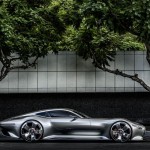