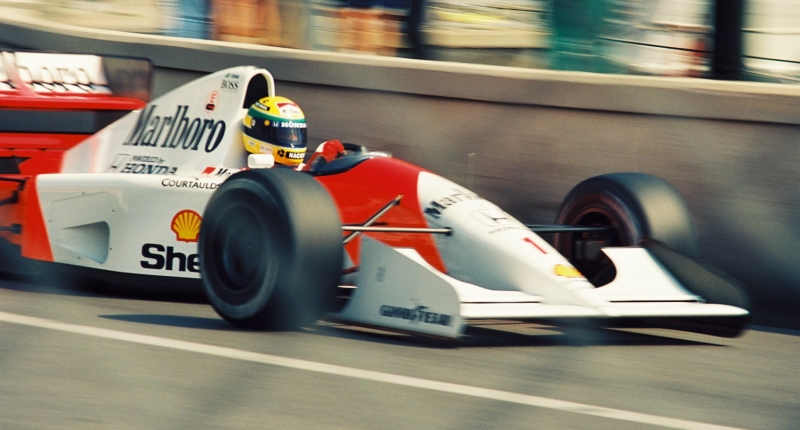 Where there are great racing cars, like the McLaren MP4/4, there are usually great racing drivers sitting in the driver’s seat. There were few greater in the modern era than Ayrton Senna. The late Brazilian is idolised in motorsport folklore and canonised in his homeland, lauded for his phenomenal talent, humble persona, ruthless determination and sheer desire to win. He won 41 races from 161 starts, taking 65 pole positions and earning three World Drivers’ Championships.

The San Marino GP, 20 years ago, marks the weekend that would change Formula 1 forever — for the better and the worse. While leading the race, Senna lost control of his Williams FW16 car on lap seven, crashing into the concrete barrier surrounding the Tamburello curve. He succumbed to his injuries a few hours later, joining Roland Ratzenberger, the Austrian driver who was killed earlier that weekend.

Senna remains the last driver to die at a Formula 1 event, thanks to improved safety measures, in both track layout and car design after and because of his death. But he leaves another legacy. His ten seasons as a Formula 1 driver gave motorsport fans some wonderful memories in some of Formula 1’s greatest cars, and his competitors more than a few headaches. These are the real reasons fans remember him.

But this wasn’t just a hat-trick, it was a humiliation. Senna lapped the entire field bar Michele Alboreto in his Ferrari, a further 62 seconds back.

The performance would establish Senna as Formula 1’s new rain master and he would wear this crown proudly in future wet races. Senna finished fourth in the Drivers’ Championship in 1985, a respectable showing as he only finished 9 of the sixteen Grands Prix.

The 1988 season broke all kinds of records. The McLaren MP4/4 was an immaculate machine breaking the records for wins by a constructor in a season and the most 1/2 finishes recorded by a team in a season. As a result of the car’s dominance, Senna’s biggest rival was French legend Alain Prost in the sister car.

Although Senna was disqualified from this race, it was his ludicrously determined drive through the field that made it memorable.

As so often was the case in Senna’s career, his gearbox failed on the warm up lap, forcing the Brazilian to limp back to the pits stuck in first gear. Before the race began, Senna pitted for the spare car (a machine he had never driven before as it was set up for Prost) to start from the pit lane.

From the back of the grid, Senna passed five cars in the first lap. By lap 20, he was second behind Prost, in a field of 26 cars.

Unfortunately for the fans, the stewards decided to black flag Senna before he could challenge for the lead. Changing his car after the green flag was flown allegedly breached Formula 1 regulations, according to the race stewards.

Another comedy of gearbox errors turned this seemingly dull race into a brilliant spectacle. This was Senna’s first race win in Brazil, after seven barren seasons in his home country. It was also one of his luckiest.

Senna led the field from the start. His nearest challenger, Nigel Mansell in the Williams, had a terrible second stop that saw him drop to fourth. Mansell also later pitted to remedy a puncture, allowing Senna to scamper into the distance. But soon, Mansell was catching the Brazilian again, quickly followed by his Williams teammate, Ricardo Patrese. In a strange twist of fate, Senna’s McLaren started losing gears just as Mansell’s gearbox failed.

To balance Senna’s luck, rain began spitting mere laps before the race’s conclusion. Ricardo Patrese in the new chasing Williams, was rapidly closing the gap – until his gearbox began to struggle as well.

Senna’s car’s performance rapidly deteriorated in the final few laps, trudging around Interlagos stuck in sixth gear, unable to downshift. But somehow, he dragged a victory from seemingly nowhere, and won the race by just over 2 seconds. Due to the physical and mental stresses, he suffered from severe muscle spasms during the race. When he was eventually lifted from his car, he could barely lift his winner’s trophy.

The penultimate race of the 1989 season is now the most infamous Formula 1 race of all time. But beyond the controversy, it was memorable for one reason — Senna’s seven lap scramble. The video above describes the Prost/Senna rivalry.

Senna’s McLaren teammate, Alain Prost, would become World Champion if Senna failed to win the race. The two cars lined up first and second on the grid, but by the first corner, Prost had the lead. A relatively uneventful game of chess between the two would be played out, that is, until lap 46.

Senna found good drive out of 130R, the fastest corner on the track, and pulled alongside Prost before the low speed chicane. The Frenchman though, as he promised to do before the race began, closed the door, leaving Senna with no room on the inside. The two McLarens collided, damaging both cars.

Prost was out, but Senna, with a broken front wing, managed to restart his car, pit for a new wing and rejoin behind new leader Alessandro Nannini.

After the race, the stewards stripped Senna of his victory. His trip down the escape road after the collision was deemed illegal, and was later fined an additional US$100 000 after McLaren appealed the decision. Many fans still regard this race as the worst injustice motorsport has seen.

In the aftermath of Japan two weeks earlier, Adelaide’s weather was nothing short of atrocious. But conditions that would delay the start of a modern Formula 1 race, seemed to make Senna all the more determined.

Prost, favouring safety over valour, decided not to race, deliberately retiring after the first lap. Senna on the other hand, with the Championship technically still alive citing his Japanese disqualification court appeal, decided to race. And for good reason.

Unfortunately, his brilliant display came to an end when he ploughed unsighted into the back of Martin Brundle‘s Brabham while trying to lap him.

Critics arguing that his performance was no mean feat — as the McLaren was nearly a second a lap faster in the dry — should remember that Senna had mastered the rain in lesser machinery, at tougher circuits and with less experience.

There is no greater example of this than Senna’s first-season performance in a Toleman at a rain soaked Monte Carlo.

Perhaps the truest test of skill, nerve and concentration a driver could face is a dry Circuit de Monte Carlo. Brazilian legend Nelson Piquet famously remarked that driving around Monaco’s streets was like “trying to ride a bicycle in your living room.” Add water, and the task becomes nearly impossible.

Senna, in his first Formula 1 season, made this challenging circuit look very ordinary, when his competitors were trying their utmost not to crash. Yes, he did not win the race, but it was a sterling drive for a rookie.

Qualifying in thirteenth position, Senna finished in second behind none other than Alain Prost. He might have passed Prost but the race was stopped before he could legally do so – another race involving Prost and Senna filled with controversy.

Senna would go on to win around the streets of Monte Carlo a record 6 times.

The race begins about 3 minutes into the video.

Have a conversation with a Senna fan and this is the race they’ll almost always mention.

Senna often made the other drivers look very ordinary in the rain. Easter Sunday’s Grand Prix at Donington Park was utter testament to this. Constantly changing weather saw the drivers face a quick drying track before the race start, but faced splashes of intermittent rain throughout the race.

Starting in fourth position but falling to fifth after a terrible start, Senna passed his rivals one by one, almost corner by corner.

First was Austrian Karl Wendlinger in the Sauber, then Michael Schumacher in the Benetton, and lastly Alain Prost and Damon Hill in the two Williams cars. Senna went from fifth to first before the first lap was complete. In less than two minutes, he was leading a race no one thought he could win. His dominance was immense, especially since the 1993 McLaren was not the fastest car it had been in seasons’ prior.

Senna was able to find grip in the sopping conditions where there seemed none. Michael Andretti, for example, Senna’s teammate in the sister McLaren, spun off into the gravel before completing a lap.

When the checkered flag was flown 76 laps later, Senna had lapped the remainder of the field, bar Damon Hill in his Williams, nearly 85 seconds back. In a post race interview, Senna called his immaculate drive “a dream.”

This race was Ayrton Senna at his absolute best.

What’s your favourite Senna moment? Let us know in the comments section below. 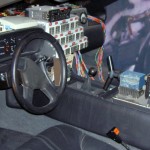