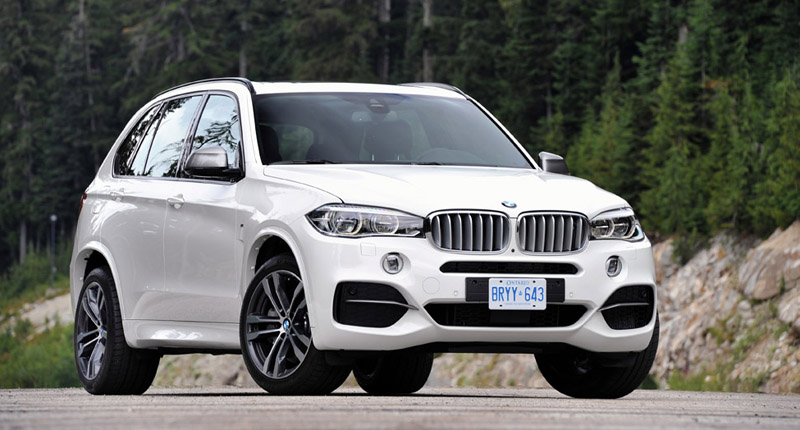 The BMW X5 arrived on the scene back in the late nineties as one of the first â€œcrossoverâ€ vehicles to coolly cast aside the primitive SUVâ€™s commercial roots and instead embrace on-road ability and passenger comfort.

Yes, despite the idyllic rural settings featured in this mid-size luxury vehicleâ€™s official press shots, the BMW X5 â€“ particularly the performance M50d model we tested â€“ is awkwardly out of place in The Wild and far more comfortable in a bustling city, in defiance of its considerable dimensions.

Of course, tarmac-biased SUVs have become exceptionally popular over the past few years, sassily elbowing their rugged body-on-frame counterparts far into the background. In fact, the soft-roaderâ€™s rise has been so prolific that the typical young urban family now favours it over the station-wagon and minivan.

But to dismiss the third-generation BMW X5 as a mere limp-wristed soft-roader would be an inordinate injustice. You see, this chunky SUV has evolved into something of a dynamic marvel â€“ and in M50d trim it boasts extra-special sports-car performance and enough gadgets to render a technophile positively giddy.

And, since weâ€™re all about the gadgets here at Motorburn, weâ€™ll start with the X5â€™s cutting-edge equipment, which is built mostly around the German brandâ€™s clever â€œConnectedDriveâ€ system. The X5 ships standard with a full-colour head-up display. Useful snippets â€“ such as current vehicle speed, speed limits and even collision warnings â€“ are projected onto the windscreen in front of the driver. Interestingly, telephone contact lists can now also be displayed. The presentation of this information is remarkably clear and easy-to-read, although when viewed through polarised lenses, it all but disappears.

Not standard, although arguably even more nifty, is BMWâ€™s night vision system. Prod a button to the right of the steering wheel and the iDrive-controlled 10.25-inch screen neatly integrated into the dashboard displays a black-and-white forward view via an infrared camera. People, animals and indeed any heat-radiating objects (I even picked out a few hot-headed passengers on the bus in front of me) are automatically highlighted. If the system reckons there is a risk of collision, it sends the driver a quick warning. Clever, although we noticed that heavy rain rendered the system virtually useless.

The BMW X5 is a bit of a beast â€“ measuring nearly 4.9m-long and close to 1.8m-wide â€“ so parking it in a cramped spot can be a bit daunting. Thankfully, it comes standard with front and rear parking sensors as well as a reversing camera. But the optional â€œsurround viewâ€ system is an even more useful addition, providing a 360-degree birdâ€™s eye-view of the vehicle and its surroundings on the display via a team of strategically placed cameras. Very smart indeed. Most of the X5â€™s most impressive gizmos serve to boost the vehicleâ€™s safety. In fact, along with the usual array of airbags and safety acronyms/abbreviations, the big Beemer boasts some seriously inspiring protection systems. One of those is the dynamic brake-lights function: under particularly hard braking, the tail-lights initially flash, before the hazards come on to warn trailing drivers.

Optional camera-based driver assistance packages, meanwhile, include lane departure warning, blind spot monitors and â€œperson warningâ€ (with a city braking function). Active cruise control â€“ which works via cameras and radar â€“ incorporates a â€œstop and goâ€ function that renders slow-moving traffic a breeze (and incidentally works up to speeds of, ahem, 210km/h). Thing is, the preferred following distance tends to present itself as a perfectly sized gap for impatient motoristsâ€¦

Not that one would be too bothered from inside the BMW X5â€™s plush cabin. The standard nine-speaker hi-fi system (with a DVD drive) is perfectly adequate, although a 1200W Bang & Olufsen high-end surround-sound option (with 16 loudspeakers) is also available, as is a rear-seat entertainment package incorporating twin 9.2-inch tablet-like screens. Internet preparation is also offered, facilitating the in-car use of Facebook and Twitter (while stationary, of course), while a dictation function with full speech recognition for emails, SMSes and memos is also available in certain markets. The BMW X5 M50d also benefits from a full navigation system with 3D map display and 20GB of storage space.

So, in terms of tech, the X5 is particularly well endowed. But what about under-bonnet oomph? Well, the M50d employs the kind of diesel engine thatâ€™d embarrass all but the hottest of hot hatches. Thanks to three turbochargers (and thus multi-stage charging), the 3.0-litre straight-six powerplant kicks out a not-to-be-sneezed-at 280kW. But, more importantly, it also generates a gargantuan 740Nm between 2000rpm and 3000rpm, ensuring terrific throttle response.

In fact, that fat slab of low-down grunt â€“ fed to all four wheels via a smooth eight-speed automatic gearbox â€“ translates into a zero to 100km/h sprint time of just 5.3 seconds. Not bad for something with a luggage capacity of 650 litres and weighing well over two tonnes. Switch it into its most extreme settings (bump the gear-lever to â€œSportâ€ and scroll the driving mode through to â€œSport+â€), and the BMW X5 M50d eagerly dishes up the type of relentless acceleration that one would expect from a nuclear-powered train. It is quick in a straight line, no two ways about it. Thing is, it can go around corners, too. The adaptive M suspension system, rear-biased all-wheel drive, and the meaty tyres on the 19-inch wheels combine to lend the M50d more dynamic ability than should be physically possible. It grips through the bends so well â€“ despite the somewhat soggy steering â€“ that it could plausibly be described as an oversized sports-car.

But itâ€™s also capable of plodding along in â€œEco Proâ€ mode â€“ rather comfortably, we might add â€“ taking tiny sips from the 85-litre fuel tank. In fact, BMW reckons itâ€™s good for a rock-bottom 6.7 litres per 100km on the combined cycle, although we ended up in the early double-digits thanks to our penchant for on-road haste. Can you blame us?

Verdict: The BMW X5 M50d combines the best elements of various types of vehicles. It boasts more passenger/load space than a large luxury sedan, itâ€™s quick enough to be classed as a performance vehicle, and it can even be frugal on fuel should the need arise. It can do the job of a soft-roader, and much, much more. Of course, the big X5 is also packed to the rafters with technology, even if the most enthralling bits are optional extras. Itâ€™s certainly not cheap and it doesnâ€™t look all that different from the second-gen model, but the BMW X5 M50d is an absolute marvel â€“ and that tremendous tri-turbo engine is at the heart of it all.