Almost all big auto brands are pushing the boundaries of self-driving cars. Honda, Ford, Audi, Toyota and tech giant Google are just a handful of key players vying to perfect the art of ultimate efficiency and pure laziness. Audi, however, seems to be ahead of the race following its most recent stunt.

Testing the spirits of the major car manufacturer’s motto of vorsprung durch technik, the RS7 vehicle went for a spin on the famous Hockenheim racing circuit outside of Frankfurt.

As we reported last week, the company wanted to break new records in the fields of precision and accuracy. Speed was the name of the game though and Audi managed to achieve its goal.

According to the BBC, the car took merely two minutes to break the record of 240km/h. And that’s not two minutes in a straight line, the Hockenheim track is over 4.5km long and, as many an F1 driver will attest, contains plenty of challenging twists and bends.

The RS7 used a combination of cameras, laser scanners, GPS location data, radio transmissions and radar sensors to guide itself around the track, with the data processed by computing equipment that filled its boot. Apart from the additional a turbocharged 560-hp TFSI engine and a couple of other incredible machinery, of course. But still; no human involved at all.

On its site, Audi writes that, “It’s an evolution that has the potential to revolutionise the experience of driving a car.” It adds that if it is up to Audiâ€™s engineers, the feeling of freedom and the fun of sporty driving will be maintained — because there is a choice. And because it’s just super fun. 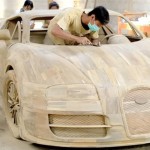