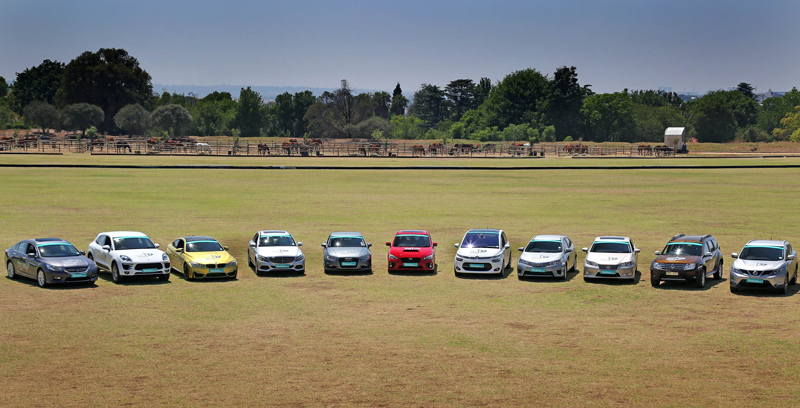 The WesBank/South African Guild of Motoring Journalists Car of the Year 2015 winner announcement will take place next Wednesday, 18 March. Ahead of this, Iâ€™ve taken a look at the finalists and asked some other journalists for their thoughts on this year’s line-up.

A key point that has been lost in recent years between journalists, the public, and jurors is just what the competition is rewarding.

According to the competition administrators, the winning car must: 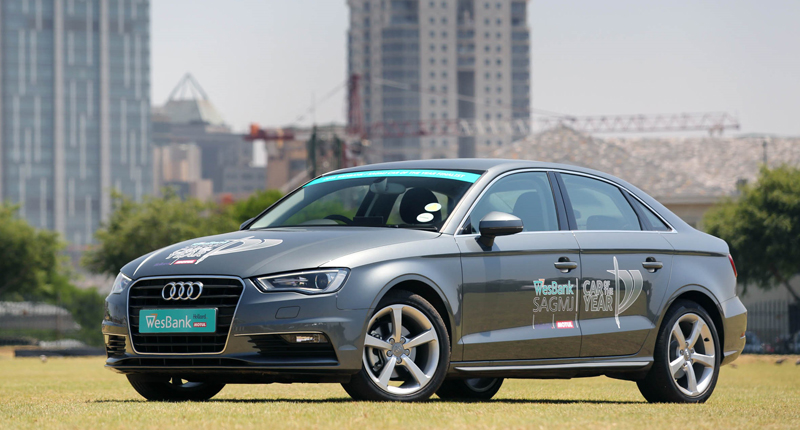 The One Iâ€™d Buy

The Audi A3 sedan rivals the Mercedes-Benz CLA but, where the CLA is an overpriced, cramped, ugly and awkward vehicle, the A3 appears to be the best car Audi currently build.

As with all Audis, the build quality is first-rate. The quality of the materials used as well as the fit & finish of the components makes far more expensive vehicles look cheap and tacky. The A3 sedan is also the right size for a vehicle. Nicely proportioned, it feels neither too big or too small when driving along.

The A3 sedan now occupies the space once held by the E46 BMW 3 Series, a car that won Car of the Year back in 2001. Is the A3 a step forward over the BMW? It may be better built but thatâ€™s about all it has achieved. Of the finalists, the A3 sedan is the one I would most likely buy, but Iâ€™m not sure itâ€™s Car of the Year. 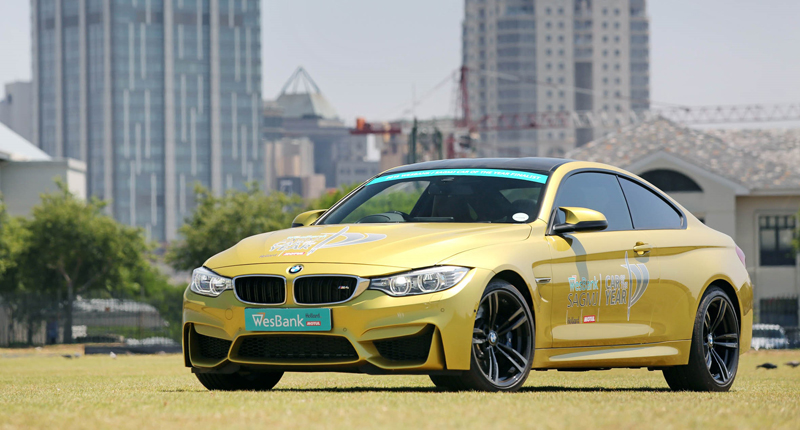 The BMW is the fastest and most performance focused vehicle here. Is it a significant improvement over the V8 M3 though? Iâ€™m not sure. It is truly incredible, but I donâ€™t think it makes a significant leap forward compared to previous models in its market. 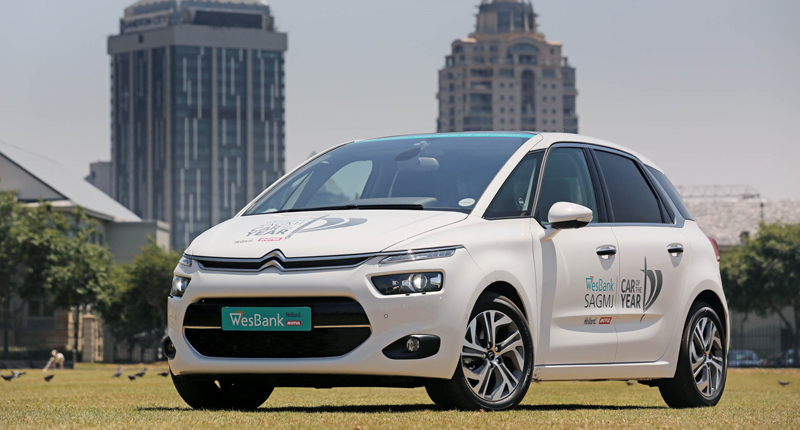 The idea of an MPV is an attractive one: The running costs and exterior dimensions of a hatchback with the space of an SUV. However, MPVs have received a somewhat poor reputation in the past as being dull, slow, not very nice to drive and over priced. The Citroen C4 Picasso is a good-looking MPV, with lots of space and clever storage spaces and seating configurations. It appears to be well-built and has a number of clever features such as automatic parallel parking & alley docking, 12-inch colour display screen and an 8-inch tablet control system. It sounds like a winner, with all the MPV issues fixed. However the engine-gearbox combination lets it down. The 1.6 turbo-diesel has a number of flat spots, resulting in the power arriving in lumps. The gearbox is also rather heavy, a poor showing for a city car.

The C4 Picasso might surprise everyone with its great package, but, that powertrain does let it down.

Honda Accord 3.5 V6 Exclusive (Past Winner) 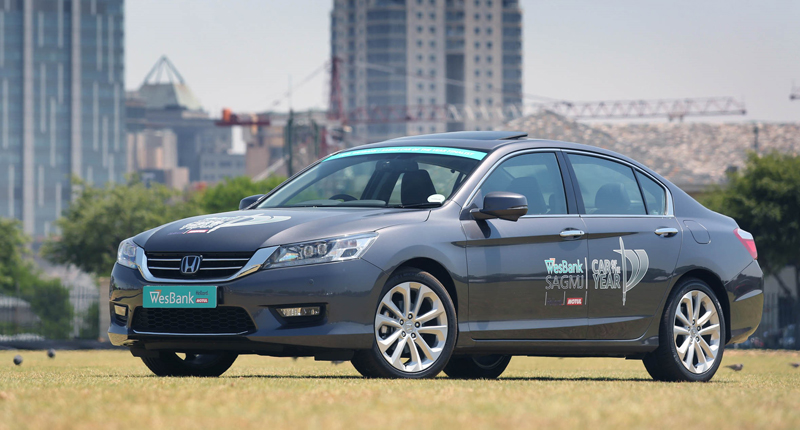 The Honda Accord has always been loved by South African petrol heads, motoring journalists and, most importantly, by the people who bought them. Last year Honda announced that the European Accord would no longer be available. This meant the models arriving in South Africa would originate from the American market. A price hike and some of the most forgettable styling of any vehicle on sale today meant the Accord had become its nemesis: It had become a Toyota Avensis.

I canâ€™t say much more about the Accord. It’s well-built, well equipped and, being a Honda, will be the most reliable vehicle youâ€™ll ever own. What you should know is the Honda Accord 3.5 V6 costs R576 300 or just R25 000 less than a BMW 5 Series. 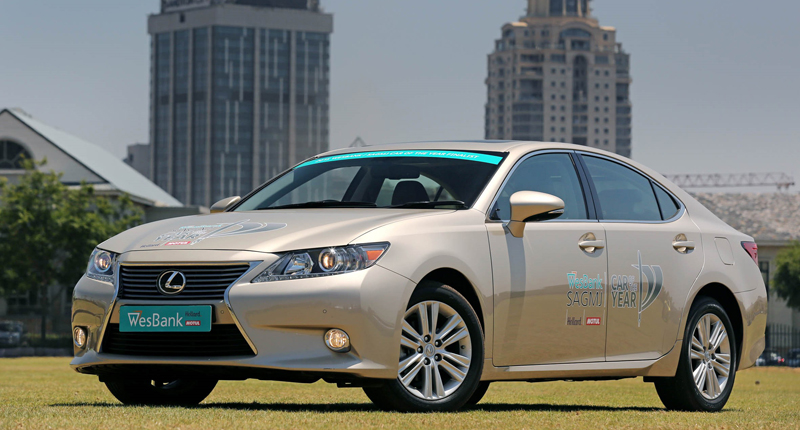 The Lexus ES has picked up the baton dropped by the Accord. Spacious, comfortable, well equipped and cheaper than the Accord 3.5l V6.

Cue the Octogenarian jokes, but the Lexus ES 250 is all the car youâ€™ll ever need. Its 135kW 2.5l motor is powerful enough without being wild or unruly. Itâ€™s a luxury saloon, designed to get you home in time for tea, without leaving you a breathless, white knuckled mess.

It suffers from elements of Toyota syndrome howeverâ€¦ doing everything adequately and nothing well. This might be a car to watch on the awards night though. 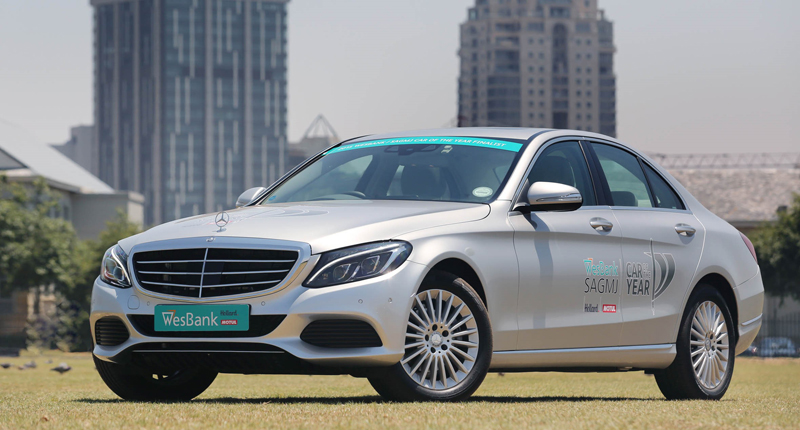 A rival to the BMW 3-Series

For the last few years the Mercedes-Benz C-Class played second fiddle to the BMW 3 Series. The engineering, build quality and overall experience were good, but never quite as good as the BMW.

The current C-Class has Mercedes aiming squarely at the heart of the 3 Series and it is worthy every cent of its R478 129 (R25 282 more than the BMW 320i auto) asking price. The worry here is the same as the M4: Does the C Class represent a significant stride over its previous generation and its rival models? To this I say no. It has simply equaled the playing field. 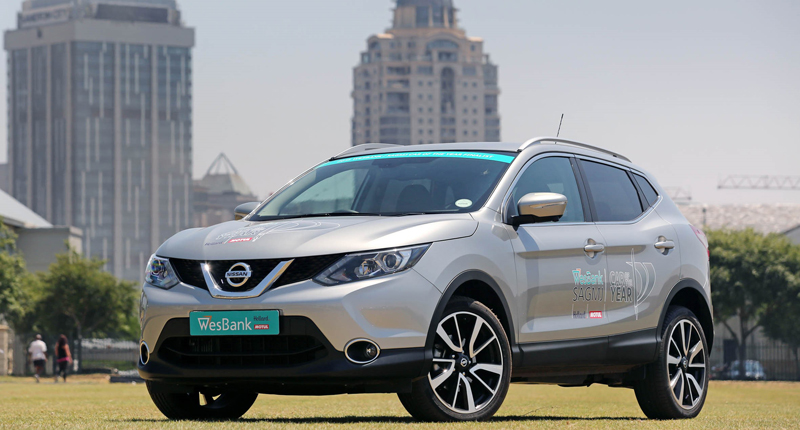 The first generation Nissan Qashqai was known for being honest, reliable and a sturdy family vehicle. The new one seems to have lost some of that sturdiness that made the previous model so popular. The CVT gearbox feels outdated and the gadgets, like the reversing camera, feel cheap and tacky.

The biggest issue with the Qashaqai is just how forgettable it is. I drove the finalist 1.6dCi Acenta Auto in November and, when writing this piece, I struggled to remember anything about it except that the gearbox was whiney, like an old CVT. 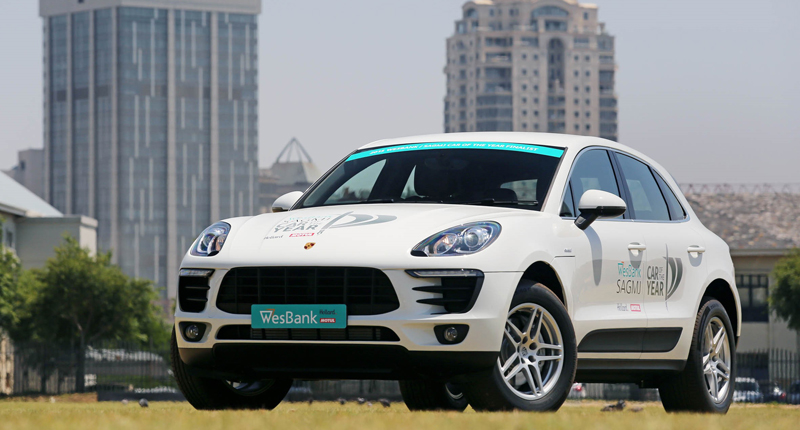 If the Macan wins, it will set a number of standards: First SUV to win the competition, first brand to have three back-to-back wins and possibly the first brand to cause a civil war between journalists.

I need to concede right now that the Macan is the only car on the list I havenâ€™t driven, even for five minutes. Everyone who has driven it says that it is magnificent: fast, balanced, handles like a sports saloon and feels beautifully engineered.

My concern is the space the Macan occupies: Is it significantly better than the BMW X3 or Range Rover Evoque? Iâ€™m certain it’s better, but how much better? The Mid-Size Luxury SUV segment is so good that I feel any new models have encountered the law of diminishing returns. 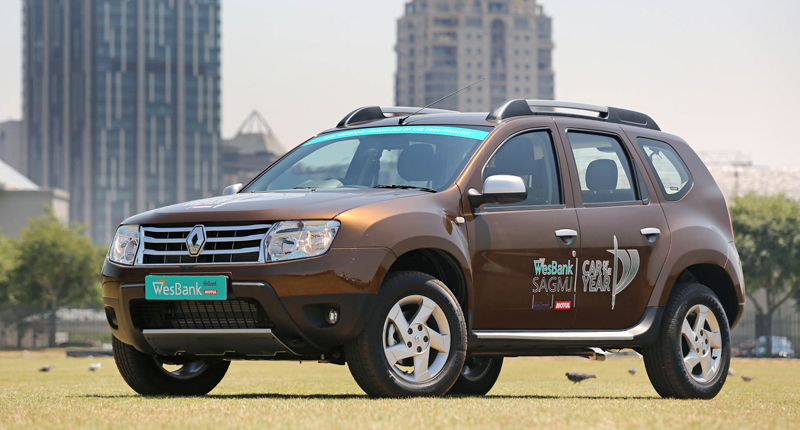 The Renualt Duster is an interesting small SUV. Designed and built in Romania, itâ€™s a rough little SUV with a lot of standard equipment, a robust engine and an affordable price tag. A number of people think the Duster is too coarse and agricultural to be Car of the Year, but, within among its rivals, it offers something unique: Affordable off-road ability and usable town characteristics. It has managed to wedge itself into the gap between the soft-roader Daihatsu Terios and the rugged but tiny Suzuki Jimny. My money is on the Duster for the 2015 Car of the Year title. 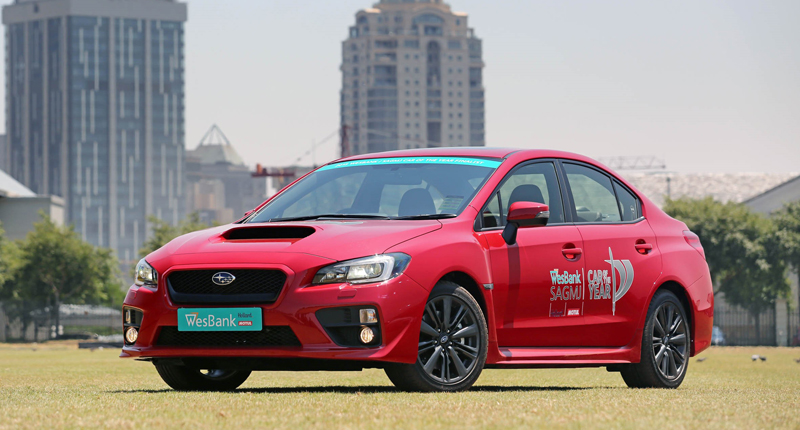 There are two schools of thought on the Subaru WRX: One says that itâ€™s a great drivers car and the new 2.0 turbo charged engine has brought the WRX in line with its rivals. The other says that the WRX still feels like it’s stuck in 2009 with an outdated interior, dull looks and performance that, while enjoyable, is nothing to take note of. Iâ€™m in the latter camp. I have tried and tried but I cannot work out how the WRX made the list of finalists where the Audi S3 sedan did not. The S3 feels so much more complete against the WRX. The Audi may be R85 000 more expensive than the Subaru but it feels like youâ€™re getting far more for your money. 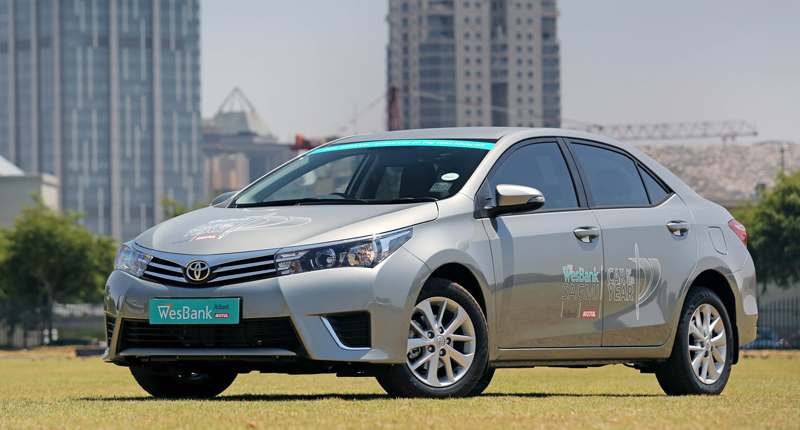 The trusty Toyota Corolla. If COTY were about the â€˜best buyâ€™ offering, the Corolla would likely have won already with a large dealer network, affordable pricing and great package. I just feel that it suffers from â€˜Toyota Syndromeâ€™. That is, it does everything suitably but nothing well. It looks rather average, is entirely acceptable to drive and is well equipped but you never think â€˜Well. This car is pretty good.â€™ A best buy winner but certainly not Car of the Year.

Finalists sorted by Country of Origin and Body-Style

Past Winners Sorted by Manufacturer, Country of Origin and Body-Style

The past few COTY events have seen controversial winners from Porsche and 2014/2015 competition could see a repeat performance. This time however, the Porsche Macan is probably the most deserving. Other vehicles which I would be happy to see win is the Renault Duster (charming little diesel offroader) and the Citroen C4 Picasso (brimming with spec, terrific engine and futuristic good looks). If you asked me who would be a safe bet, I’d go with Audi A3 sedan and the Mercedes-Benz C-Class.

The Nissan Qashqai and Mercedes-Benz C-Class are each highly polished, utterly compelling packages. And I bear a particularly soft spot for the CitroÃ«n C4 Picasso. But, ultimately, I believe the Audi A3 Sedan – which, funnily enough, is one of two finalists I’ve not driven – will win out.

There you have it. The break down and my thoughts on the 2015 Wesbank / SAGMJ Car of the Year competition. The final evaluations have taken place and jurors have placed their votes. The final winner will be announced at approximately 9pm on Wednesday 18 March 2015.

The SA Guild of Motoring Journalists has run the SA Car of the Year competition since 1986, with WesBank â€“ one of South Africaâ€™s largest vehicle finance institutions â€“ as its headline sponsor since inception. Motul and Hollard Insurance supply support sponsorship. 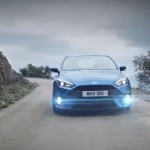