If you want to climb every mountain and ford every stream in total luxury, there aren’t many options out there better than a Range Rover.

But while the brand may now be a byword for luxury, that hasn’t always been the case.

Want proof? Look no further than the video Range Rover’s released to mark the brand’s 45th anniversary. The video, which features everything from the very first Range Rover to the current fourth generation model, launched in 2012.

The first Range Rover, while slightly more comfortable than Land Rovers of the time, was still pretty utilitarian. In fact, it came standard with vinyl seats and plastic dashboards that were designed to be washed down with a hose.

That’s a world away from the Land Rovers of today. The SVAutobiography, for instance, is built by Land Rover’s Special Ops division. Aside from its hulking great V8, it features reclining rear-seats , a chiller compartment and powered deployable tables. Solid aluminium coat hooks are incorporated into the rear pillars while, on the floor, there are aluminium seat rail finishers and deep twist pile mohair carpet mats.

While the video is pretty big on visuals and short on content, it should still provide a few moments of nostalgia for Range Rover fans. 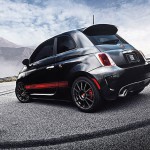