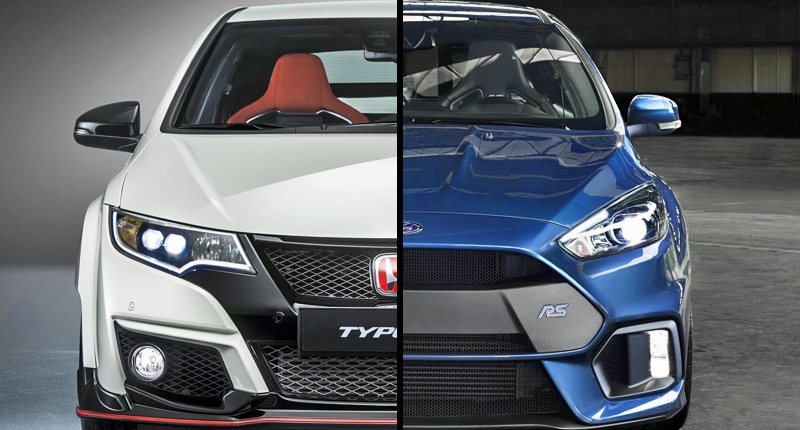 It’s a battle as inevitable as death and CO2 taxes. And one that – for the time being, anyway – can take place only on paper.

Yes, we’re talking about the mouth-watering matchup between two of the most keenly anticipated hot hatches of recent years. One from Japan and another from America. Sort of.

In the red (and sometimes white) corner, we have the Honda Civic Type R, which has just enjoyed its international launch. And in the blue corner? None other than the Ford Focus RS, which we can expect to roar into showrooms around the world in 2016.

Sure, it’d be exceedingly interesting to pit these two scorchers against each other out on the track, but since that’s not yet quite possible, we thought we’d settle for a theoretical, on-paper shootout.

Of course, Ford is keeping its performance cards decidedly close to its chest, but that hasn’t discouraged us from putting together something akin to a real-life game of Top Trumps.

Under the Honda Civic Type R’s bonnet lurks a 2.0-litre VTEC four-pot turbocharged to within an inch of its petrol-slurping life. The Japanese automaker claims a peak power output of 228kW at 6500rpm (redline arrives at 7000rpm), while a turbo-flavoured 400Nm is on tap from 2500rpm to 4500rpm. The result is a sprint from standstill to 100km/h in around 5.7 seconds and a top speed of almost 270km/h. We pity the front tyres… The Ford Focus RS, on the other hand, delivers its oomph to the tarmac via an all-wheel drive system. Although Ford hasn’t yet revealed official figures, it has let slip that the turbocharged 2.3-litre four-cylinder will make “over 235kW” and redline somewhere around 6800rpm. Of course, the clever AWD system (and launch control) will almost certainly make it quicker off the line – and probably faster to three figures – than the sizzling Civic.

Neither company has entertained any of that flappy-paddle nonsense, with both hatches employing six-speed manual gearboxes instead (cue cheers from purists). Honda says that the Civic’s “gear-change feel is designed to be the best in Type R history”, with final drive delivered through a helical limited slip differential. The transmission even boasts its own dedicated oil-cooler, for goodness’ sake.

Ford, meanwhile, says its gearbox has been “optimised for the enthusiast driver with a shorter gear-lever to deliver faster and more accurate shifts”. Drive is sent through twin electronically controlled clutch packs on each side of the rear drive unit, which manage the car’s front-to-rear torque split, and control the side-to-side torque distribution on the rear axle. Honda has squeezed a clever four-wheel adaptive damping system into the Civic Type R, which should afford the angrily styled hot hatch the ability NOT to shatter the spines of its occupants when the tarmac turns anything other than silky smooth. The vehicle’s new “+R mode”, which brings to life a number of dynamic enhancements, will see the ride stiffen appreciably when the right road presents itself. Honda says it was unable to find tyres that “naturally suited the character and nature” of its latest manic creation, and thus roped in Germany’s Continental to fashion bespoke rubber. As a result, the unique, high-rigidity 19-inch alloy wheels are wrapped in special 235/35 R19 tyres, which no doubt cost a pretty penny.

Ford, meanwhile, approached France’s Michelin to develop a choice of high-performance tyres – in exactly the same size as the Honda’s – for the RS. The standard Pilot Super Sport tyres are recommended for “every-day use”, while the optional Pilot Sport Cup 2 tyres ostensibly deliver “enhanced vehicle dynamics” out on the track. Details on the Ford Focus RS’s gadgetry, however, are a little thin on the ground. But we do know that the there’s a little button that will ostensibly allow the driver to unleash his or her inner Ken Block. Yes, the RS is equipped with a “Drift Mode”, which apparently works with the obligatory electronic nannies to facilitate all sorts of crazy oversteer. 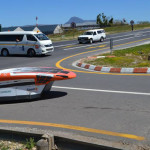