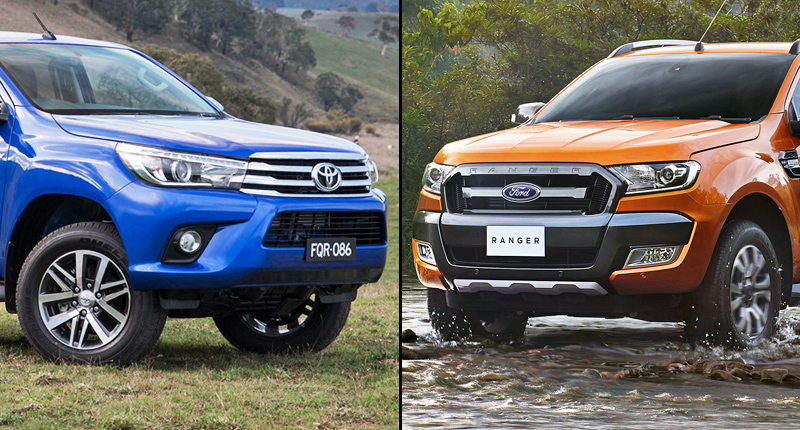 In South Africa – just as in numerous other bakkie-mad countries – you’re either a Hilux man or a Ranger man. It’s really that simple.

No two other compact pickup trucks boast as vociferous a following as this bundu-bashing pair. And the monthly sales statistics prove it.

Locally, the next compact pickup in line is the Isuzu KB, which struggles to manage even half of the Hilux’s monthly total, while the likes of the Volkswagen Amarok and Mazda BT-50 (which is essentially a Ranger underneath) needn’t even bother turning up.

But, despite the fact that the brand new Toyota Hilux has only just been officially unveiled in Thailand — and the updated Ford Ranger has yet to go on sale itself — fiercely loyal fans have already decided which is superior off-road, which offers the most car-like experience, and which is, well, just plain better.

However, seeing as we’ve not yet driven either, we thought we’d take a step back from the fanatical mud-slinging and pit the two range-topping, diesel-flavoured double-cab models against each other on paper.

Yes, this shootout is purely theoretical — and some information has yet to be confirmed — but it should at the very least serve as an interesting comparison ahead of the two pickups’ respective debuts. The top-of-the-range eighth-generation Toyota Hilux finally bins its 3.0-litre turbo-diesel heart, instead employing an all-new, more efficient 2.8-litre version linked to a six-speed self-shifter. This (purportedly more refined) oil-burning four-pot churns out 130kW, which represents a 10kW increase over the outgoing motor. Peak torque, however, rockets from 343Nm to a claimed 450Nm (or 420Nm in the manual model), which will undoubtedly make the Hilux more user-friendly on tarmac and even more effective off the beaten track.

The facelifted Ford Ranger, meanwhile, retains its trusty 3.2-litre five-cylinder turbo-diesel mill, which bests the smaller Hilux engine with peak outputs of 147kW and 470Nm. It’s a familiar unit with a proven track record, and has been further refined (thanks mostly to a revised exhaust gas recirculation system) to deliver a claimed 18% improvement in fuel economy. The new Hilux, when equipped with the 2.8-litre engine, will be available with both six-speed manual and six-speed automatic gearboxes. On all-wheel drive models, the Japanese automaker has finally moved over to electronic 4×4 switchover controls, which means the familiar second stubby gear-lever is a thing of the past. According to Toyota, the Hilux will be the world’s first pickup to feature a rev-matching system to ensure smooth shifting. The big Ford, meanwhile, soldiers on with its existing transmission options (six-speeders in manual and auto guise), also boasting an electronically controlled transfer case and low-range all-wheel drive gearing. Towing capacity remains a claimed 3500kg, something the top-spec Hilux can finally match (thanks to a 1000kg improvement).

The upcoming Hilux employs a completely new rigid frame, which is linked to upgraded leaf spring suspension and new shock absorbers. The brand further says that suspension tuning has been “optimised”, so we can expect a far more comfortable ride that the outgoing model currently serves up. The maximum payload increases to 1240kg. Ford, in turn, has countered with revised suspension settings of its own, promising “greater comfort and handling” from its double-cab. In addition, the American automaker says the Ranger’s power steering will provide a “more precise” feel than before. The range-topping Wildtrak’s payload is 1000kg, although other models in the line-up go as high as 1291kg. The new Toyota Hilux will, of course, introduce a far plusher cabin, which will feature a tablet-like electrostatic touchscreen as well as a nifty multi-information display sandwiched between the speedometer and tachometer in the instrument cluster. There’s also push-button start, automatic climate control (with rear vents), up to seven airbags, trailer sway control, downhill assist control, and hill assist control. Overall, we can expect the Hilux to boast an interior that’s more car-like and less agricultural. The Ford Ranger, which was already rather car-like on the inside, will gain the brand’s SYNC 2 infotainment system – which facilitates voice control of systems such as climate control, entertainment and navigation – linked to an eight-inch touchscreen display. It also features a dual-TFT instrument cluster, and the Wildtrak model will come standard with an eight-way power adjustable driver’s seat. In terms of safety, the Wildtrak steps things up considerably, offering items such as lane keeping alert, lane keeping aid, adaptive cruise control, driver impairment monitor, hill launch assist, hill descent control, and adaptive load control. 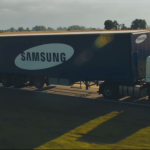