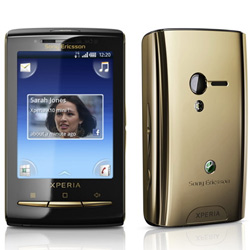 Style is a rare commodity in the cell phone world and is usually first to go in the quest to deliver a decent phone. Yet somehow, Sony Ericsson has matched power and class in perfect proportions to consistently produce some of the most eye-catching phones available. The XPERIA X10 mini is a perfect example of this harmonious relationship.

The first and most noticeable aspect of the X10 mini is that it is, in fact, hard to notice. Not due to a lack of style, but rather because of its remarkably small size. The first glance comment from all onlookers is, “Where is the rest of it”?  It’s tiny. I would even go as far as to say the skinniest jean’s pocket would be no struggle for the abnormally small body size of 83mm long and 50 mm wide.

With a 2.55” scratch resistant touch-screen dominating the face of the device, it quickly becomes apparent that this phone is not to be underestimated. The customised Android OS v1.6 allows for seamless and intuitive navigation of the user interface.  The OS is said to be upgraded to Android v2.1 by the end of the year, limiting some of the current apps like “Whatsapp”.

With almost perfect touch-screen sensitivity, scrolling from top down, left to right, one can traverse the extensive range of apps and widgets available. A neat feature of the UI is that it does not limit the number of widget panes, so each time you add a widget, a new screen appears in your preferred order.

Sony Ericsson has also included its Timescape UI as a complete integration tool to sync your SMSes, Twitter/Facebook notifications into a vertical scrolling interface.

I realise the next bit is not so important but is just a clear sign that the interface was well thought out. The alarm application is simple with all the functionality you require. Multiple alarms can be set with definable tones and a really nice snooze turn off slider.

In the style department, this X10 mini is the Natalie Portman of phones — compact, sexy and can act tough if needs be. Designed with a flush face and three footer buttons for 1) contextual menu, 2) home and 3) back.

The rounded back of the device allows it to fit cradled in your palm with the 5 megapixel autofocus camera with LED flash and VGA video recording sitting in the middle. The camera can produce some decent photos with a maximum image resolution of 2592 x 1936 pixels.

Sony Ericsson has also gone out of its way to enhance the relationship the user has with his/her phone. Along with the phone, you receive more covers than a Led Zeppelin tribute band. You can literally dress your phone to meet any occasion and although I mainly stuck with the matt black, I know people who would take full advantage of the Gold, Pearl White, Black, Pink, Lime, Red, and Silver coloured covers included. The initial battery life on the phone is less than a day long, which is not completely unexpected in light of the smart phone aspect. However, over time and after a number of charges, the battery life seemed to extend to two, even three days, without me needing to reduce the processing load. But take note that the battery is not user-removable and if faulty, would need to be professionally replaced. On the positive side, this does mean you can replace the SIM card without the hassle of removing the battery.

I can honestly say I would recommend this phone to my family. I would suggest they first look at the XPERIA X10 or X10 mini Pro with slide-out keyboard, as the lack of qwerty keyboard can be a nuisance but not a deal breaker in my opinion. Both are slightly larger but made to suit different needs.

However if you’re the type of person who owns a Chihuahua and wants a matching compact, simple phone with all the smart phone functionality you require, then no need to keep looking.

Your accessory has just found you.