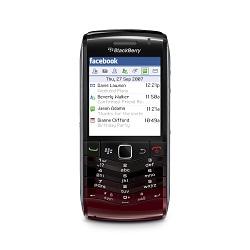 If you’re a BlackBerry purist, you might view the Pearl 3G 9105 with its T9-style keyboard as blasphemous; the result of an unholy union between a Nokia “candybar-style” handset and a traditional QWERTY-style BlackBerry smartphone. Look closer however, and you’ll find a powerful device that cleverly bridges the gap between run-of-the-mill feature phones and high-end BlackBerry smartphones.

Since 2006, when the first Pearl was introduced in the form of the 8100 series, the Pearl line has been known as a provocative proposition — a paradox of sorts in a family of smartphones where a traditional QWERTY layout was seen as the quintessential BlackBerry experience.

With the more compact 8100 series, RIM condensed the traditional 35 letter BlackBerry keyboard to 20 keys. This was done by placing two letters on each key, for example “QW” on the first, “ER” on the second and so on. To facilitate text entry on the condensed keyboards of the Pearl line, RIM created their own proprietary predictive text technology, called SureType.

Fast forward to 2010, and RIM introduces the Pearl 3G 9100, and 9105. The 9100 was released exclusively in the USA and received the same type of keyboard as the 8100 series of old. The 9105, however, was introduced to Europe with yet another new keyboard layout.

Sporting only 14 keys, the 9105’s keyboard is a throwback to the T9 keyboard designs of the ’90s, but uses a variation of SureType, instead of the patented T9, for predictive text input.

If you’ve gotten used to a traditional QWERTY experience, this keyboard will no doubt prove tricky to revert back to. However, if you are planning to migrate from a non-BlackBerry handset with a T9 style keyboard, you’ll find the 9105 offers one of the best multi-tap and predictive text experiences on any phone, thanks to SureType.

Start typing a few characters, and SureType will deliver a drop down menu of suggestions that changes in real time. SureType also learns new words by letting you spell them and pays attention to words you select most often from drop down suggestions, and therefore only gets quicker the more you use it.

Things I loved about the Pearl 9105

It’s small and yet packs the power of a high-end BlackBerry. 108mm high, 50mm wide and only 13.3mm thick, the Pearl 9105 weighs a mere 93 grams. It’s a matter of personal choice, but I found the design to be quite dapper. The sleek black finish and scalloped edges are recurring themes all over the device, including the keyboard and refreshingly, there’s not a chrome finish to be found.

The screen is gorgeous. As mentioned earlier, the portrait 320 x 400 pixel resolution works beautifully on the 2.25-inch screen and video playback looked amazing. The external speaker was really bright and clear sounding as well, even at high volume and there are dedicated lock/media buttons at the top, and volume rockers on the right. A hands-free headphone set is included, but you can swap it out for your own set thanks to the Pearl’s 3.5 mm headphone jack.

Despite launching with OS5, the Pearl 3G is scheduled to receive OS6 soon, which will be available as a free upgrade. OS5 performs really well thanks to the Pearl 3G’s spritely 624 MHz processor and 256 MB of application memory. Furthermoire, a 2GB microSD card is included with purchase, and supports card sizes of up to 32GB.

The Pearl 3G is the latest to receive the blessing of high-speed 802.11n Wi-Fi and also packs built-in GPS. All your social media, instant messaging, web browsing and up to 10 email accounts are supported over a blazing fast HSDPA 3G connection – which means simultaneous voice and data – and an unlimited BlackBerry data plan.

RIM promises up to five hours of talk time and up to 18 days of standby, and in my experience the Pearl 3G lasted the entire day and then some, with some browsing, emailing and lots of instant messaging.

There are left and right convenience keys, with the right hand key programmed by default to activate the 3.2MP camera with LED flash, which took good pictures and recorded video at 640 x 480, but don’t expect too much from it. The Pearl 3G is certainly not a high end camera or video device.

The trackball, the Pearl’s original namesake, has been replaced with a much improved trackpad solution, which is now standard on most BlackBerries.

Though not intended to be a serious web browsing device, the browsing experience on the Pearl 3G is let down by the archaic BlackBerry browser included in OS 5. Pearl 3G owners can however look forward to the much improved WebKit browser coming in the future Pearl 3G OS6 update.

The build quality on the Pearl 3G is somewhat lacking. The battery latch kept creaking as it doesn’t sit completely flat against the battery, and the right convenience key required a lot of pressure to activate the camera.

I found the positioning of the speaker at the bottom of the phone to be a little awkward, as most videos require you to rotate your phone into a landscape orientation. I liked the dedicated lock/media buttons at the top, and volume rockers on the right, but annoyingly, once the phone is locked, you can no longer use the buttons to navigate your playlists or adjust the volume.

During text entry, OS5 didn’t switch automatically to multi-tap when entering URLs and the data transfer icon at the top right often obscured the text input method icons when I was cycling through them.

The Pearl 9105 is available on both Vodacom and MTN in South Africa, and you can expect to pay around R250 for a 24-month contract, which includes unlimited on-device data usage.

The Pearl 3G combines the compact form factor of candy-bar style handsets, with the high-end BlackBerry features and despite questionable build quality and a sub-par web browsing experience, it remains a compelling option for T9 fanatics, at a good price.

Smartphone users of traditional QWERTY keyboard layouts should consider the cost-effective Curve 9300 instead, but non-QWERTY fans will find the 9105 to offer one of the best Multi-tap and predictive text experiences on any phone, thanks to SureType.