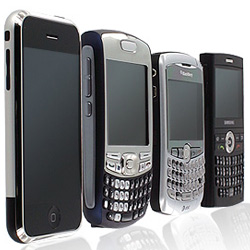 According to Gartner, smartphone sales increased by 96 percent in the third quarter of 2010. Over 80-million of more than 400-million handsets sold over this period were smartphones. That’s about 1 in 5 of all mobile phones sold worldwide, and a lot of this phenomenal growth can be attributed to the meteoric rise of the Android platform.

As South Africans, we stand with our noses pressed up against the window, watching the likes of Europe, Asia and the US get first dibs on the latest smartphone technologies. Although the influx of smartphones into our country is less timely, and more of a trickle than a firehose, we do however, have a great selection of some of the world’s finest offerings available to us.

Let’s take a look at some of the best smartphone choices currently, and soon to be available on South African shores, on each of the major platforms.

The Apple iPhone 4 32GB. This phone needs no introduction. With 250 000+ apps, 1GHz processor, 720p HD video recording, 5 megapixel camera, 32 GB onboard storage, 3.5-inch “retina” display with a 960 x 640 resolution, it’s an industry leading powerhouse. If you’re tied to a 2 year contract, the 32 GB version will ensure all your app and high definition multimedia needs are more than adequately met for the long haul.

Available from Vodacom and MTN.

Samsung Galaxy S i9000. With millions of units sold in both the US and Japan, the Galaxy brand has been an amazing success for Samsung. The Galaxy S is Android 2.2 ready, packs a gorgeous Super AMOLED 4-inch screen with 480 x 800 resolution, 5 megapixel camera with 720p HD video recording capability, and provides snappy performance thanks to its 1 GHz processor. The Galaxy S offers 8GB or 16GB of internal memory, plus the ability to add up to 32GB more with a microSD card. Plenty of space for the 80 000+ apps availab for the Android platform.

Available from Vodacom, MTN and 8ta.

HTC Desire and HTC Desire HD. The Desire series of HTC phones are some of the best HTC has to offer, not only to South Africans but also the whole world. With 1 GHz processors, 720p HD video recording, WVGA 480 x 800 screen resolutions, and Android 2.2 availabilty for both these phones, the Desire and Desire HD are bleeding-edge Android smartphones. The Desire offers a slightly better looking display with more densely packed pixels on a 3.7-inch Super AMOLED or Super LCD display. The Desire HD however, offers better memory, storage, and Wi-Fi connectivity, and the HD’s 8 megapixel camera with better flash wins over its brother’s 5 megapixel version.

BlackBerry Torch 9800. Considered to be Research in Motion’s flagship Blackberry, the Torch offers a 3.2-inch 480 x 360 pixel capacitive touch screen, a physical keyboard and an optical trackpad. It packs a 624 MHz processor, 512MB Flash memory and 4GB built-in storage capacity, with an extra 4GB SD card included in the box. The Torch also has a 5 MP camera with flash and auto focus and the usual suspects such as GPS, Wi-Fi, and 3G HSDPA support. The Torch is the only device that comes standard with BlackBerry OS6.

Available from Vodacom and MTN.

BlackBerry Bold 9780. Not yet launched but confirmed for South Africa, the non-touch screen 9780 for BlackBerry purists will feature the same core specifications of the Torch, but will instead have a 2.44 inch screen with a 480×360 resolution. It will be RIM’s second BlackBerry that launches with OS 6, and will be, in my opinion, the ultimate BlackBerry for serious enthusiasts.

Both these phones come with unlimited data plans, and a new standards-based WebKit browser.

Nokia N8. The N8 is a gorgeous device in terms of hardware. It has unique build styling and with a 12 megapixel camera that can also record 720p video, this phone will strike a chord with photography enthusiasts. The N8 comes to us courtesy of the new Symbian 3 platform, and despite Nokia’s recent problems and criticisms, Nokia purists are sure to love the improved Symbian experience. The touch-only N8’s 3.5-inch display is of Super AMOLED flavour and has a 640 x 360 resolution. The N8 sports both a CPU at 680 MHz and GPU to tackle graphic intensive tasks.

The N8 boasts a hefty 16GB of built-in storage, and of course a MicroSD slot which adds up to 32GB more. With Wi-Fi, and GPS juxtaposed with an FM transmitter, the N8 is one for Nokia fans old and new. Nokia’s Ovi app store boasts more than 10 000 apps these days, and that’s certainly nothing to be scoffed at.

Available from Vodacom, MTN and 8ta.

HTC Trophy and HTC Mozart. While the Trophy’s 3.8-inch screen is slightly larger than the Mozart’s 3.7- inch screen, they share very similar specifications. Both pack 1GHz processors, plus 8GB of built-in memory, 720p video recording, 3.5 mm stereo audio jack, Bluetooth, HSPA and Wi-Fi connectivity, and largely unmodified versions of Windows Phone 7. Despite the exclusive offering to Vodacom customers, the HTC Mozart is marginally superior to the HTC Trophy in two ways. Firstly, the Mozart packs an 8-megapixel camera with auto focus and xenon flash, while the Trophy manages only a 5-megapixel camera with a single LED light. Secondly, the Mozart boasts a beautiful aluminium unibody construction.

The release dates for both the HTC Mozart and HTC Trophy in South Africa are set for December 2010, and it seems Samsung and LG handsets are scheduled for release of more Windows Phone 7 devices in the first quarter of 2011.