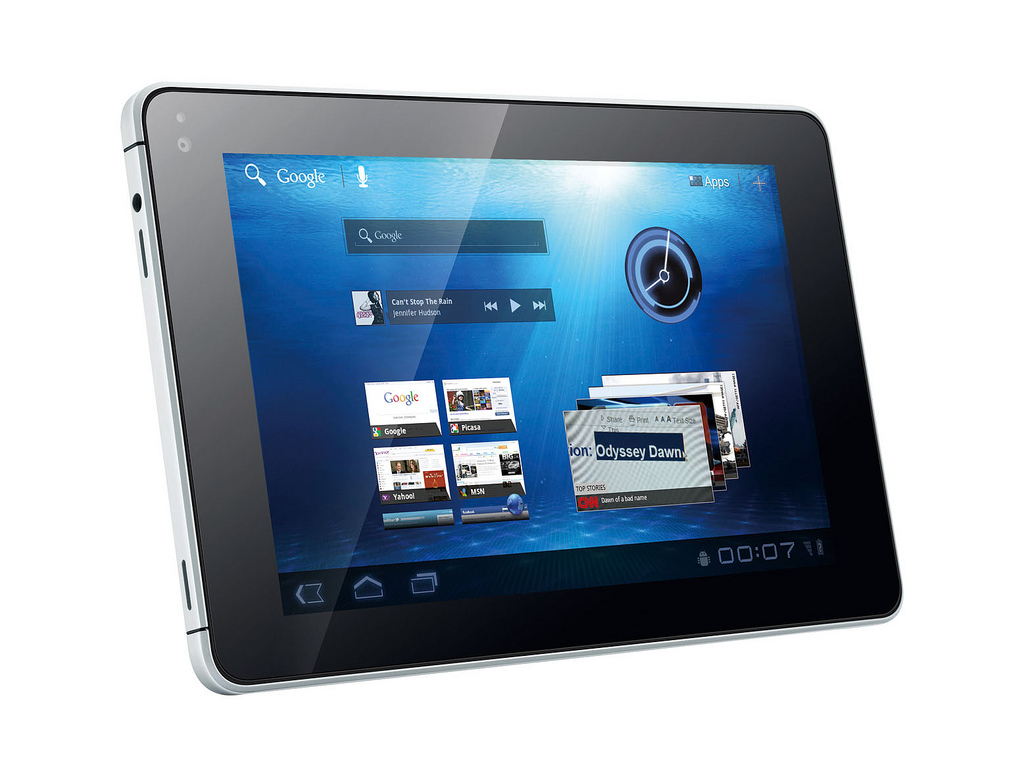 A tablet war is heating up in Asia as companies from China, South Korea and Taiwan challenge the dominance of Apple’s iPad on features and price. Huawei is the latest Asian manufacturer to throw its hat in the tablet ring with the launch of it’s 7″ MediaPad running Android Honeycomb.

Asia is a major battleground because of the presence of alternatives offered by top global brands like South Korea’s Samsung as well as cheaper choices from dozens of smaller firms, many of them from China.

By one estimate, Asia will account for about a third of tablet sales by 2015, triggering a race for market share by big and unknown brands alike.

Making its global debut at this week’s CommunicAsia trade fair in Singapore, the Huawei’s MediaPad sports Qualcomm’s dual-core 1.2GHz processor. It is just 10.55 mm thick and weighs 390 grams, making it much lighter than an iPad2.

The market is already abuzz with models such as Samsung’s Galaxy Tab, the HTC FlyerTM by Taiwan’s leading smartphone maker HTC and the ZTE Light tablet by Chinese manufacturer ZTE.

Add to these other Western brands such as the BlackBerry Playbook by Canada’s Research in Motion and a growing array of inexpensive gadgets from little-known vendors and the field is widening up for competition.

“We see Apple’s market share declining — in a growing market — as credible alternatives emerge from a variety of manufacturers,” said Tim Renowden, an analyst with technology research firm Ovum.

“The emergence of lower-cost tablets, predominantly running Google’s Android operating system, will be an important opportunity for Asian manufacturers,” he told AFP.

He said Samsung and HTC “are arguably the front runners with their experience producing smartphones”.

However, Chinese technology companies such as Huawei and ZTE “are also actively pursuing market share and can potentially succeed with lower-cost devices”, he said.

In addition, traditionally PC-focused companies like Acer and Asus of Taiwan have also launched some interesting tablet products.

“All of these players are really competing against each other, more than they are competing with Apple,” Renowden said.

Industry research firm Gartner has said the iPad accounted for a hefty 84 percent of the total 17.6 million tablets sold worldwide in 2010, with that share tipped to decline to 69 percent of 70 million to be sold this year.

Bryan Ma, an analyst with technology industry consultancy IDC, said although the iPad is expected to remain a major player in Asia, the region is different from Western markets.

Samsung is strong in South Korea because of nationalist sentiment, while the massive China market is awash in inexpensive tablets known as “white box” devices because of their obscure brands.

“In that sense there’s an interesting activity that’s giving Apple some competition. A lot of these guys are low-priced players,” Ma told AFP.

“They might not necessarily have that cool cachet that Apple has but… these Chinese vendors are selling these products overseas, to other developing markets as well like Indonesia, parts of the Middle East and Africa.”

Ovum’s Renowden said the Asia-Pacific market was big enough for several players, forecasting tablet sales to reach 50 million units in 2015 out of a global total of 150 million.

IDC’s Ma expects some competitors to fall by the wayside.

“Frankly, the market is over-saturated, there’s way too many vendors trying to participate in this market than there is demand for,” he said.