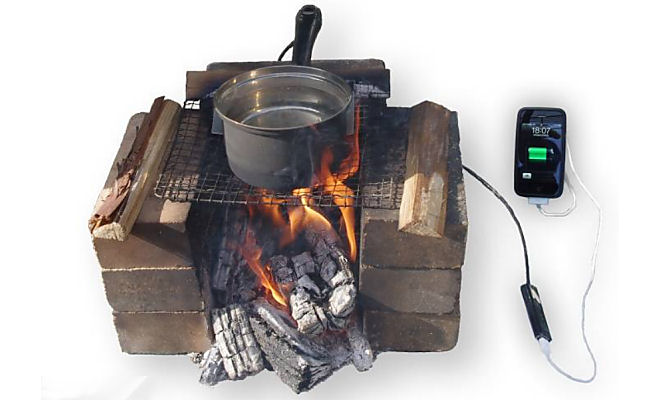 A Japanese company has come up with a new way to charge your mobile phone after a natural disaster or in the great outdoors — by heating a pot of water over a campfire.

The Hatsuden-Nabe thermo-electric cookpot turns heat from boiling water into electricity that feeds via a USB port into digital devices such as smartphones, music players and global positioning systems.

TES NewEnergy, based in the western city of Osaka, started selling the gadget in Japan this month for 24,150 yen (US$299), and plans to market it later in developing countries with patchy power grids.

“When I saw the TV footage of the quake victims making a fire to keep themselves warm, I came up with the idea of helping them to charge their mobile phones at the same time,” Fujita said.

The pot features strips of ceramic thermoelectric material that generate electricity through temperature differentials between the 550 degrees Celsius at the bottom of the pot and the water boiling inside at 100 degrees.

The company says the device takes three to five hours to charge an iPhone and can heat up your lunch at the same time.

“Unlike a solar power generator, our pot can be used regardless of time of day and weather while its small size allows people to easily carry it in a bag in case of evacuation,” said director and co-developer Ryoji Funahashi.

TES NewEnergy was set up in 2010 to promote products based on technology developed at the National Institute of Advanced Industrial Science and Technology, Japan’s largest public research organisation.

It also makes and markets equipment to transform residual heat from industrial waste furnaces into electricity.

The company says the pot will be used mainly in emergency situations and for outdoor activities, but also has uses in developing countries.

“There are many places around the world that lack the electric power supply for charging mobile phones,” Fujita said.

“In some African countries, for example, it’s a bother for people to walk to places where they can charge mobile phones. We would like to offer our invention to those people.”