More
Home
Subscribe
Skip
Continue in 10 seconds
Skip
By Nur Bremmen: Staff reporter
Read nextNintendo out for all gamers with “Wii U” console 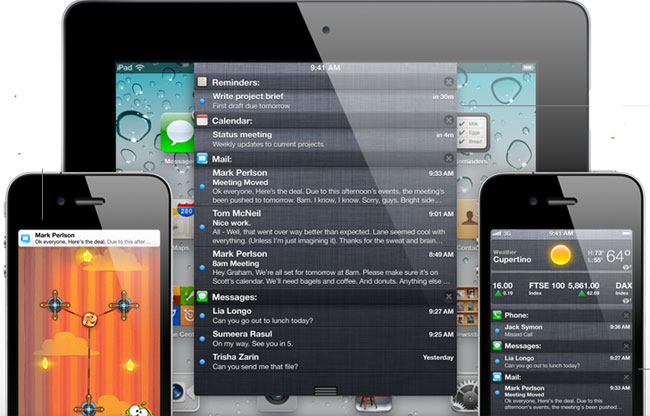 Apple has announced some dramatic changes to the operating system of their iPhone, iPad and Touch devices. At the core of the new updates is iCloud, a new music-streaming and online data storage service that can be accessed on devices from the iPad to the iPhone.

The announcements were made at Apple’s Worldwide Developers’ Conference (WWDC) in San Francisco by Apple executives that included a frail-looking Steve Jobs.

iCloud essentially demotes the role of the computer to “just another device”. Users’ data will be stored online, meaning users will no longer have to connect their new iPads or iPhones to a computer to first switch it on. It means that these computers will no longer be the back-up point for the iDevices’ data — it will now be on the Internet.

Apple says that users automatically get 5GB of free storage. Purchased music, apps and books, as well as your Photo Stream, don’t count against the free allotment. What will use up the space will be your mail, documents, Camera Roll, account information, settings and other app data.

The iPhone and iPad operating system will now run on iOS 5 (expected to be available in a couple of months time), featuring more than 200 feature updates and changes. iOS 5 will be available for the iPhone 3GS, iPhone 4, iPad, iPad2, iPod Touch 3rd Generation and iPod Touch 4th Generation.

Key changes in iOS 5 include:

Notification Center: Email, texts, friend requests and other alerts are unified onto one screen, accessed by swiping down from the top the screen no matter what app you are in, or where you are on your iPhone or iPad. The Lock screen of the devices now will also display notifications. Notifications also can include information like weather or stock prices.

iMessage: This is a significant change, and in many respects Apple is playing catch-up. Phone manufacturers like BlackBerry, which runs the successful BBM service, have been playing in this space for years. This is also a further death knell for that antiquated messaging system called SMSing. It allows iPhone, iPad and Touch users to send messages to each other (text, photos, videos, contacts, locations) via wireless or 3G. The new feature comes as part of the messages app, where a user would traditionally text or SMS. A takeover has begun.

Newsstand: Apple is now launching its own, allowing users to collect their magazine and newspaper app subscriptions here. It’s essentially a folder that lets a user access their publications quickly and easily. It comes with a new place on the App Store and users can also purchase direct from the Newsstand.

Reminders: This is Apple’s “to do” app, with some souped up bells and whistles. The thousands of to do, reminder and shopping apps out there can’t be too happy with this update, which effectively wipes them out. Users can set reminders, complete with due dates and locations. A cute innovation is that reminders can be location-based, so a user can set an alert to show only for when they reach a specific location.

Twitter integration: Now could it be that Facebook is paying the price for that teeny weeny insignificant shareholding that a certain Microsoft holds? In an apparent snub to Facebook, Apple is cosying up to Twitter, the more “mom-and-pop” social networking option. iOS 5 makes it easy to tweet from iPhones, iPads, or iPod touches. Users would sign in once and then are able to tweet from Safari, Photos, Camera, YouTube or Maps. The contacts app also applies friends’ Twitter usernames and profile pictures. There is also a nifty auto-complete for “@replies”, based on the info in the Contacts app.

Camera: This was a long-time overdue and a feature that many other smartphone operating systems have had for years. Apple now allows you to launch the Camera app right from the lock screen, using the volume-up button to snap your photos. There is also additional functionality: grid lines, pinch-to-zoom gestures, and single-tap focus and exposure locks to compose a picture. iCloud allows users’ photos to automatically download to their other devices.

Safari: The iPad now gets tabbed browsing and “Reading List” allows users to save articles to read later — all synced to iCloud. Controversially, Safari Reader allows users to display articles “without ads”, robbing many content providers of key revenue. Apple says that Safari’s general browsing performance has been improved across the board.

Mail: New features include formatting text using bold, italic, or underlined fonts; creating indents in messages; dragging to rearrange names in address fields; flag important messages; add and delete mailbox folders on the fly. There is also improved search for mail. Via iCloud, users can get a free email account that stays up to date on all devices.

Calendar: iPad now has a year view. Users can tap to create an event and drag to adjust the time and duration. iCloud lets users share calendars with friends and family, and it keeps your events in sync on all devices.

Multitasking on iPad: There are new moves and shortcuts to get around faster on the iPad. Using four or five fingers, swipe up to reveal the multitasking bar, pinch to return to the Home screen, and swipe left or right to switch between apps.

AirPlay Mirroring (iPad 2 only): AirPlay now supports “video mirroring”. Users can wirelessly stream whatever is on their iPad 2 to an HDTV via Apple TV. Everyone in the room sees exactly what’s on the iPad display on the big screen. When the iPad rotates or is pinched or zoomed, so it rotates on the big screen too.