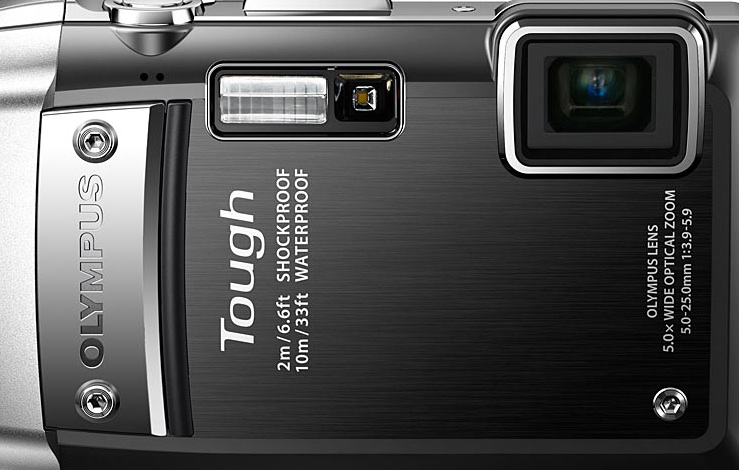 Review: Olympus Tough TG-810. Hard. Proper hard. Waterproof to 10m, drop proof 2m. Dust proof. Crush proof. You could build a house out of them if you had enough. The Olympus TG-810 is designed for the accident-prone and the frantically outdoorsy adventurer.

Before we do the Gearburn tear-it-a-new-A-hole (because we’re hyper-critical), let’s first pat Olympus on the back for what it did get right. 10m waterproof. Wow. Ten years back, if you wanted to take pics on a scuba dive you either coughed Greece’s sovereign debt for a waterproof enclosure, or you coughed the USA’s sovereign debt for a Sea and Sea underwater camera. This little guy not only goes deep, it’s built in manometer tells you exactly how deep (we didn’t get a chance to find out if it warns you it’s about to implode, my diving gear is a bit dusty). It’ll take a fall from 2m onto a hard surface, so if you’re lucky and a small bush (or someone’s head) breaks its fall, it could plummet from significantly higher. Dust-proof and crush proof. Works down to -10ºC. All good.
14 megapixel, and a reasonable (although not astonishing) maximum aperture of 3.9-5.9 (although most of the zoom range will be in 4.6-5.9 area, so low-light situations are not your friend). Olympus don’t publish a guide number on the flash, but 2.5-3.5m it’ll handle fine, so Even Stevens with a typical crushable, drownable compact.

What else? Oh, yeah… GPS, compass and manometer for depth/altitude are handy (although GPS is very slow to lock). It’ll do 720p video, and the 5x zoom gives you a 28-140mm equivalent.

Less is more
The TG-810 is, however, guilty of feature bloat to an almost grotesque degree. This is a practice so common with Asian manufacturers. Take a device that’s aimed at a particular niche market, in this case adventurers and outdoor action sports buffs. And then pack it to the gills with handy little doodads that they will almost certainly NEVER USE.

Like the automatic cat recognition technology. Not kidding. It does dogs, too. This, one supposes, gives them a marketing advantage at the retail store. “Now with Punk mode!” (seriously, it has this too). The development resources could have been used to refine the stuff that’s actually useful, like the GPS and autofocus.

Handling is not the TG-810’s strong point. The controls have been improved a lot since the TG-310, which had very fiddly buttons. Now it has a fiddly rocker switch and fiddly buttons – still very small and stiff, but at least a bit more glove friendly. If you’re in driving snow halfway up Monk’s Cowl, you’re probably wearing gloves, Olympus.

Hidden behind a large door that takes up the whole of the right hand side of the body are the memory cards (SD), USB connector (proprietary plug with combined power, data and movie-out), battery and type-D HDMI plug. This door is gasketed with a dual-locking mechanism.

It’s pretty heavy at 220g, but then again, you don’t really get tough and light. Unless you use titanium, but buying stuff like that is what got the Greeks and Americans into the trouble they’re in now.

If you want to take it deeper, you can get an enclosure good for 40m.

It takes pictures, too
Picture quality is decent enough – you’re paying largely for the ruggedness. The optics and image processing are not really up to the 14MP CCD – at low lights there’s plenty of noise, and while it has dual image stabilisation (optical and digital), camera shake is still a problem. There’s also visible artefacts in high-contrast situations (see the edges of the letters in the “Rotisserie” snap below), with some fringing. The intelligent autofocus is also not too smart – it generally guesses wrong in moving subject situations.

Gear it or Burn it?
Despite its manifest shortcomings, we definitely Gear this camera. It is tough as hell, and takes very decent pictures for a compact. While it is has far too many silly bells and whistles, it also has some quirky little features that you discover almost by accident – like “tap control” where a series of taps on the top, side or back does useful stuff – brilliant if you’re wearing heavy gloves, or shooting in awkward situations.

If only Olympus would pay more attention to the serious picture-taking stuff, and leave the gadgety frippery to their low-end party models. Can you spot the cat? The camera did, and shot it automatically.