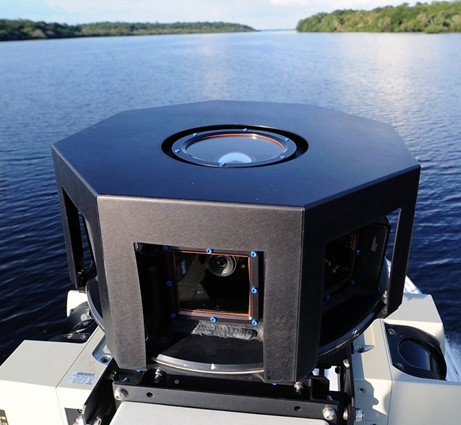 Two women washed clothes in the dark water of the Rio Negro as a boat glided past with a camera-laden Google tricycle strapped to the roof, destined to give the world a window into the Amazon rain forest. A “trike” typically used to capture street scenes for Google’s free online mapping service launched Thursday from the village of Tumbira in a first-ever project to let Internet users virtually explore the world’s largest river, its wildlife and its communities.

The project was the brainchild of Amazonas Sustainable Foundation (FAS) which two years ago went to Google Earth with an ambitious vision of turning “Street View” into a river view in the lush and precious Amazon Basin.

“It is incredible; all those months of planning and then having this technology here,” FAS project leader Gabriel Ribenboim said as the trikes went into action, one atop a boat and another pedalled on land.

“It is very important to show the world not only the environment and the way of life of the traditional population, but to sensitize the world to the challenges of climate change, deforestation and combating poverty.”

The trikes have cameras that continuously snap images in every direction. The pictures are woven into Google Maps and Earth services so people can virtually peer about as if they were there.

Satellite positioning equipment on trikes pinpoints where images are gathered.

“When I saw this I thought of the first probe they sent to Mars,” Jose Castro Caldas said as he took refuge in the shade next to a Street View trike in Tumbira.

“There must be masterminds at Google working on this,” he continued. “But it is funny to see how rustic it is, too — it is a bike with spoke tires.” The 30-year-old architect from Buenos Aires was in Tumbira helping construct an arts-and-crafts building to hawk local wares to tourists intrigued enough by what they see on Google Maps to visit in person.

“When I try to explain to people where I am, my friends think I must be in the middle of the jungle hunting to survive,” Caldas said.

“Even I didn’t know where I was coming to before I got here,” he continued. “Now, people are going to see this.”

One trike travels by river, documenting the journey, while a second is ridden, or pushed if necessary, through riverside communities.

Members of a Google team on Wednesday began teaching FAS members and local residents how to use the trikes and a special tripod-mounted camera tailored for capturing insides of schools, community centers, and other public spaces.

The camera, with a fish-eye lens to take panoramic sky-to-ground images, will also be used to recreate walks along rain-forest trails.

“We want the world to see that the Amazon is not a place only with plants and animals,” said FAS chief executive Virgilio Viana.

“It is also a place with people, and people who are not completely at odds with the current thinking of global sustainability.”

FAS hopes that the Google project will not only entice people to experience the wonder of the Amazon in real life, but show that people can thrive in harmony with the rain forest.

“People have learned how to live here for centuries,” Viana said. “In a way, this partnership with Google is a window that opens for us to show that there is a solution,” Viana added as he gazed out at the Rio Negro.

“Deforestation is not the result of stupidity,” he went on. “It is an economic decision; so we have to make people earn money with the forest standing.”

Eco-tourism along with forest and fishery management are being pursued as ways to support local communities without destroying rain forest, according to Viana.

Tumbira resident Maria do Socorro da Silva Mendonca told of how men here provided for families by illegally logging trees until FAS arrived and the area was declared a sustainable reserve.

FAS was established in 2007 with backing from the Brazilian state of Amazonas.

“The families had financial problems in the beginning, but now they are more balanced with the reserve,” Socorro said as chickens pecked at the ground nearby.

“With time, they noticed that education was the way out,” she continued. “Things have been changing because the men had to find jobs… like my husband; he is a carpenter.”

FAS built a two-classroom school in Tumbira where teachers in the Amazonas capital of Manaus teach lessons streamed interactively to students over the Internet in what was referred to as “distance learning.”

Socorro smiled as she confided that she had never heard of Google.

“I don’t know anything about the Internet,” the 40-year-old mother laughed.

She was excited by the prospect of people around the globe virtually visiting her village.

“I think it is wonderful because our community was never published anywhere, not even Manaus,” Socorro said. “Nobody knows we are here.”

The first phase of the project is expected to take three weeks. The goal is to capture a 50-kilometer (30-mile) stretch of the Rio Negro, and along the way train the local team that will keep the imaging gear to broaden the mission.

“We want to create a digital mirror of the world, and this is an important place on the planet,” Google Earth Outreach geo-strategist Karin Tuxen-Bettman said aboard a boat as the trike made its maiden run.

“Eventually, maybe we will have the whole basin mapped,” she said hopefully. “Who knows?”