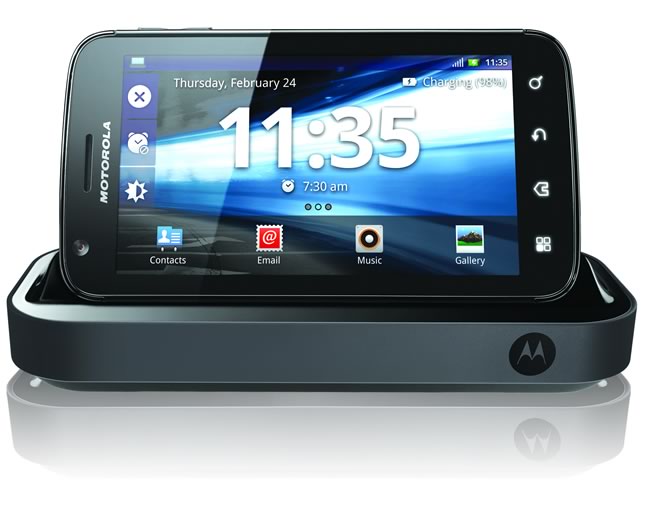 The ATRIX has hardware specs out the whatsit, with a one gighertz dual-core NVIDA Tegra 2 processor, a gig of RAM, a four-inch 960×540 qHD display, front- and rear-facing (5MP) cameras and the ability to record in 720p. It offers up to 48GB of storage (16GB internal and optional 32GB MicroSD card), 802.11n support, a 1930 mAh battery, two microphones for noise-reduction and a biometric reader for unlocking your phone at the touch of a fingerprint. The ATRIX’s party trick is, of course, its accessories. Both of the docks, the Lapdock and the HD Multimedia Dock, essentially amplify the phone’s capabilities through the Motorola webtop application.

The Lapdock provides an 11.6-inch screen, full keyboard, stereo speakers, and a battery that delivers up to eight hours of extra running time. In developing markets the Lapdock will cost between US$280 and $350, which starts to sound like the cost of a decent netbook. When plugged into either of the docks, you interact through the webtop application interface, which allows you to run Android applications on a larger screen, browse full websites on Firefox 3.6, send instant messages, check email, access files and make phone calls, all in a multitasking environment. The Entertainment Center feature allows you to show photos, play music and watch videos from HDTVs.

While using the webtop application, business users with an existing Citrix account can also use the Citrix Receiver application that provides access to virtual PC desktops as well as Windows, web and office applications hosted on Citrix XenDesktop.

It is interesting to note that the ATRIX will be marketed outside the US simply as the ATRIX not ATRIX 4G, but it does support 900 MHz. Could be the locals are a bit more sticky about attaching the magic fourth generation tag to 3.5G technology. Also note that although it launches with Android Froyo, an upgrade to more current Gingerbread version — which has dramatically improved performance in many devices — is slated to be available within the coming weeks. Despite the ATRIX’s party tricks, it will most likely do little to convince you to part with your iPhone if you’re not convinced by the Apple alternatives. If you’re an Android fanatic however, be assured that this is one of be the best Android phones you can buy right now, with one caveat. Although similarly specced in terms of processor and memory, the king of the Android universe, the Samsung Galaxy S II running Gingerbread, outperforms the ATRIX in most benchmarks.

The upcoming Gingerbread upgrade may level the performance field somewhat. Frankly, the accessories are nice to haves and the Galaxy S II can perform many of the ATRIX’s docking features via DLNA or a standard HDMI cable. The buying decision will most likely come to brand choice and style once you start doing the intractable maths of whose numbers are better than whose, although perhaps the ATRIX has more convenient multimedia features thanks to the dock as you can leave external devices plugged in and ready to go.

Despite some of the Galaxy S II’s superiority in terms of its camera and arguably display, the ATRIX’s better battery life, smaller form factor and Tegra 2 ecosystem might sway your decision.