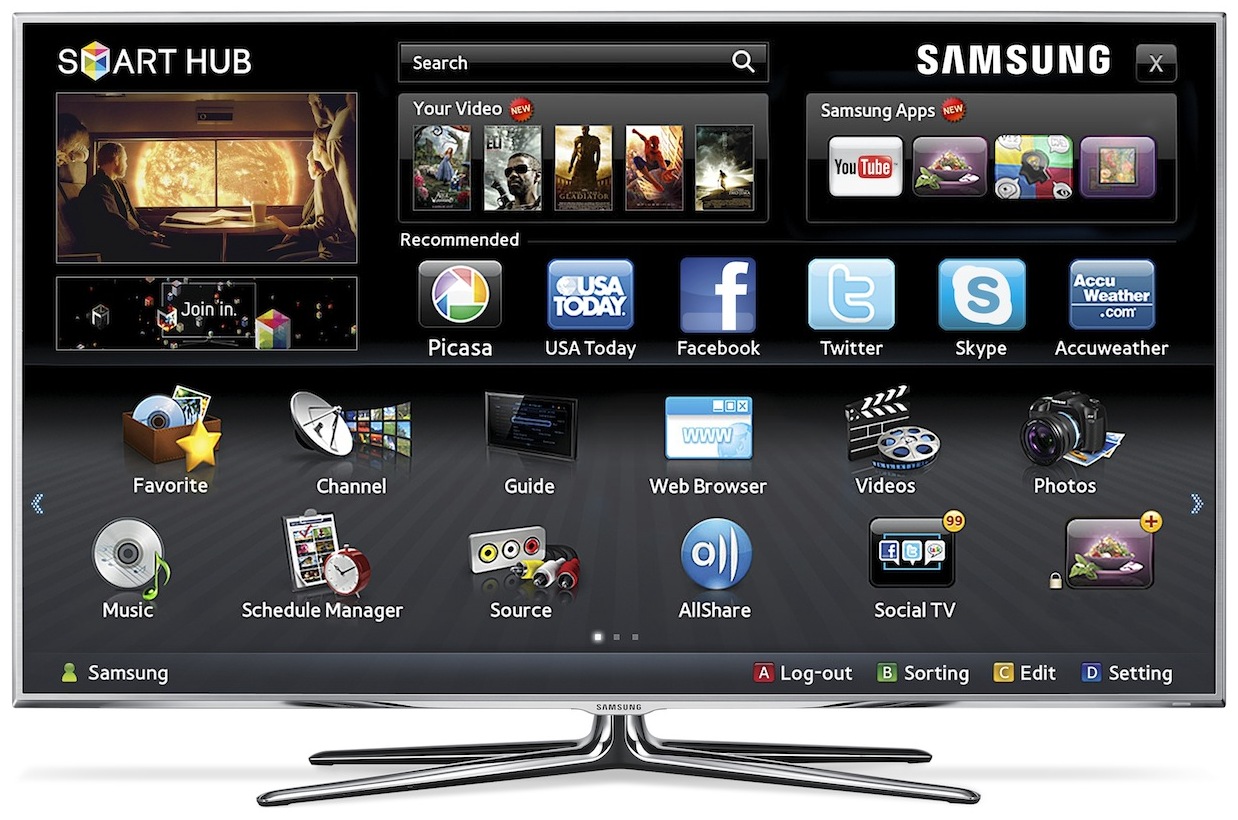 My previous sentiments towards the aptly dubbed “idiot box” were ones of apathy. This stigma has been around for decades, stemming from our manner of interaction. When dealing with a PC, you address the computer and dialogue begins. You ask for a task, it performs a function, and the dance continues. In the case of the television, you are sunk into your couch and dragged through the experience as a mere third person spectator. Samsung has somehow found a harmonious amalgam between the two with its SMART TV.

Samsung has an ideology that exceeds the confines of a single TV. Samsung’s goal of “convergence” is for users to seamlessly connect all their compatible Samsung devices through DLNA technology and allow them to interact in a synchronicity never before experienced in a commercial product. Using the company’s AllShare technology with the aid of built-in Wi-Fi technology, one can view, listen to and share all the movies, music and photos stored on these devices with relative ease. The stock remote that comes with the set is bulky and without a proper keyboard, so navigation can be cumbersome. Samsung have also released a double-sided remote with a full QWERTY keyboard on the back. The optimum solution, however, would be if you have a Samsung Galaxy S or Tablet. You can download the Samsung Remote App for free from the Android market or Samsung App store. This will give you a more convenient full keyboard to aid in online browsing through the SMART TV’s native browser. The native browser comes with Picture-In-Picture which gives you a small block in a corener of the TV while you browse, meaning you never miss a moment of action.

The impressive part of the interaction with the Galaxy Tab or S2 (mobile) is the ability to stream TV via the set to the mobile device. Yes, the TV acts as a hub which streams to your device as long as you remain within range of the Wi-Fi.

The SMART HUB is the operating system driving the convergence experience and becomes the gateway interface into the online world. The layout is straightforward with currently selected video source in the top left, search in the middle, and a showcase of your installed apps on the bottom. Currently Samsung Apps boasts around 400 applications, of which approximately 300 are free, and is looking into increasing that number to 1 000 by end of 2011. The most impressive of the apps is Social TV, which makes it easy to chat with friends and family in real time while watching the same TV content. By integrating social networks such as Facebook, Twitter and Google Talk, it becomes possible to G-chat, Tweet or update your FB status while watching TV. Skype is also in on the act with a downloadable app enabling video chat.

One nuisance, however, was the minimal buffer time on the YouTube app, making watching a clip with even with a reasonable line speed almost unwatchable and frustrating.

Some other major app brands have gotten in on the action with Pandora (preference based music player), Netflix (movie streaming) and Hulu, whch supplies you with episodes of the latest TV series you may have missed.

ESPN also provides a sports-related app giving users updates on news, scores and fixtures. An additional novelty for gaming has been introduced with Pacman, Tetris and various arcade and puzzle like downloads available to give the TV an added dimension.

One of the genius ways Samsung is driving innovation towards the creation of new SMART apps is through a community-driven competition dubbed the SMART TV Challenge. By making the software development kit (SDK) available to the public, budding developers are able to convert their tangible ideas into functional apps and contribute them towards the app community. Of course this is all in hopes of receiving a piece of the US$500 000 prize money.

Samsung seems to have a crystal clear vision of where it wants to take the TV — and ironically the vision is to blur the line between where the desktop begins and TV ends.