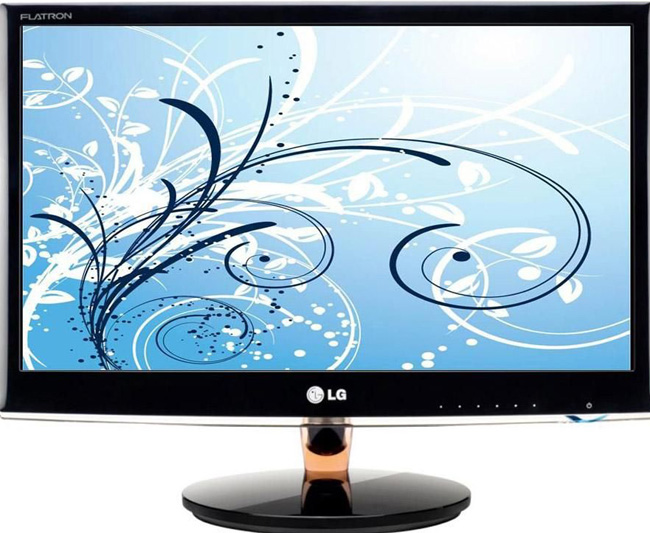 Sleek, black curved edges melding into a clear Perspex strip designed to house a single light. A bespoke amber arm, sitting off-centre, joins the ensemble to a raised circular base. No, it’s not some concept piece from a high-profile design house. It’s the LG Flatron IPS 236V.

Although LG has other products which are LCD/LED hybrids, this one is riding the LED train all the way. In fact, the Korean electronics giant has gone so far as to call the LED system in this and its other LED offerings “SUPER LED“.

As the name suggests, LG has also combined LED with IPS technology for this monitor. Now IPS, or In Plane Switching has been around since the 90s. IPS panels employ pairs of electrodes at the sides of each cell, running the electric field horizontally through the monitor material.

What all this means is that the image quality of the monitor should be incredibly crisp over a wide range of angles. With the IPS 236V it really is. Colours remain consistent even when viewing the screen from nearly side on.

That’s all well and good, but the colours still have to worth looking at in the first place. Once again, the monitor does brilliantly here. Then again, it’s supposed to.

Upon plugging the IPS 236V into my laptop (which is how I used it throughout the review period), there was no “Road to Damascus” moment, no sudden urge to rush out of the office and buy one for myself. Now, my laptop does have a hybrid LED/LCD HD screen, so it’s not like I was going from a horse-drawn carriage to an Aston Martin.

It was only after I’d lived with the IPS 236V for a while that I began to appreciate what it was actually capable of doing. I suddenly started paying more attention to my background pictures (a series of holiday landscapes I’d taken in December). Obviously I could now see more of the photos because of the extra screen size, but it also exposed some of the inadequacies in my photography, which had previously escaped notice.

The real moment of revelation, however, came when I started looking around at some of the other similarly sized monitors in the office. It was like looking into the past. My colleagues’ icons seemed just that much more pixellated, their colour display that much more muted.

The IPS 236V handles video as well as it handles anything else. I did have brief moment of ghosting when I was watching an HD clip but the monitor quickly rectified itself and it never happened again, even when the conditions were strenuously recreated.

The area where the monitor falls down, sadly, is the same which first draws you to it. That bespoke amber stand might look good but it’s not particularly practical. LG claims that you can swivel the monitor through nearly 360 degrees. Well I’m sorry, you just can’t. At all. If you want the screen to face another direction, you have to turn the base around or pick the whole unit up and turn it around. Pivoting up and down is also limited, but unless you want the screen to face up at you while you’re standing, that’s not really an issue.

Of course, absolutely none of this will be an issue if you decide to wall mount it, which unlike some of LG’s other LED monitors, is an option with the IPS 236V.

Gear it or Burn it
Gear it, but remember, there are other options out there.