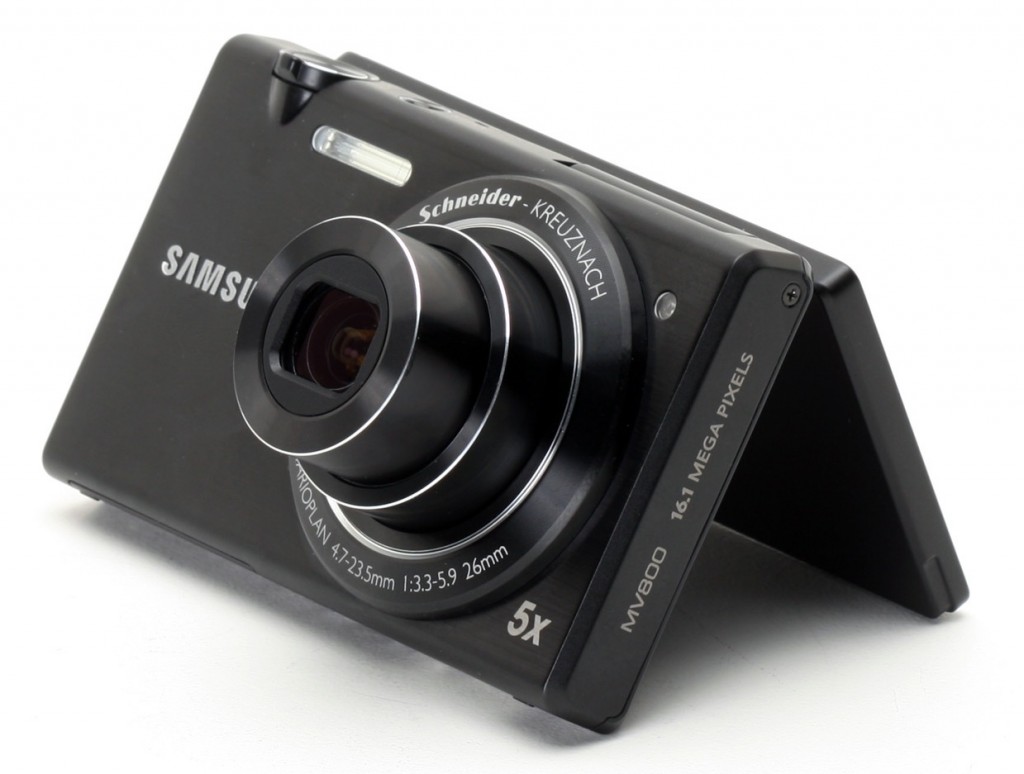 Are you a manic narcissist and love to muck around with gadgets? Or perhaps a video blogger? Maybe a 14-year old girl, or the parent of one? Then the Samsung MV800 is for you. It’s a clever piece of technology struggling to find a purpose, but clever nonetheless. And if you ignore the more fatuous frippery, it’s a nicely diminutive compact point and shoot with some useful features for niche applications.

It’s an elegant little magnesium-cased obloid in Samsung’s current favourite all-black, measuring a pocket- or purse-friendly 9.2×5.6×1.8cm. It has the barest essentials in buttons – on/off, shutter/zoom, play gallery, and a ‘home’ button. That, and a second shutter release whose point will soon become clear. All other functions are controlled by the 3” touch screen, which offers some manual control, and a dizzying array of special scene modes, creative modes, filters and special whatzits. That’s dizzying, as in the vertiginous spinning you feel when gazing off a cliff into a chasm, in this case the chasm of surreal feature-itis.

Play time
While this is a reasonable point and shoot camera, it’s really outstanding as a toy to play with. If you have a fourteen year old girl inside you (the reverse is a criminal offence in most countries), hours of giggly fun are in store. There are modes to add frames. There are modes to add your own custom frames. There are modes for self portrait. In fact, there are about five modes for self portrait – and this is where the flippable LCD display comes in. It pivots around the top hinge to let you see the screen when you’re shooting yourself (and if you take so many self portraits, maybe you should, up against a wall).

This is what the second shutter release on the back is for. Ergonomically friendly self-portraits. But it doesn’t stop there. It has a “pose guide” where you’re offered a selection of portrait shots of a model in a variety of coquettish poses; pick one, and the viewfinder now shows a translucent line drawing to let you mimic it. It’s mirror-reversed, so endless entertainment trying to get your hand just so. There is a slight problem – the model in the options is heart-stoppingly beautiful. Occidental, but of generally indeterminate ethnicity (one wonders if MV800s for different markets get different model options (da-dish!)). So anyone with self-image options is going to be driven into self-conscious self-flagellation. Thanks, Samsung, that’ll be months more with my therapist.

The creative modes don’t end there – there’s a ‘theme album’ (ok, whatever), and a “My Magic Frame”. This, friends, is cool. You take a pic, then choose a resizable cutout shape, which you can place a second picture inside. Sure, you can take cute pics of ponies and place them in beautiful green fields. Or you can stick a closeup of your eye inside your gaping mouth. You can create the most disturbing pics. See below.

Taking pictures
But once you’ve got over all these crazy creative modes, is it any good as a camera?

Not really. It’s a 16 megapixel shooter, but the tiny CCD means not a lot of light action is going on at a quantum mechanical semiconductor-tickling level. The MV800 takes pretty decent pictures, auto exposure and wotnot are relatively decent, but really lacks in natural levels of colour saturation and contrast. Things are just a bit flat and washed out. Auto-focus is also a bit slow – it locks on eventually, but can struggle. Optics in the 5x zoom lens are made by Schneider, with a 4.7-23.5mm focal length, maximum F3.3 on wide, and a problematic F5.9 in tele, so you’re not taking paparazzi shots in dim light. Dim light is really not this little guy’s strong point. Another problem is minimum focussing distance – since the camera is aimed at those with a self-snapping yen, an 80cm minimum distance (150cm on tele) is a bit close for the aforementioned fourteen year olds – unless they have seriously lanky arms.

Ergonomics are not great – the natty, sleek design means controls do not fall easily to finger – they’re too small and flush. The touch display is fairly responsive, but not terribly well designed – controls are not that intuitive, and icons for the various modes are scattered over the five home pages with little obvious organisation.

The flip-over display is nice for getting low down or over-the-head shots, but it would be awesome if it articulated as well.

Funnily enough, jokes about teenagers aside, this camera could have been an excellent ultra-compact video blogger camera. It’ll shoot 720p with a stereo (kind of) mic, and the flip over display is much more useful than the self-portrait mirror setup you normally get. A socket for an external mic and it would be perfect, kicking Flip cam way into touch.

Apart from that, it’s a fun little P&S for the teens and tweens, but if you want a competent compact to capture important moments, there are many better options, especially at the US$280 list price.

Who it’s for:
Tweenagers and those with an enormous capacity for self-amusement

Gear it or burn it?
Burn. Nice ideas, but too compromised in function and usability. The vignette filter is for fun, but when you turn off all the gidgzmos the pics are a bit flat 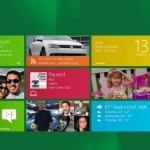