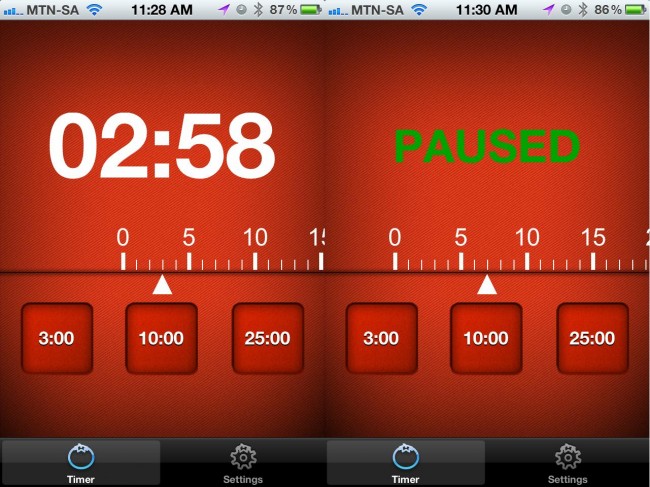 So it’s the New Year, a time to wipe the slate clean and start afresh, to look forward in a positive manner to where we’ll be this time next year (if the Mayans turn out to be wrong), but most importantly, a time to kick bad habits and work on developing new, healthier ones. Which is exactly what I am focusing on this year. Starting with bad habit number one: procrastination. After doing a little research and chatting to a couple friends, I thought I’d tackle the problem with a little time management strategy. Which is why this week I look at iTomato, a simply built and beautifully designed productivity aid for those that work according to the Pomodoro Technique.

For those unfamiliar with this technique, it was developed in the late 1980’s by student Francesco Cirillo, who was looking for a way to improve his study habits. Basically, you start by choosing a task, starting the pomodoro (a time block of 25 minutes) and focusing solely on that task until the timer sounds, signaling the end of the pomodoro and the beginning of your 5-minute break. After each set of 4 pomodoros, you’re allowed longer breaks of 15-20 minutes.

It is believed granting yourself frequent short breaks like these are the key to developing mental agility and that this technique is a method of eventually achieving what Hungarian psychology professor Mihaly Csikszentmihalyi (okay, more than a little research) defined as flow, the mental state of operation in which a person in an activity is fully immersed in a feeling of energized focus, full involvement, and success while performing the task.

Simple enough, and it is has been extensively researched and practiced by many top performing management groups and schools worldwide. Traditionally, Cirillo made use of a kitchen timer in the shape of a tomato (hence the name ‘pomodoro’, which is Italian for tomato) but as we do in this day and age, I thought, there must be an app for that.

I’ll start off by saying that the design is what made me go for this app, it’s clean and minimalist, highly functional and just looks incredible on the retina display of my iPhone 4. The clever gradient and texture-filled background, and big bold numbers have made me switch off the auto-lock and dim functions on the phone, sacrificing battery life, just so that it’s always visible. The buttons are an absolute pleasure to push and the icon is one that you won’t want to hide in a folder. Full marks right away.

The functionality of the app is expertly thought out and the developers have cleverly put in the option to customize each of the three buttons to whichever amount of time you wish, thereby not limiting the app to just the Pomodoro principle, but opening it up to use for all sorts of countdowns, sixty minutes and under. Yes, you can use iOS’s native timer app to do this, but it doesn’t look nearly as good as iTomato, and wouldn’t you rather hear that pleasant ring of the kitchen timer instead of one of the terrible alert tones that you probably already use for your alarm clock?

As this is only version 0.0.6 of the app, this is pretty much it for iTomato, but I’m sure the creators are thinking of what they could add to the app to improve its functionality. Perhaps a record of how many pomodoro’s or sets of pomodoro’s you’ve properly completed, from which productivity stats could be drawn and measured? Or a built-in task list that you could assign pomodoro’s too? I would really love landscape display support too as it’s not that fun to balance your iPhone on its bottom.

Nevertheless, iTomato has definitely helped me achieve higher levels of focus and flow in the office and I’m slowly developing a new competitiveness by pushing myself to complete tasks within the pomodoro. I’d highly recommend that everybody gives this technique a try, and when you do, use iTomato.