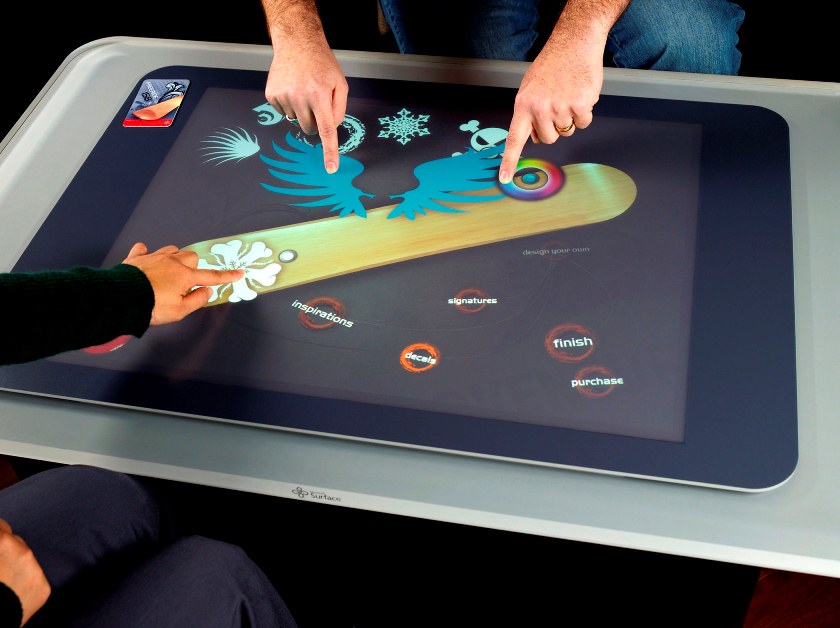 The Samsung SUR40, known as the Surface 2, is a 40-inch surface computer which was revealed at last year’s CES. Finally, it’s ready for shipping at the weighty price of US$8400.

This massive table-slash-PC, outfitted with an AMD processor and rocking the Windows 7 OS goes on sale in 23 countries today. It’s a second-gen device and far lighter, thinner and faster than Microsoft’s first Surface. The big M also mentions that it has “better finger tracking”.

The official press waffle says, “Both retailers and consumers are adapting to ever-evolving ways of interacting with information and merchandise, and have expressed a desire for technology that delivers information in an engaging and visually dynamic way”. So it’s a massive tablet then that people can use? Check and check. Where’s my credit card?

The specifications of the Surface 2 quickly impress. The CPU is an AMD Athlon X2 245e 2.9GHz Dual Core beast which may seem under-powered, but at this price users are paying more for that sexy 40-inch screen than performance. The GPU is also stock standard, with a “mere” 1GB of GDDRS. It’s the 4GB of RAM which provides the speed and possibly the muscle to run “PixelSense”, the Surface 2’s ability to track multiple fingers at once.

Other hardware and software odds and ends include Windows 7 Professional OS (64-bit), Gorilla Glass for protection and a weight of 50kg. Microsoft mentions that it can be wall mounted but hey, this is the coffee table of the future people.

So, the price is roughly US$3000 cheaper than the Surface 1. This pushes the commercial viability of the Surface 2 in a positive direction. Is it a better option than the Samsung Smart Window, a Minority Report-like screen? Price may ultimately be the deciding factor. And this video below. Pick your jaw up off the floor when it’s finished.