The physical manifestation of social statuses is made real with what developers Deeplocal are calling, the “LikeBelt”.

Being poked, in reality, can lead to bruises or perhaps a sexual assault charge. The LikeBelt, as seen in the insanely hilarious video, takes it a step further.

It’s hard to describe the levels of social awkwardness the LikeBelt promotes. The NFC-enabled belt is linked to a smartphone which turns the user into a physical representation of social activities.

It’s going to take some work though, the kinks in the system mean that RFID (radio frequency identification) chips need to be manually implanted into points of interest. Want to “like” or check-in to a destination? Then prepare to hump your way into social awkwardness. Retweet with a grind of your skinny jeans. Hopefully, as the open-source technology shrinks in size with future developments, users will be able to embed the NFC-tech into a wristband, for example.

For the novice gadget-smith, the belt can be built with very little fuss. Users are first required to snatch the open-source code from GitHub  to get the wall-humping party started. Next, an NFC-enabled smartphone (such as the Nokia N9 or the Nexus S), a snazzy belt and an RFID tag are required to finish the home-grown project.

The phones need to be slightly modified in order to neatly meld the software and hardware. The GitHub instructions describe how the LikeBelt creator “used a second antenna and extra phone back plate for the leads to extended to. This allows the nfc antenna to reach the buckle of the belt.”

Adding in the physical interactions is something aimed squarely at the savvy programmer, with the website saying that “you’ll get the gist pretty quickly after you look at the source code,” Watch the video and follow the instructions to create your own social humping belt. The wave of the future is now. 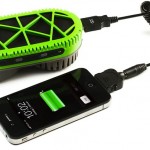