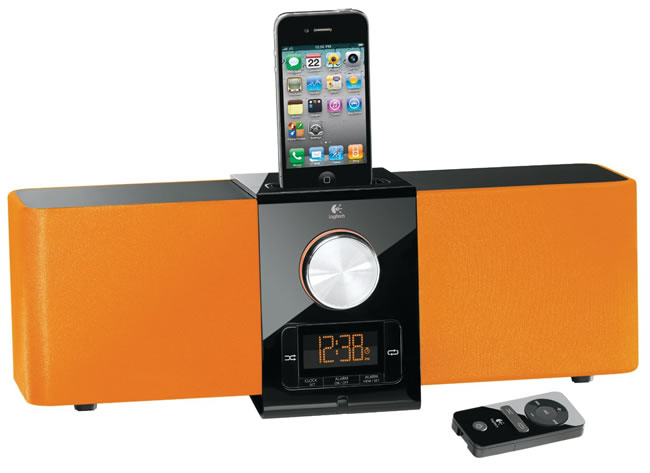 Within the confines of the audiophile spectrum exists a passel of audio listeners with varying degrees of auditory discernment. Somewhere, an insomniac just likes to hear the voice of the 3AM DJ on a kitchen radio, in the apartment below some hipsters are having existential debates about 1Q84 and streaming Bon Iver’s latest over a Bluetooth speaker, while further down the street a bass woofer with a car passes a bunch of guys busting moves to the beat of Run DMC on an old boombox from the 80s.

Then there’s the iGeneration. Until the iPod came along, a simple 3.5mm jack connected to a hi-fi auxiliary input would have sufficed to annoy your neighbours, but with the rise of the white headphone legion, manufacturers have scrambled to produce speaker docks to give the world something else to waste its money on.

With a veritable panoply of speaker docks for iPods and iPhones to choose from, it’s a jungle out there, especially if you’re looking for good sound on a tight budget. Is the Logitech Pure-Fi Express Plus the device that delivers on the premise? Let’s find out.

The Express Plus tries hard to distract you from its budget sound. Apart from its silver multi-purpose dial and black center console, it’s wrapped in a boldly coloured speaker mesh that comes in orange, purple, pink and blue but thankfully, there’s also a more understated black version. Truth be told, it’s one of the better looking speaker docks out there.

Granted, the Express Plus’s feature set is fairly limited — no AM/FM radio to speak of here –, it still scores high marks for its simple and intuitive controls. A shuffle and repeat (song or all) button flanks the information display, while a triumvirate of buttons controlling the built in alarm clock consisting of “Clock Set”, “Alarm On/Off” and “Alarm View/Set” sit below. The dial simply controls the volume and allows you to set the time and alarm when you’re in the settings mode.

A small remote is also included and controls volume, pause/play, and skipping tracks back and forward. You’ll have to rely on playlists as there’s no way of navigating your iPod menus from the remote.

Underneath the unit, you’ll find a hatch for six AA batteries that will give you up to 10 hours of portability — a two prong power adapter is included. A rechargeable battery would have been great, but would probably have pushed it out of budget range. At the back you’ll find a convenient carrying handle as well as 3.5mm jack which will allow you to plug in non-iDevices. It weighs a mere 1.5 kilograms and is 34 centimeters wide, 13 centimeters high, and 10 centimeters deep.

Finally, you’ll be happy to know that the Express Plus is GSM-shielded so you won’t have to worry about putting your iPhone into airplane mode to listen to music and charges your iDevice while docked.

The sound produced by the Express Plus is about as exciting as shopping for laundry detergent. The miasma of blandness wafting out of the omnidirectional speaker system – it has speakers on the front and back – has all the hallmarks of just another me-too product. Don’t turn it up too loud either, or you’ll run into some distortion.

Good on you for raising an eyebrow to my emphatic jaded demeanour; it’s a budget product after all right? Give it a break, you get what you pay for? I beg to differ. Before you buy a speaker dock, try out a PC speaker + subwoofer (2.1) system first. Something like Logitech’s Z313 which sells for US$60 less for example. Compared to the speaker docks, subwoofer systems can sound like French unicorns whispering sweet nothings in your ears. Yes you’re forgoing portability, and you can’t display your iDevice on a podium, but it makes financial sense, especially if you’re on a tight budget.

If you have an iPod or iPhone running iOS 4.1 or later, getting a US$2.99 equalizer app changes everything. That also goes for any Android phone — running FroYo and up — with an 3.5mm headphone jack. For iOS we tested Equalizer and for Android we recommend PowerAMP.

We played some Enter Shikari through Audioforge Lab’s Equalizer app, and the sound quality blew us away. All it took was an app to bring out the Express Plus’s true potential. Now, sound quality aside, would you still pay a premium for portability?

Until we started experimenting with equalizer apps, my opinion of the Logitech Pure-Fi Express Plus was that it is a solemnly me-too product. With mediocre sound and Mardi Gras colour options it seemed destined to live up to its budget genealogy and stand unassumingly among budget speaker docks in its class.

The apps changed everything, so if you’re willing to spend an extra three dollars on top of it’s estimated US$100 selling price for portability and docked charging, you should have a lot of fun with this thing.

You can get better sound out of the box for less — speaker docks or speaker systems –, but with a bit of fiddling it can sound really great. The omnidirectional sound is a nice touch, and is arguably one of the slightly better designed speaker docks available on the market. A rechargeable battery would have been nice though.

Gear it or burn it? Gear it. Just.

Casual listeners on a budget looking for a portable iPhone/iPod dock.

Above average design.
Omnidirectional speaker system.
Can sound surprisingly good with the aid of an app.
Portable.

Mediocre sound out of the box.
No rechargeable battery.