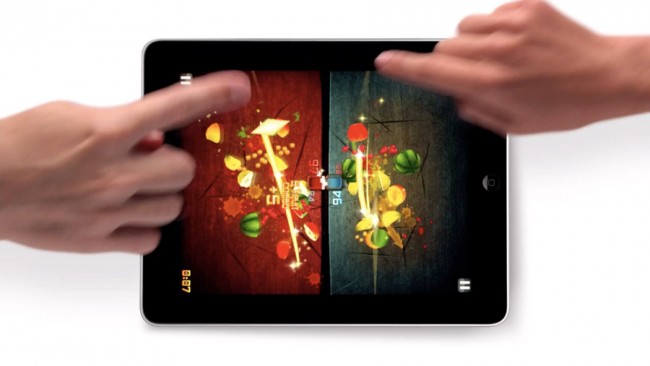 The iPad is custom-made for full-screen, HD multiplayer titles. Casual titles work exceedingly well on the world’s most popular tablet and, given the lack of physical controls, these “pick-up-and-play” games work even better with swipes and flicks. Smallworld is a battle against the odds, with wizards, giants and orcs battling for supremacy. The game plays out as a fast-paced version of Risk, with intensely beautiful HD graphics pushing this game far beyond the humble beginning of its board game-like roots.

Battle of the block

It’s blackjack, but with a sexier look. Battle of the Block keeps it simple by offering an addictive tug-of-war mechanic to this age old game. The game is fast, with butter-smooth graphics which animate beautifully.

Multipong is perhaps the best reinvention of (possibly) the oldest game in the gaming world. Up to four players can access the iPad at once, with lifelike graphics and interesting powerups to keeps the pulse racing. Single player is fine, but the four-player pong battle mode will blow you away.

Chances are, you have this on your iPhone. If not, grab it today and experience one of the only titles popular enough to knock Angry Birds off the top of the charts. Slicing fruit is always awesome, but doing it on the same iPad in tandem is the best. Online multiplayer is included, but the dual-screen mode can’t be beat for instant fun.

Tap Tap Revenge and its many sequels have fuelled endless wars and broken many friendships. The game is a simple rehash of guitar-hero, minus the fancy console graphics. Players tap coloured orbs in time to musical beats in order to complete stages. Two player mode is especially manic, with the orbs flying out at a furious pace.

It’s utter madness to think that a multiplayer game could even work on a title this complex. Thankfully, it has been pared down to the bare-bone aspects of the game, allowing for a simple chase game which tasks one player to catch the other, or for one player to obtain the most points. Whichever mode you choose, this parkour-inspired title is well worth the download. Brothers in Arms, as is standard with most Gamespot titles, requires a bit of real-money investment in order to glean the most life out of it. Thankfully, not purchasing top-shelf weapons and abilities does not hurt the multiplayer in the slightest. The wireless game is slow and steady, akin to the first Medal of Honour for PC. Incredibly, the game is free.

Nothing, nothing is more classic than Worms, a game which is now over 20 years old. Worms is also one of the best multiplayer games bar none. It was designed to addict, with one team of worms taking it turn-by-turn to beat, shoot, flame and maim the other team. Worms 2: Armageddon is best played with two players furiously battling it out in the same room.

Simple, clean, endless fun defines Flight Control. While single player mode is addictive enough, the multiplayer flight mode is a chaotic whirlwind of tiny pink planes and cursing. Guide your tiny planes into a safe landing and score the highest before your opponent. The breezy Hawaiian-inspired music alone ensures that the game becomes a must-have.

Classic boardgame fun in an HD package neatly sums up Monopoly. The game has been given a slight overhaul in the looks department and eliminates the need for that fussy paper money which would constantly get lost. More importantly, the game is far speedier than the versions of old as it all but turbo-charges the world’s most popular financial board game.

Labyrinth is one of the best uses of the iPad’s internal gyroscope to date. Tilt a tiny silver ball through ever-changing mazes, or challenge a friend to a time-trial. There are literally an endless number of mazes, with new challenges being released on a monthly basis.

It’s racing Jim, but not as we know it. Six modes allow you to challenge your friends in a variety of ways and the game is thankfully as accessible as Real Racing 2. Best part: the number of beautifully rendered, licensed cars such as the Nissan GT-R. If there ever was a game that stretched the iPad’s processor to its limits, its Infinity Blade. It’s a showcase of what the iPad can do, and what a well-programmed game can achieve. The graphics are stunning and the gameplay is both smooth and compelling. Never mind the US$7 price tag, just buy it, you’ll be happy. There are two games, namely Infinity Blade and Infinity Blade II. Both equally as good, but Infinity Blade II obviously trumps the original with multiple improvements. Both allow multiplayer gaming.

Ignore the Alec Baldwin furore, this game is simply damn addictive. Anonymous players or Facebook friends can be challenged for a Scrabble-like experience. The chunky graphics are eye-catching, the game is crack-cocaine like addictive ensuring that the experience can be enjoyed indefinitely.

Bringing the hardcore shooter experience to a casual crowd seems to be Call of Duty: Zombies’s job in life. The game is a “light” version of the console original but plays almost the same. Players guard a house from zombies, work in teams to take them down and try to survive the never-ending horde. Ensure that you have a decent wireless connection when you play this one.

Being a simple, DOOM-like online multiplayer is Archetypes charm. No complicated rules, no crazy powerups, just pure 6-on-6 violence in all its glory. Archetype even lets the user select which region they wish to play in, this helps speed up matchmaking and the actual online experience itself.

Let’s just call it Starcraft: iPad, shall we? In look and feel, Starfront is unabashedly Starcraft. This equates to insanely addictive online multiplayer with endless variety for customisation. Pick from three races, find random opponents and challenge the best in the world to the iPad’s top real-time strategy game.

Modern Combat 3 is the hardcore online shooter iPad users have been dying for. This is a dense game, with a thrilling single-player and online mode which is akin to Modern Warfare: Call of Duty’s. Level up, grab better weapons and challenge random opponents in this fast, frantic title.

Another freemium title comes to life. Gun Bros is either an exceptionally difficult single player title, or a very satisfying online multiplayer title. One thumb controls movement. The other, the direction of your weapon. With two players online, the game comes to life and the enemy hordes become excessively easy to mow down.