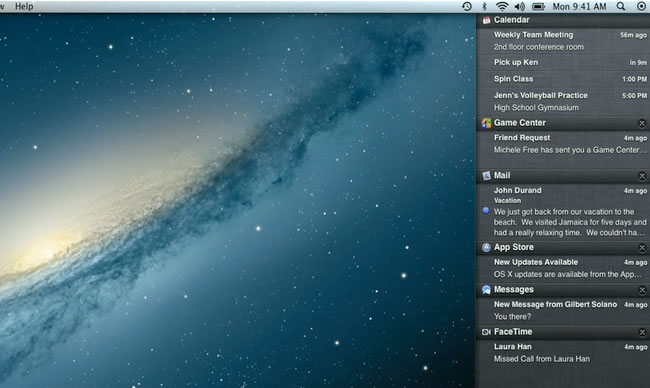 That was unexpected. Apple today, just seven months after introducing the world to OS X Lion, revealed a preview of the next version of its operating system, OS X Mountain Lion.

Building on the momentum of OS X Lion, the company continues to bring iOS features to its desktop operating system with its latest update. Despite strong iPad sales, the Mac is on a roll, growing faster than the PC for 23 straight quarters with 5.2 million Macs sold in the last one.

Here’s what’s new, in a nutshell. To date, more than 100 million users have signed up for iCloud and with OS X Mountain Lion, iCloud is integrated directly into the core. Sign into iCloud once with your Apple ID to keep mail, calendars, contacts, documents, and more synced with all your iDevices. iMessage comes to the Mac in the form of Messages. It lets you send messages Mac to Mac or Mac to iPad, iPod or iPhone. You can also send and receive contacts, photos and HD video. The seamless messaging aspect that Messages brings is quite compelling. You can start a conversation on your Mac and continue it on your iOS device when you rush out the door. It replaces iChat but will continue to support AIM, Jabber, Yahoo! Messenger and Google Talk. Don’t forget to download the free beta of Messages. Apple’s to-do list introduced with iOS 5 will now be available on OS X Mountain Lion as a standalone app. Integrated with iCloud, all your reminders are synced among all your devices. The notes app has always been available on iOS and it’s now making its way to the Mac. Create a note and add photos, movies and links by way of simple drag-and-drop functionality. Notes combines the best parts of TextEdit and Stickies. It lets you add bullet points, formatted lists and rich text, but also lets your tear out notes, which you can stick on your desktop and of course it’s also integrated with iCloud. Say goodbye to Growl. One of the most exciting new additions is Notification Center. Much like the notification system was redesigned with iOS 5, the Mac now gets a unified notification center to deal with Push Notifications. Notifications from new emails, messages, calendar events, reminders, system updates and third party apps now all get listed in the same place, providing a consistent experience. Clicking on a notification launches the application that triggered it, and Notification Center itself can be accessed with a new horizontal two finger swipe gesture. Sharing content such as photos and links on a Mac gets the iOS treatment. Apps in Mountain Lion will be updated with the Share icon, which shows you sharing options tailored to the apps you’re using. For example, while you’re browsing in Safari, you can click on the Share icon to post a link to Twitter. Twitter is integrated throughout Mountain Lion so you can sign in once and tweet directly from places like Safari, Quick Look, Photo Booth, Preview and third party apps. You can also send videos to Vimeo or photos to Flickr and share links, photos, videos and documents using Mail, Messages or AirDrop.

The social gaming platform exclusive to iOS, is coming to the Mac. This means you will now be able to play head-to-head or turn based games between your Mac and an iOS device. Just as with iOS, you will also be able to view game recommendations, see what your friends are playing, check out the leader boards as well as connect with other Game Center Members or challenge your friends to a game. Apple wants you to forget about your HDMI cable. Functionality only reserved for the iPad 2 and iPhone 4S is now coming to Macs. Combine AirPlay mirroring with Apple TV to stream things like presentations, videos, web pages, spreadsheats and games wirelessly from your Mac to your HDTV.

Gatekeeper in OS X Mountain Lion helps prevent you from unknowingly downloading and installing malicious software. You will be able to choose from three security options:

It’s a system whereby developers can sign up for free-of-charge Apple developer IDs which they can then use to cryptographically sign their applications. If an app is found to be malware, Apple can revoke that developer’s certificate, rendering the app (along with any others from the same developer) inert on any Mac where it’s been installed. In effect, it offers all the security benefits of the App Store, except for the process of approving apps by Apple.