Clik. You’re controlling your computer with your smartphone. There are existing apps which let users control computers with mobile phones, but Clik turns the process into pure genius. Any computer with a browser can be controlled by Clik. Let your journey begin with a single download.

It’s a damn simple process, as no extra hardware is required. What impressed us though, is the speed at which Clik operates. Firstly, install Clik. Next, open the app and navigate to ClikThis.com. Scan the giant QR code and get ready for remote YouTube’n. Yes, Clik is limited to remote YouTube control for now, but think of the possibilities people! Because Clik can sync multiple phones, multiplayer games with each device as a gamepad are a possible reality.

Within Clik, any YouTube video can be searched for, controlled and played-back. It’s pretty amazing and the elimination of any extra controlling hardware surprised me. CEO of Clik, Ted Livingston had the idea for this app for years, and spent most of the time creating a setup which would deliver the speed needed for hassle-free remote browsing. Livingston’s team also worked on a messaging app, named Kik.

Livingston has impressive plans for Clik, especially with regard to over-hyped “Smart TV’s”. He says, “Every screen just becomes a dumb output for your smart remote,” and as such he is targeting the youth, in particular those in tertiary education. Who needs to build and force new (and unnecessary) devices into the market when Clik is around?

My experience with Clik was as palate-pleasing as dining at a two-Michelin star restaurant. After downloading Clik, I visited clikthis.com, scanned in the code and instantly began using my phone as a remote control for YouTube. I have a large screen, and the effect is mind-blowing. Videos are controlled with little to no lag, and the UI is dangerously intuitive. Experience it for yourself, it’s my app of the moment, and is available for both iOS and Android. 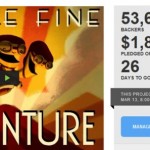