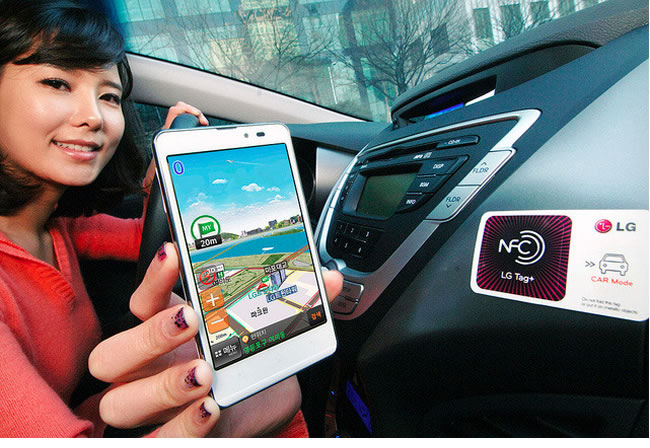 There’s something refreshing going on over at LG. First the crazy looking Optimus Vu and now the innovative Optimus LTE Tag, announced yesterday, with its NFC stickers.

Similar to Sony’s Smart Tags, LG’s Tag+ system uses NFC tags/stickers to change your phone’s settings. For example, place a pre-defined NFC tag on your car’s dashboard and swipe it to launch your phone’s GPS and Bluetooth app. When you get to the office, swipe another tag to mute your phone and turn on Wi-Fi.

To the delight of your 3 year old, the LTE Tag comes with sheets of both pre-defined and blank NFC stickers which can be customised to perform various actions.

Priced at 800,000 won ($710, €540), the handset will launch in South Korea with Android 2.3 Gingerbread, but LG did promise an eventual upgrade to Android 4.0 Ice Cream Sandwich. The Optimus LTE, released in October last year, is currently available in the US, Canada, Japan, and South Korea so we might see the LTE Tag coming to other markets too.

We look forward to seeing more announcements like these as MWC draws near.

Check out the full press release below.

OPTIMUS LTE TAG FROM LG OFFERS NFC, BUT WITH A TWIST
Unique Tag+ Feature Allows for User Customization
Without The Hassle of Fiddling with Phone Settings

“Our goal is to offer the widest variety of LTE smartphones in the industry in 2012,” said Dr. Jong-seok Park, President and CEO of LG Mobile Communications Company. “The Optimus LTE Tag isn’t just a cosmetically-enhanced version of Optimus LTE, it offers a truly innovative feature which we think really makes a smartphone smarter.”

The Optimus LTE Tag gets its name from a unique new feature, LG Tag+, which uses NFC (Near Field Communication) to communicate with special stickers or “tags” that can be programmed to automatically change the phone’s settings. Swiping a tag upon entering the office could put the Optimus LTE Tag in silent mode and activate Wi-Fi. A tag on the car dashboard could be programmed to turn on Bluetooth, GPS and raise the volume. The options are limitless.