Our app of the day (but not quite) is the Olympic Augmented Reality Navigator for iPhone and Android. From developers AR-works comes a nifty app with the ability to overlay past and present Olympic information in real-world locations.

It’s actually a “3 in 1” navigator, as the application covers the 2012 London Venues, Olympic Flame locations and Olympic cities dating back as far as 1896, and extending into the future date of 2016.

Do you know the dates and cities of the 26 previous games? My answer is a resounding “maybe” and with the app, Olympic venue knowledge can be infinitely expanded.

The app is shockingly easy to navigate. Various views display the Olympic information in a clean, easy-to-read format. One is a traditional Google Maps view, with venue information overlaid on each host country. Tap each destination and the map drills down into a detailed image of the host city, with individual event information dotted across the map like blocks on a board game. Tapping the top right corner of the app takes users to the map view.

Following the track of the current Olympic Flame is even easier. On either smartphone or tablet, the app displays a highlighted path to and from each destination.

Arguably, the sexiest part of the app is the augmented reality feature. Aim your device anywhere in London and the viewfinder displays MTV-like popups which tell the direction and information of a nearby Olympic event. Tap the icon and the app navigates to the Wikipedia page.

Users can skip the gloss though, and simply use the list view to see the direction and date of previous Olympic venues.

Getting the app is a chore, as it’s not really an app, but information overlaid in the AR software, named “Junaio”. First, grab Junaio from the Android or Apple store, install it and scan the QR code (embedded in this article) or type “Olympic” in the search field to get the party started. The app requires a constant online connection. 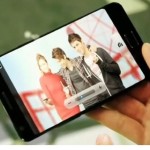