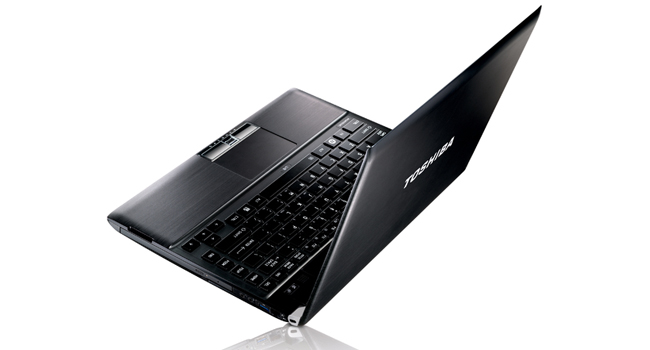 The Toshiba Portégé R380-10R is the first “Ultrabook” (I use inverted commas because the term sickens me) I’ve managed to lay my hands on. It’s thin, dangerously fast and exceedingly powerful. The benchmarks, which I’ll discuss later, paint the picture of laptop ahead of the curve. Let’s find out how I fell in love with the Portégé R380-10R.

For a GPB£1 599 (approximately R19 200) laptop, the crazy price seems unjustified by the flimsy design. The screen, and the hinges attached to the screen, especially worry me. The lid is too flexible for my liking. Slightly bending it, which happens often when the laptop is closed, can cause the screen to accidently distort with even the slightest nudge. I’m hardly being dramatic when I say that the default carry case which comes with the Toshiba is barely able to protect it from the wind, let alone the bumps and bruises of everyday life. The little chrome hinges on the side of the lid simply add to the overall tackiness of the laptop.

And it’s a weighty machine. At almost 1.5kg, the Portégé feels solid, but far too heavy to lug around for hours on end. My complaint stems from happier experiences with lightweight tablets (which I can cart around in one hand) – so it almost seems unfair to compare the Portégé in this regard. But, for this price I want it to replace my tablet and my desktop, so the harsh comparison will have to remain.

There is an optical drive included, but I see it more as a legacy device than anything else at this juncture. For god sakes, a 4GB flash drive is almost as inexpensive as a DVD.

The bundled bloatware Toshiba loads with the Portégé should be quickly uninstalled and adds no value to the device. Why companies continue to add inadequate apps to powerful devices is beyond me.

The Chiclet keyboard though has reserved a special place of hatred in my heart. Yes, it’s a QWERTY keyboard but the keys are spaced too far apart to be considered remotely comfortable. It took a week for me to conquer the learning curve of the keyboard. Adding to the interface misery is the touchpad, which is also functional at best. So far, so bad.

But screw the above negativity, this is one of the fastest laptops money can buy. It’s a 2.7GHz Core i7 CPU, with 4GB RAM (expandable to 8GB), a bog-standard Intel HD graphics accelerator and a 500GB hard drive all wrapped up in Windows 7 64-Bit edition. And it’s beyond fast. For the most basic of navigating, the Portégé flies.

The benchmarks (care of PerformanceTest) I ran on the Portégé showed that it comes first, second or third when compared to similar, even more powerful machines. the CPU, RAM speed, 2D graphics prowess and disk access are all beyond exceptional. It’s hard not to be blown away by that.

The graphics are the weak link in the package and I have no doubt that if a proper GPU was included, the machine could be a gamers dream. As such, it’s still more powerful than most vanilla desktops and laptops on the market. And at this price, it has to be.

The 6-cell battery has another treat in store for us. Toshiba promises a 15-hour battery life but in real world tests, I managed to eke out 9 to 10 hours at the most (in “eco” mode), which is still a days’ worth of operations sans charge. The 13.3-inch screen is bright, sharp and easy on the eyes. It’s an LED screen, with a max resolution of 1366×768 or HD (but not Full-HD… sadness). Regardless, content is a treat on the Portégé. I streamed a 1080p video without a hiccup, and it ran as smooth as butter. The sound on the other hand is tinny and bass-free, as it is with most laptops.

USB 3.0 is thankfully included (and tastefully rimmed in blue on the right of the laptop). Everything else is fairly standard. An HDMI port, stereo microphones, a SATA port, a card reader and fingerprint system round off a packed range of features. A full list of details can be found here.

Intensely fast, but flawed in certain areas of design – if only the Portégé was slightly cheaper I could recommend it more. As it stands, this is a high-end laptop for those with the deepest of pockets. If you can afford it, grab it without haste.

Gear it or burn it?