By Steven Norris: grumpy curmudgeon
Read nextWaze: the app that saves you from traffic and fines [Review] Nintendo’s Wii U edges ever closer and now, a wild price emerges. According to this report, the fabled follow up to Nintendo’s once-popular Wii will cost roughly US$300 and launch in the last quarter of 2012.

Sources “closely involved” with Nintendo’s manufacturing processes have been cited that the console will cost US$180 and the fancy touchscreen controller will roll in at US$50. Here’s what the sources say.

“Cutting production costs to maximize profits is Nintendo’s main concern with the Wii U. They are cutting costs in the Wii U’s hardware to build back confidence in investors. Nintendo wants investors to view Wii U as a less risky proposition. ”

Let’s break down the costs:

The Wii U controller will rock out with NFC capabilities, which should cost no less than US$5 to add to each controller. Sources say that as NFC continues to become a part of most gadgets, Nintendo will capitalise on the burgeoning technology.

The camera in the Wii U controller is setting Nintendo back a mere US$6, for a device which will reportedly be “slightly better than the 3DS’.”The touchscreen is a little pricier, and empties the coffers at US$14 a screen.

Says the source of the hardware pricing, “Nintendo chose an economical GPU and CPU that could keep up with the performance of today’s current consoles, but keep hardware costs down to maximize profits. Nintendo got a bargain price on the custom GPU and CPU that the Wii U uses. There is a bigger focus on downloadable content, applications, video content, digital distribution, and services to create a stream of revenue. Investors will be ecstatic with the news.”

It’ll be great to see how the Wii U can compete with the other big consoles. Currently, both the PS3 and Xbox 360 can be snapped up for under US$300 so a Wii U at the same price-point may be the device Nintendo needs to climb back into relevance. 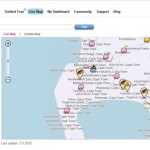 Waze: the app that saves you from traffic and fines [Review]
Applications • 10 Apr 2012
Read More
More