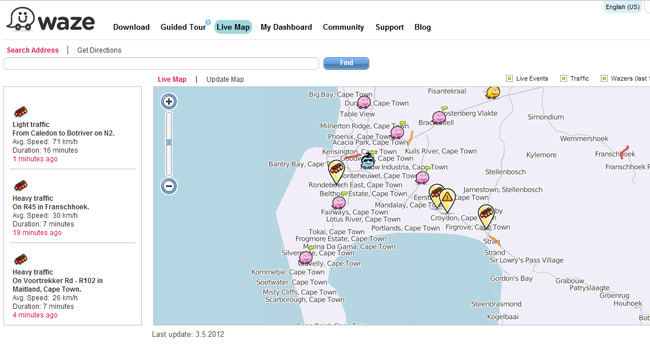 Let’s be honest: I drive a car. I hate traffic. I get lost a lot. So when I heard there was an app that combined GPS navigation with traffic updates, it was installed on my phone within the hour. I was willing to try anything. Fortunately, as it turned out, Waze is actually pretty darn good.

Waze is an app for iOS, Android, Blackberry, Windows Mobile and Symbian — basically, pretty much everyone with a GPS function on their mobile device. It maps your routes automatically as you drive and sends information about your speed to other Wazers. So if you’re sitting in a traffic jam puttering along at a miserable 2kph, the users 10 minutes behind you will be told to take another route. Hey, you’re stuck there anyway, so you might as well help out your fellow drivers. It works really well — the app diligently alerted me to traffic jams by covering my screen with a smattering of warnings as soon as I started in the direction of the freeway.

The roads on the map are colour-coded depending on the average speed of other Waze drivers — if you drive slowly, Waze will automatically paint the road behind you red as a warning to others, and if you’re cruising along happily, you’ll light up the road with a bright green stripe.

Waze’s maps are crowd sourced — they aren’t based on a maps service, they’ve been constructed by Waze users. Because of this, navigation isn’t the greatest — if you’re searching for a lost little side road or don’t live in a major town, it probably hasn’t been added to the database yet. But as user numbers grow, this will become less and less of a problem.

If you find inaccuracies and you’d like to be a nice person, you can correct and add roads on Waze’s website. The site only allows you to edit roads that are within a mile of where you’ve driven, so you can’t be a troll and rename the streets in another country. Users who want to actively contribute to motorists’ happiness can report the police sightings, road works, traffic jams and accidents they find on route. These warnings are pinned to the road to alert the next passing Wazer. You’re technically not allowed to report problems while you’re driving (because, hello, you’re supposed to be watching the road), so the app asks you if you’re the driver or a passenger before it gives you the option to report a hazard. I obviously lied, and then almost crashed into the car next to me because I was holding my phone instead of the steering wheel, so I do not recommend this.

The app also lets you check a general stream of traffic alerts in your area — which is very helpful if you’re setting off and wondering which route you should take. If you’ve allowed Waze to track your favourite routes, it can suggest alternative roads for you, so you can bypass traffic jams and accidents.

The app is a bit glitchy (at least, the BlackBerry version I tested was) — it only crashed once, but it did freeze temporarily and occasionally didn’t close windows even when I repeatedly asked it to. It does take a small chunk out of your battery but the data usage is surprisingly low.

It chirps at you whenever there is a hazard or when you’ve earned bonus ‘candy’ (for driving 10 miles, using the app more than once a week, reporting your first hazard, etc) which can get a bit annoying, so I suggest you turn off the ‘goodies’ or ‘chit chat’ functions if you’re not interested in chatting to other users or collecting candy. Even though the navigation isn’t perfect, it will only improve with time, and the traffic updates and warnings are definitely worth the data costs and battery life.